The A's are rolling, the Astros are already in last place and everyone else is somewhere in between. Will Oakland claim a third straight division crown?

Share All sharing options for: AL West Roundup: Business As Usual for Oakland

It's been business as usual for the A's, who have begun their quest for a three-peat in the AL West with a 12-5 start to the season.

Despite all the talk of the impending rotation struggles that the losses of Jarrod Parker and A.J. Griffin would create, starting pitching as actually proven to be the team's greatest strength in the early going. 24-year-old ace Sonny Gray has led the way, picking up right where he left off from last season's NLDS by allowing just five earned runs over 25 spectacular innings thus far.

The question now becomes whether the A's can maintain their hot start even with somewhat of a makeshift rotation. The real surprise has been left-hander Scott Kazmir, who has been just as good as Gray, if not better, with a 1.65 ERA over four strong starts, along with fellow overachiever Jesse Chavez. Expect the rotation to come back down to earth a bit, but there's no reason to believe the A's can't at the very least maintain a solid rotation this year in spite of their injuries.

Offensive Success by a Familiar Formula

Part of the explanation, unsurprisingly, is Oakland's ability to simply get on base, as is always the case with Billy Beane's team. The A's are second in the majors with 78 walks, coupled with a .337 OBP, both totals that are helped tremendously by Jed Lowrie's 15 base on balls, ranking behind only Carlos Santana and Jose Bautista.

That's translated into a lot of opportunities to score runs. In fact, the A's lead the majors in at-bats with runners in scoring position this season, meaning they've scored lots of runs even with average clutch hitting due to the team's success at consistently reaching base, thus putting runners in position to score early and often.

Can the A's continue to score runs even with relatively average hitting? As anyone who has followed baseball for the last several years knows, the A's have succeeded for the better part of the 21st century using the "Moneyball" model for offensive success. Now, if slumping players like Josh Donaldson (.284 OBP) and Josh Reddick (.533 OPS) can turn it around, this team has the making of an offensive juggernaut.

The A's bullpen is an interesting case because the one pitcher who matters most, closer Jim Johnson, has struggled mightily while everyone else has been top notch.

Indeed, despite Johnson's 7.56 ERA, the A's bullpen ranks sixth in the majors (second in the AL) in ERA, thanks in large part to offseason acquisition Luke Gregerson's ability to aptly fill in for Johnson in the closer role. It will be interesting to see if the latter can rebound from a tough start, because if he does, the rest of the league will have a tough time scoring late-inning runs against the A's.

The New York Mets finally traded Ike Davis, sending him to the Pittsburgh Pirates in exchange for right-hander Zack Thornton and a player to be named later. Could this move be exactly what the Pirates needed?

Offense must carry the team

The Rangers are trying to defy baseball convention by winning almost entirely with offense, an experiment that's gone relatively well thus far. Even with Yu Darvish's early-season injury necessitating an Opening Day start from Tanner Scheppers, who had never made a start in his major league career, combined with Prince Fielder's horrendous start, the Rangers have managed to start the season with an 10-7 record.

To begin the season, the offense sputtered as a whole, despite being touted by many (myself included) as perhaps the best in baseball heading into the season. The Rangers are still struggling to hit homers, with just 10 long balls on the season, yet they rank eighth in the majors in runs thanks to a fourth-ranked .341 OBP.

Early Cy Young front-runner Yu Darvish has played a large role in Texas' success, going 16 innings before he decided to surrender his first runs of the season. With a 0.82 ERA and 0.86 WHIP over his first three starts, Darvish has guaranteed that the Rangers will at least have some stability in the rotation–a huge plus for a team that projects to struggle in that regard.

It's looking like the Rangers' exiled ex-second baseman Ian Kinsler's wish for his former team to go 0-162 isn't quite going according to plan. As long as the rotation can hold up, this team will be just fine.

The A's and Rangers are dealing with iffy rotations for any number of reasons, a trend that continues with the Mariners. After Felix Hernandez, the M's are asking a trio of young starters–Roenis Elias, James Paxton and Erasmo Ramirez–to bolster the rotation, at least while Hisashi Iwakuma is out.

So far, the leap of faith is working quite well: Elias and Paxton have posted ERAs of 3.22 and 2.25, though Paxton was recently placed on the 15-day DL. For now, with Iwakuma and future ace Taijuan Walker out for at least a few more weeks (along with Paxton), the Mariners can only hope that the temporary rotation they've strung together can hold up for the time being. (Luckily, Seattle will face the Astros twice in the team's next four series.)

According to The Seattle Times' Ryan Divish, Iwakuma threw a simulated game on Friday afternoon, going 35 pitches while facing teammates James Jones, Logan Morrison and Stefen Romero. Here's what Divish's article had to say about Iwakuma, with some quotes thrown in for good measure:

"I thought Kuma threw pretty darn good," McClendon said. "He was pain-free. I thought he had good extension. I was pleased."

Drenched with sweat and all smiles, Iwakuma was upbeat after the outing.

"I felt good today in general," he said through translator Antony Suzuki. "It was my first time facing hitters. I was kind of nervous trying to find my balance. But I was able to throw strikes, so that was good."

Iwakuma showed good velocity with his fastball and didn’t hold anything back.

"I was going 100 percent just like a game," he said. "And I had no pain. I was pain-free in my finger. Everything was good."

While Iwakuma was giving 100 percent effort, he felt he was about 70 percent of himself on the mound.

"I still need to command my pitches and get that feel back of pitching," he said.

Iwakuma will throw a bullpen session on Sunday and then head out to a rehab assignment with Class AAA Tacoma possibly on Tuesday, according to McClendon said.

It appears that Iwakuma could finally return to the Mariners rotation in due time. If the young guns can continue to excel, Seattle could actually have a solid rotation from top to bottom once the Japanese right-hander returns.

At least the ball is bouncing his way on the defensive side:

In all seriousness, this was something that many fans predicted when Cano announced he would move to the pitcher-friendly Safeco Field. But for him to struggle this much–just one homer?–is a bit unprecedented. ESPN's Justin Havens explains that Cano's inability to pull the ball, combined with his oddly high ground-ball rate, is creating problems. Whatever the case, the Mariners surely hope their $240 million man will pick it up–soon.

The Angels were on many lists as preseason front-runners for the division title, a claim that made plenty of sense. Indeed, with Oakland's injury woes and Texas' rotation troubles, the overarching viewpoint was that the division's top spot was available for the taking. For the most part, none of that has rung true in the early going, though the Angels have a few promising features that could ultimately give them the edge in the division.

The newfound enthusiasm expressed in the Angels prior to the season was unwarranted for a few reasons, namely the front office's inability to make substantial improvement to a rotation that struggled mightily last season.

The exception to that claim is the addition of Tyler Skaggs, a young left-handed future ace who just might be the savior the Angels starting pitching needs. He has plus-velocity and a pretty dirty curveball, both of which he showcased in a gem in his first outing of the season (eight innings, no earned runs), despite running into trouble since.

The Angels 'pen has shown flashes of respectability this season, but has struggled for the most part, with a 27th-ranked 5.26 ERA.

The problem starts with closer Ernesto Frieri and his 4.91 ERA, but he's far from the only problem: Setup men Joe Smith and Kevin Jepsen have also struggled, with ERAs of 5.14 and 7.50, respectively. For a team with an unproven rotation as it is, the Angels will need all the support they can get from their bullpen. Thus far, that hasn't happened. 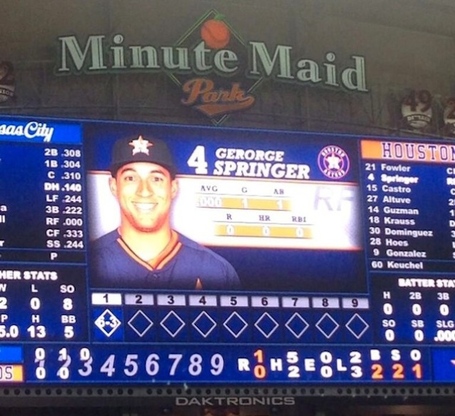 That's been the dominant theme of the Astros' season, and why not? The only question about this team was whether or not it would lose 100 games, and right off the bat, Houston has lost 13 of its first 18 games.

During the Astros' struggles, Springer has posted four hits in the small sample size of 14 at-bats, on top of registering his first big league RBI. If all goes well for the young outfielder, Springer could contend for the Rookie of the Year award and post 20-20 numbers. He could be the lone bright spot of Houston's season.

Wow. One of the more overlooked stories to begin the season, Feldman has already been through a lot. Signed in the offseason in an attempt to give the rotation some semblance of respectability, Feldman has gone above and beyond in his first three starts. The veteran right-hander allowed a single run in 20 innings to start the season, all while dealing with the unexpected loss of his father.

Feldman recently spent time on the bereavement list, and he understandably struggled in his first start back. He'll be an interesting starter to watch going forward.

Bo Porter also has his panties in a bunch, perhaps rightfully so: