The Pirates plug a hole in their first base platoon, but there's another place in the line-up that is not producing. Sitting in third, six games back, Huntington and the Pirates may be forced to break character and call up Gregory Polanco six weeks earlier than they would prefer.

While it is far too early to make any proclamations about contention (or lack thereof) or the state of a ball club a mere 20 games into the season, it is probably safe to say that Neal Huntington and the Pirates cannot be ecstatic about finding themselves six games back from division-leading Milwaukee with the Cardinals sitting ahead of them in the standings and the dangerous Reds just half a game back.

If one were looking for proof, one need look no further than last Friday's trade with the Mets that brought Ike Davis to town in exchange for minor-league righty Zack Thornton and a presumed 2013 draftee who isn't eligible to be traded. 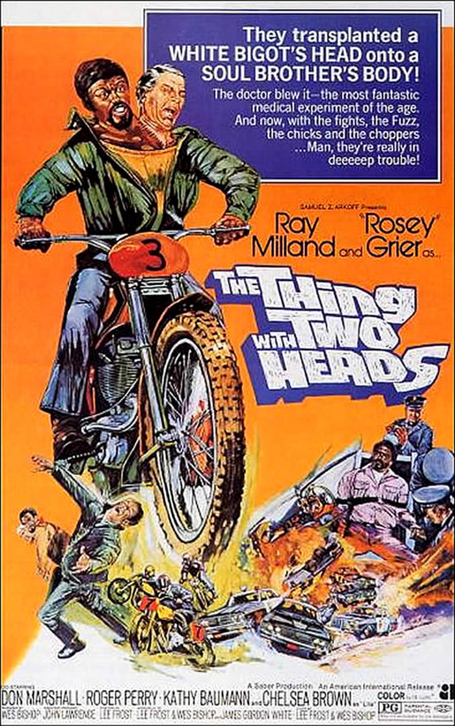 Moving right on past the indefinable entity that is the player to be named later, the Pirates will look for Ike Davis to become the Ray Milland to Gaby Sanchez's Rosey Grier in a two-headed monster at first base. Given that Davis sports a career triple-slash of .257/.358/.471 with a .358 wOBA and 128 wRC+ against righties while Sanchez fills out the other half of the platoon with a line of .299/.397/.499 with a .389 wOBA and a 146 wRC+ versus lefties, the Pirates have themselves an effective if admittedly grotesque beast as shown to the right.

Even with his warts, Ike Davis represents a clear upgrade from Organizational Depth Travis Ishikawa as the man set to get 75 - 80% of the plate appearances at first base.

While the trade for Davis addresses a hole in the line-up that needed to be plugged if Huntington wanted his squad to keep pace in the NL Central--a division that grew even more crowded than one might have anticipated with the resurgent Milwaukee Brewers getting off to a blistering start--the fact remains that the Pirates are looking up in the standings and seeing two teams comfortably ahead of them. When one takes into consideration that the reigning NL champs are one of those teams and that they arguably got better on paper in the off-season, one is forced to asked the question, what else can Huntington do to close the six-game gap between the Pirates and first place?

Some of that help was expected to come in the form of Jameson Taillon, who was set to start the season in Triple-A before tearing his ulnar collateral ligament in early April. The sting of not being able to add the #10 prospect in baseball (per Baseball America's Top 100 list) is big, especially when the long-term fallback options in camp were likely reliever Stolmy Pimentel, the possibly terrible Vance Worley, and Brandon Cumpton. The only other quality internal help that the Pirates might be able to count on to bolster a thin rotation--one that just got thinner with today's placement of Wandy Rodriguez on the 15-day DL with inflammation in his right knee--would be Nick Kingham, who the Pirates sent back down to Double-A Altoona to start the season, which realistically puts any hopes of contribution at the Major League level off until late July at the earliest.

Barring a trade or the bold move to transition to a four-man rotation, Pittsburgh will need the volatile pair of Francisco Liriano and Edinson Volquez to not implode while Gerrit Cole and Charlie Morton round out the top four spots in the rotation. Presumably Jeff Locke or Cumpton will be added to the 25-man roster in the next few days to fill out the last spot in Rodriguez's stead, but neither provides the team with an instant upgrade in terms of production.

This leaves one glaringly obvious place in which the Pirates can improve.

Pittsburgh has been employing a combination of Travis Snider and Jose Tabata in right field. Through Sunday's action, the pair contributed a combined -0.5 fWAR and 0.0 rWAR with neither having given the team anything in the way of positive production by either measure. To add issues to lack of production, Snider is sporting a shiner from a brawl on Sunday that saw him get ejected along with Carlos Gomez. While Gomez produces for his team, Snider cannot boast the same value to his team.

The clear answer to Huntington's prayers in right field is whiling away his time in Indianapolis, waiting for The Call.

In this instance, "whiling away his time" translates to absolutely destroying AAA. In what can aptly be compared to when Eric Hosmer forced the Royals' hand in 2011, Polanco's slash line sat at a gaudy .406/.449/.625 through the first 16 games of the season. In his first 69 PA, he scored 11 runs, drove in 16, clubbed two homers, and maintained a 7:4 K:BB.

With his absurdly hot start, it would seem like stories like this will only suffice for a few more weeks before Polanco and the prospect of keeping pace prove to be more valuable than gaming service time. If Snider with his .313 wOBA and Tabata with his .263 wOBA continue to share the duties in RF, Huntington may find himself with no other choice than to call up the five-tool potential star.

Of course, this situation is begging to be compared to George Springer's call-up. Having gotten the call almost exactly a week ago when this piece goes up, Springer's situation is a little different than Polanco's. 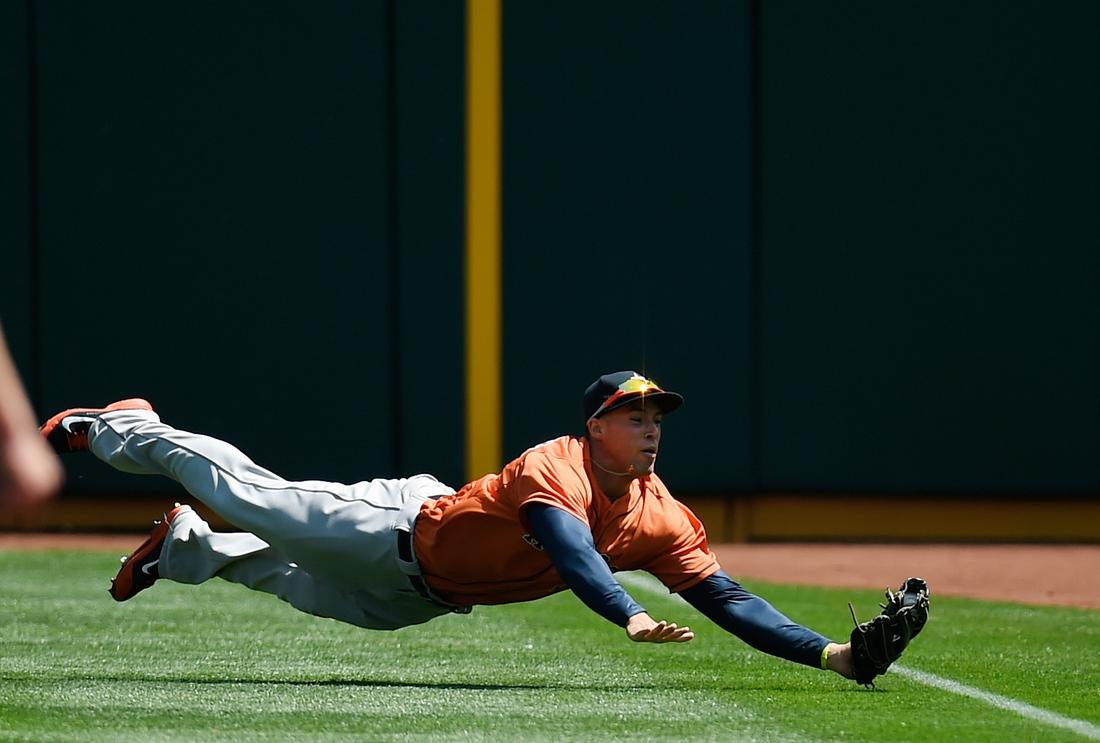 While Houston's payroll has looked every bit the part of a small market franchise, Houston is a sleeping giant. Despite the fact that their local TV revenue is currently tied up in a messy court battle with CSN Houston and only 40% of their home market can actually watch their games, Houston's deal that they are trying to dissolve is supposed to net them approximately $80MM per year. If that pact is dissolved, the Astros can reasonably expect to get even more money in a new deal as local TV deals show no signs of de-escalation.

Their market size and financial situation is markedly different than that of Pittsburgh's. Unlike the Pirates, the Astros can more easily absorb the blow of an extra year of arbitration for George Springer. As long as Springer spent the first two weeks in the minors, Jeff Luhnow and the Astros would get what they needed from gaming Springer's service time--the precious extra 170 days of service time that wouldn't count as one of his six pre-free-agency seasons. Springer's status as a presumptive Super Two (barring an two-month demotion back to the minors in the future) does not change the fact that the Astros essentially get a seventh season from their tantalizing outfielder.

Neal Huntington and his club are walking a much rougher path. With their piddling deal with ROOT Sports netting them approximately $20MM per season and locked in through the 2019 season, the Pirates cannot write off their $71.9MM payroll as playing dead. With such a restrictive budget in place, it is hard to envision a scenario in which the Pirates shouldn't do everything possible to delay the promotion of Gregory Polanco until June, when the Super-Two cut-off is expected to have passed. With contention and the presumption of gate receipts mattering at least a little more to the cost-conscious Pirates, Huntington may find himself with no other recourse than to call up Polanco earlier than he planned for the sake of keeping pace.

Thus far in Huntington's tenure, he passed on promoting the highly touted prospects of yore Pedro Alvarez, Starling Marte, Andrew McCutchen, Jose Tabata, and Gerrit Cole until he was sure that they would not be Super Twos. Of course, only Cole and Marte could have helped in seasons in which the Pirates would have been in the playoff picture, so the stakes are a little different for Polanco than they were when considering calling up Alvarez, McCutchen, or Tabata. When the Pirates called up Starling Marte on July 26, 2012, they were just 2.5 games out of first and sitting in second place in the NL Central, 13 games over .500, so it's hard to argue that they needed Marte much before that point. After all, their precipitous fall in the standings happened after Marte arrived on the scene.

Polanco's performance combined with the Pirates need to keep pace may actually force Huntington to do what he's thus far been unwilling to do: promote a star prospect without concern for a fourth year of arbitration eligibility.