A disastrous April raises the question: was signing Ricky Nolasco to a four-year, $49MM deal really the best way for a team to spend its money?

Share All sharing options for: Buyer's Remorse: The Minnesota Twins and Ricky Nolasco

While it is far too early to write off any player whose performance causes nothing but consternation amongst the restless masses, one assumes that Ricky Nolasco's performance thus far is doing anything but assuaging Terry Ryan and the Minnesota Twins' concerns regarding the wisdom of their four-(and-possibly-five)-year investment.

Just six months ago, the Twins made a splash when they signed the 31-year-old right-handed workhorse to a four-year deal worth $12MM per year plus a $13MM club option with a $1MM buyout that turns into a player option with 400 IP over the 2016-'17 seasons.

Paired with the Twins' signing of Phil Hughes, Nolasco was brought in to stabilize a rotation that had been so abysmal that their closest comp--no strikeouts, alarming ERA--would be that of the historically bad rotations of the early 2000s Royals, headed up by the likes of Scott Elarton, Brian Anderson, and Mark Redman.

Perhaps that isn't fair. Ricky Nolasco is pretty reliable. If the reliability one is looking for is in the arena of under-performing peripherals. Dating back to the 2009 season, Ricky Nolasco has the fifth-largest disparity between his FIP and ERA of qualified pitchers. Over the last five-plus years, the nearly one-run difference (0.91) between his 4.54 ERA and 3.63 FIP would appear to imply that Nolasco is simply one of those pitchers whose skill set is such that he will more than likely give his squad a lesser version of what his walk- and strikeout-rates would suggest he should be.

Much of this can be tied to his .316 BABIP over the course of these past five-plus years. A quick look at his batted-ball data turns up a logical reason as to why his BABIP remains consistently worse than average and why his ERA is considerably higher than his peripherals would dictate that it should be; his 22.1 LD% is tied for 13th-worst of qualified starters since 2009. To pile on, his 67.7 LOB% ties him for 18th-worst amongst those same pitchers.

It is safe to say that the combination of giving up harder hit balls and stranding too few baserunners is a distasteful one.

While fWAR has been forgiving of Nolasco's warts, crediting him with 15.0 Wins, the RA/9-based rWAR shows that he's been worth just 6.2 Wins. Over time, rWAR gains a stability and likely reflects on-field performance for pitchers more than fWAR does.

That Ricky Nolasco has been this bad, however, has to be a surprise to everyone. His 9.7 K% is the third-lowest in baseball and is less than half of his career 19.0 K%. To say that a pitcher with his obvious and established shortcomings will have issues if his strikeout rates dip to 50% of his his career average is a gross understatement.

While the most likely explanation for Nolasco's sudden inability to strike opposing hitters out is that Kevin Correia is a contagious disease--after all, there has been no discernible dip in velocity for Nolasco from last year to this year--Twins fans can take solace in the fact that it is highly unlikely that Nolasco's .355 BABIP (which hurts a whole hell of a lot more when more balls are being put in play because you're not getting outs via the K) will remain that high. The worst single-season BABIP Nolasco posted before this season was .331 in 2011, and that was .014 points higher than his next-worst season. 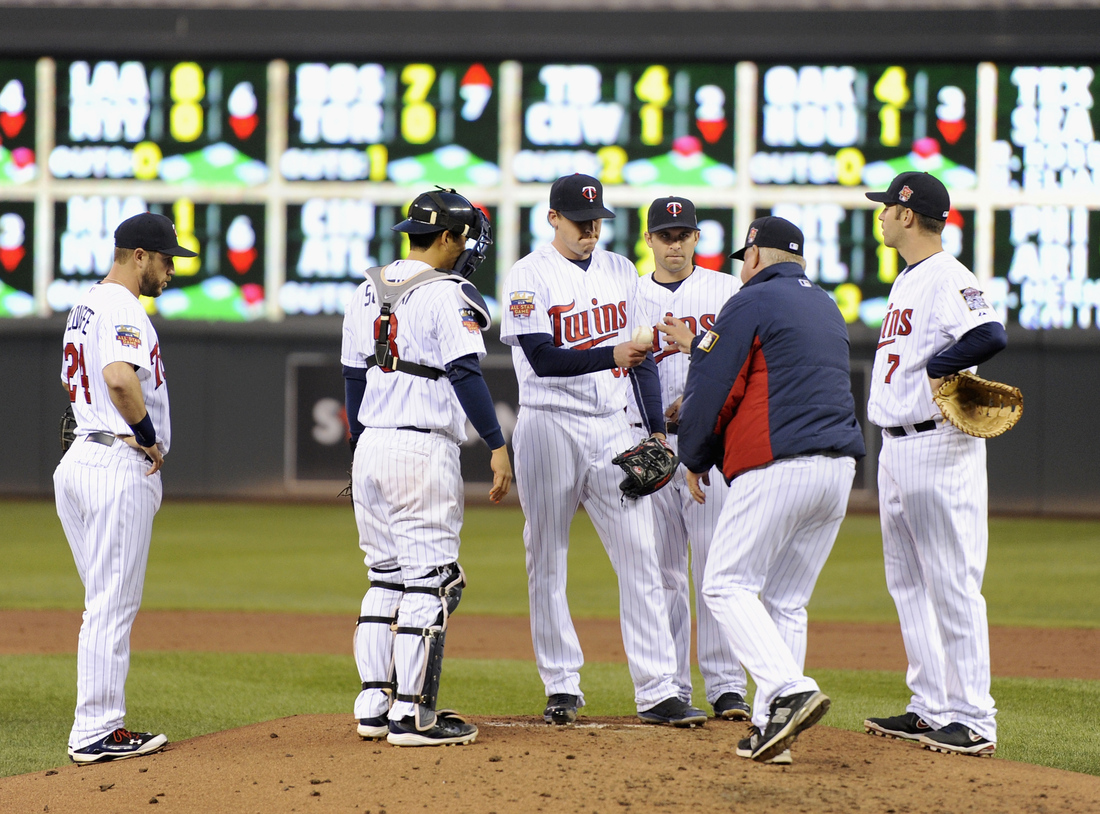 Regardless, for Nolasco to have been worth the money that Terry Ryan handed him when we check back in at the end of this deal, he will have to have become a different pitcher. At 31, it's probably safe to say that's not something for which Twins fans should be spending too much energy hoping. That Nolasco was worth just 6.5 rWAR from 2009 to 2013 indicates that Ryan will be lucky to get about $12MM per WAR over the term of the four-year deal.

But maybe this leopard can change his spots.