Rockies or Astros: Who is winning the Dexter Fowler trade?

A much maligned move from December has a decidedly different outcome through April. Did the Rockies possibly see this coming?

Share All sharing options for: Rockies or Astros: Who is winning the Dexter Fowler trade?

It's hard to imagine Dan O'Dowd being anything less than satisfied with the 16-12 April turned in by the Colorado Rockies thus far.  Despite injuries that have sent 2013 National League batting champion Michael Cuddyer (hamstring), returning staff ace Jhoulys Chacin (shoulder), and top pitching acquisition Brett Anderson (broken finger) to various levels of the DL, the team sits just a half game behind the San Francisco Giants for 1st place in the National League West.

Who is winning the Prince Fielder for Ian Kinsler

Who is winning the Prince Fielder for Ian Kinsler

That kind of early success would be enough to please most any General Manager; that it's sustained thanks in large part to the decision to trade Dexter Fowler to the Houston Astros this offseason lends a little credence to why O'Dowd was kept on for a 15th year despite several recent lackluster seasons.

The December trade that sent Fowler to the Astros in exchange for pitcher Jordan Lyles and outfielder Brandon Barnes was nearly universally praised as a steal for Houston, and at the time, it was easy to see why.  The Astros were picking up an in-prime 27 year old OF who had two years of team control remaining and a career OBP of .363, a trait much desired by the franchise whose .299 OBP in 2013 ranked them 29th out of 30 MLB teams.  In exchange, they gave up Lyles, 23, a former 1st round draft pick whose 5.35 ERA across 377 IP for the Astros had been enough to accumulate -2.8 rWAR in parts of 3 seasons, and Barnes, also 27, who hit .240/.289/.346 in his first full season spent entirely in the big leagues.

It seemed a rather light return for one of the better leadoff hitters in all of baseball.

Considering the statements questioning Fowler's toughness made by O'Dowd prior to the trade, it's possible that there were motives beyond on-field performance behind moving him, and it's also possible that the publicity of those statements did enough to damage Fowler's trade value to the point where the Astros package of Lyles and Barnes was the best offer on the market.  It's also possible, however, that the financial impact of the deal - along with O'Dowd's knowledge of his own roster - made it exactly the trade he wanted to make.

It wasn't just the players acquired from Houston that made the deal work in the eyes of the Rockies' front office, it was for whom the deal opened doors, and as Ken Rosenthal noted for FoxSports.com, the prime beneficiary has been Charlie Blackmon, who leads all of baseball with a .379 batting average entering play today.  While there's no way O'Dowd saw that level of performance coming (and there's no way he would reasonably expect it to continue), he may well have seen a competent enough replacement for Fowler already on his roster who had a similar batting profile, was three months younger, and who was set to make nearly $6.8 million fewer in 2014.  Blackmon was, after all, a former 2nd round draft pick who had hit .309 with an .803 OPS in 258 PA for the Rockies in 2013, and the potential he showed paired with the freed-up payroll was simply too good to pass up. 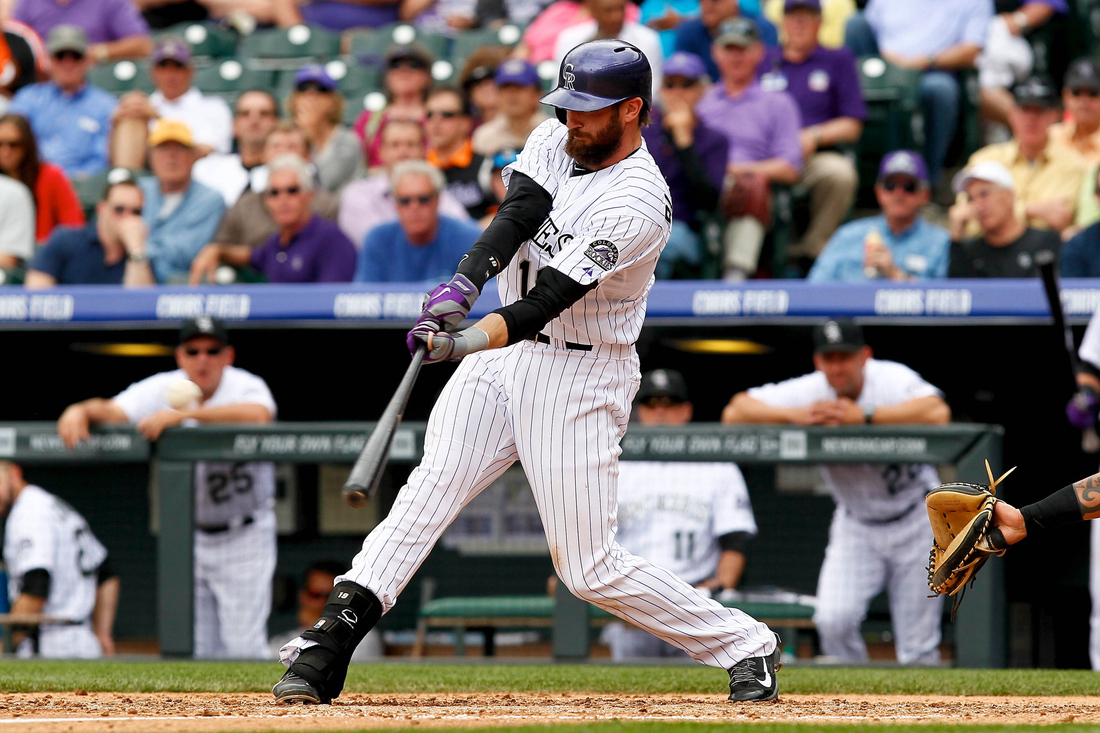 With five months of hindsight and a month's worth of small samples to go on, nearly everything suggests that it's actually the Rockies who have benefited the most from the swap.  Blackmon, as was noted, leads the majors in batting average, and his 1.046 OPS has been the catalyst to the league's best offense; Lyles has lowered his WHIP from 1.51 to 1.11, upped his groundball percentage from 48.4% to 57.6%, is allowing home runs at half the rate he did in 2013, and has managed a sterling 2.93 ERA in his first 30.2 IP with the Rockies; and Barnes, pressed into more regular action than initially planned thanks to Cuddyer's hamstring issues, has responded by hitting .333/.410/.407 in 65 PA.

And the net $6+ million the Rockies saved from the result of those deals?  It was rolled into signing free agent Justin Morneau to a 2 year, $12.5 million contract ten days after their trade with the Astros, and the 2006 American League MVP is off to a .357/.381/.643 start in his first season taking over 1B for the recently retired Todd Helton.

There are, of course, BABIP spikes, inflated Coors Field splits, strength of schedule issues, and the requisite small sample size follies with each of the players involved, but even with those arguments built in, it's hard to discredit the series of moves from the Rockies' perspective.  Their offense got better and deeper, and they picked up a pitcher who has helped carry their staff through the attrition of early season injuries.

Most importantly, though, the Rockies are winning, and despite the painful memories of the 12-4 start to their 2013 gone wrong, the 2014 season is looking up in Denver.