The larger implications of the Yunel Escobar extension

Share All sharing options for: The larger implications of the Yunel Escobar extension

Before Tampanians St. Petersburgers could even turn to look in away from the Chris Archer extension, Andrew Friedman and the Rays front office had extended another productive member of Team Ray. This time it was Yunel Escobar--the same Yunel Escobar who was suspended for three games on account of an anti-gay slur that he penned into his eye black and was dumped off by the Marlins post-fire-sale for the low, low price of Derek Dietrich, who reached the Major League level last year but did so for the Marlins, which at least partially negates the significance of such a feat as his 0.0 fWAR and -0.2 rWAR would substantiate.

The one-time Brave/Blue Jay/Marlin*/Cuban** shortstop has been worth a very respectable 20.7 fWAR and 23.3 rWAR over his seven-year career. Given that he has yet to put up a season in which he was not worth at least 1.5 fWAR or 2.3 rWAR, it would seem that the Rays are highly likely to get surplus value from their investment. ZiPS and Steamer both like Escobar to be worth more than two wins this season (2.5 and 2.3 WAR, respectively), while Oliver is even more bullish, projecting a pair of 3.5 WAR seasons for 2014 and 2015 before dropping to 3.2 and 3.0 WAR in 2016 and 2017, the last years in which the contract gives Tampa control over Escobar.

*Sort of.
**Once and always

While much of Escobar's on-field value is derived from his defense--despite mental lapses that got him benched early in his career in Atlanta, he compiled a 25.0 UZR (4.5 UZR/150) and 50 DRS in seven seasons and 7611.1 innings while never posting a negative value in a season by either measure--Escobar's bat has been a net positive on his career, owning a career line of .278/.350/.386 with a .328 wOBA and 102 wRC+. 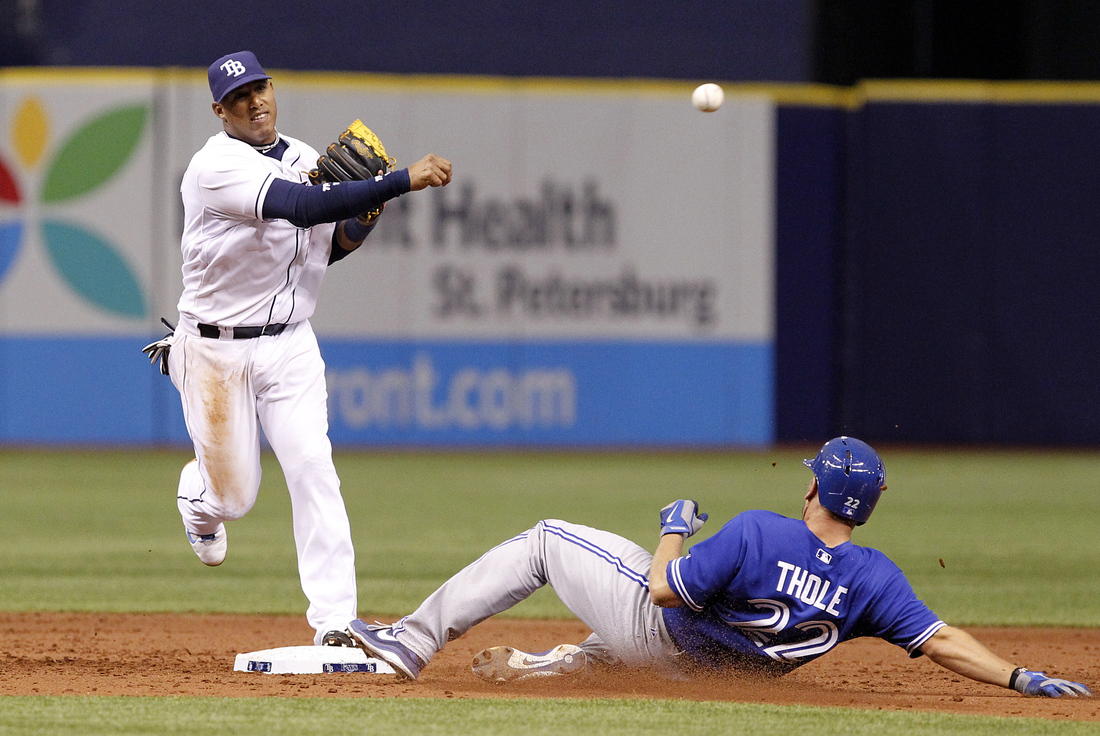 With the ever-escalating cost of the win on the free agent market and the fact that Escobar is giving that production from a spot on the diamond in which such production is in surplus of what should be expected, the Rays really only need to get somewhere in the neighborhood of 1 WAR per year to get their money's worth.

Now as Matt Klaassen touched on here, it may be fair to speculate that Escobar's rocky past may have been a factor in why the Rays found themselves the benefactors of a deal that is not insignificantly below what one would assume his market value is. While it was Escobar who openly courted the Rays on the commencement of extension talks, the fact that Escobar has been dealt for as little a return as he has on three separate occasions could very well have dissuaded him from wading into the potentially icy waters of free agency.

What this move would seem to further indicate, however, is that Andrew Friedman and the extremely cost-conscious Rays will get surplus value wherever they can. In the case of Yunel Escobar (and Manny Ramirez or the allegedly reprehensible Josh Lueke), this has meant that the Rays can and will overlook character issues. When any market inefficiency must be exploited as is the case when your squad is hampered with a bottom-five payroll every season, production in surplus of cost is key. Employing players with character issues that at least theoretically deflate their value on the open market is an agnostic way to go about doing that, and the Rays can reasonably expect to get upwards of 3 WAR in excess of what they will pay Escobar through 2017.

While the stain of ignorance/homophobia is hard to wash away, baseball is a business, and it is difficult to argue with both the track record of Friedman's Rays and the fact that production needs to be maximized at all costs when you are dealing with as puny a budget as the Rays are.