The San Diego Padres suffered through a rash of early and preseason injuries, but they're finally beginning to get healthy.

That the 2014 San Diego Padres sit just 3 games under the .500 mark is somewhat of a minor miracle.

A second Tommy John surgery knocked Cory Luebke from their projected rotation before the season even began, and the same fate ultimately forced Josh Johnson out of the 2014 picture before he ever through a big league pitch for the club.   Two projected starting outfielders hit the DL before the squad could wrap up Spring Training, and star 3B Chase Headley, who the club opted not to trade as he entered his final season of team control, hit the DL on April 25th with a strained right calf.

That rendered the three highest paid players from their club-record $90 million payroll on the DL before the month of April could finish.

As if the injuries hadn't been enough, the production they've seen from their offensive regulars has been atrocious.  Among the four players who have had the most PA on the team, only one has managed an OPS above .527 (SS Everth Cabrera, at .615), and the team's overall OPS of .623 ranks them 30th out of the 30 MLB teams.  Yonder Alonso and his .200/.241/.272 line has contributed heavily to the Padres having the worst OPS in the majors from the 1B spot, and the recently extended Jedd Gyorko has stumbled out of the gate with an even worse .505 OPS at 2B.

Had a stellar bullpen and the solid starting pitching led by Ian Kennedy, Andrew Cashner, and Tyson Ross not allowed a team ERA of just 3.08, the bats may have very well hit the team completely out of the playoff picture before Memorial Day.  As it stands, however, the Padres sit a still manageable 2.5 games out in a crowded NL Wild Card race, and fortunately for Padres fans, their missing pieces are on the mend.

Cameron Maybin rejoined the Padres on April 27th, and he's shown few side effects from the torn biceps suffered in Spring Training while producing an .850 OPS through his first 12 games.  Headley returned to the lineup prior to Saturday's game against the Florida Marlins and has homered and scored three runs in his two games back.  And finally, it appears that Carlos Quentin may be rejoining the team for their series against the Cincinnati Reds following today's off-day, as Aaron Gleeman of NBC Sports notes. 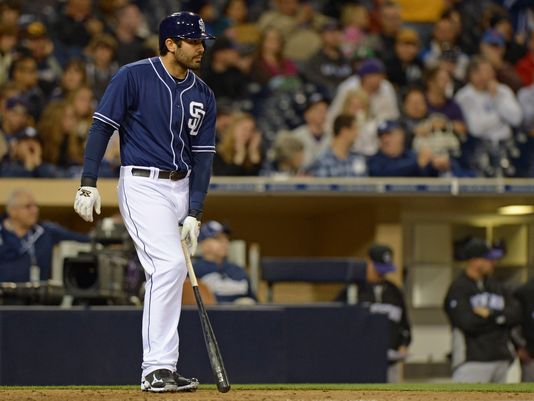 Quentin, who's making $9.5 million in the second year of the 3 year, $27 million contract extension signed midway through the first season after his trade from the Chicago White Sox, should help provide the kind of right handed power needed in a lineup full of players typically more potent from the left side.  He's managed an OPS of .866 during his time in San Diego, but injuries have limited him to 86 and 82 games, respectively, in those two seasons.

Given the struggles of the lineup around him, the Padres will be hoping he can stay healthy for the duration of the 2014 season.  Since veteran outfielders Seth Smith and Chris Denorfia have hit well in his stead, however, that should allow the Padres to ease Quentin back into the lineup.  Considering Quentin hit just .167 in his 7 rehab games at El Paso and Lake Elsinore, that might be the prudent decision, anyway.