Jose Fernandez Injury: Immediate blog reactions from around the web

Miami Marlins phenom Jose Fernandez appears to be done for the season, but what does that mean for the Marlins and for baseball fans around the league?

Share All sharing options for: Jose Fernandez Injury: Immediate blog reactions from around the web

Per Heyman's report, Fernandez visited Neal ElAttrache, a noted physician who has worked with numerous athletes in the past, and was recommended to undergo Tommy John surgery. The Marlins phenom will now consult with team doctor Lee Kaplan to confirm ElAttrache's diagnosis and recommendation.

Jose Fernandez likely out for year with UCL tear

The young phenom's initial diagnosis was the sum of all fears.

Jose Fernandez likely out for year with UCL tear

Though the season-ending procedure has yet to be officially confirmed, it's essentially a foregone conclusion given the presumed extra caution the Marlins will take with their prized right-hander, along with the rash of UCL tears this season.

What exactly does this mean for the Marlins? Fish Stripes' Sam Evans examined a few replacement options for Fernandez, including left-hander Brian Flynn:

Brian Flynn is one of the more logical options for the Marlins. He has some Major League experience, he's considered a solid prospect, and he has pitched will for Triple-A New Orleans this season. However, he's not an exciting young player that would be able to steal any of Fernandez's buzz and he was awful in his four starts for the Marlins in 2013. Flynn is scheduled to make a start today for New Orleans, so it is unlikely that he will get the nod for Wednesday.

Another possibility, per Evans' article, is Marlins first-rounder Andrew Heaney, whose development is certainly in the more premature stages and would ideally spend more time in the minor leagues:

If the Marlins really wanted to shake things up, they'd call up 2012 first round pick Andrew Heaney. Heaney has been outstanding for Double-A Jacksonville this season (one home run, 10 earned runs allowed in 39 innings), and the Marlins have proven before that they aren't afraid to bring up their young arms early. However, Heaney is just starting to get his feet under him at Double-A. Not every pitcher is the same and Heaney definitely shouldn't be treated the same as Fernandez. Furthermore, Heaney will not be ready to be promoted for Fernandez's slotted Wednesday start, as he made his last Double-A start yesterday. Heaney has the chance to make an impact for the Marlins this season, but bringing him up before the All-Star break could be problematic.

Perhaps the most feasible among the options Evans lists is right-hander Kevin Slowey, a veteran who has been around the game for several years with experience primarily in the rotation. Slowey has posted a sub-four ERA just once in his career (3.99 in 2008) and has mostly been used out of the bullpen this season, but his experience makes him the mostly likely candidate to replace Fernandez:

Putting Kevin Slowey into the rotation would make a lot of sense. Slowey started 14 games last season and pitched fairly well, he's pitched fine in the bullpen, and he's a veteran that's out of options. Even though he's the most unappealing choice, Slowey makes the most sense for the Marlins among the team's Major League players. 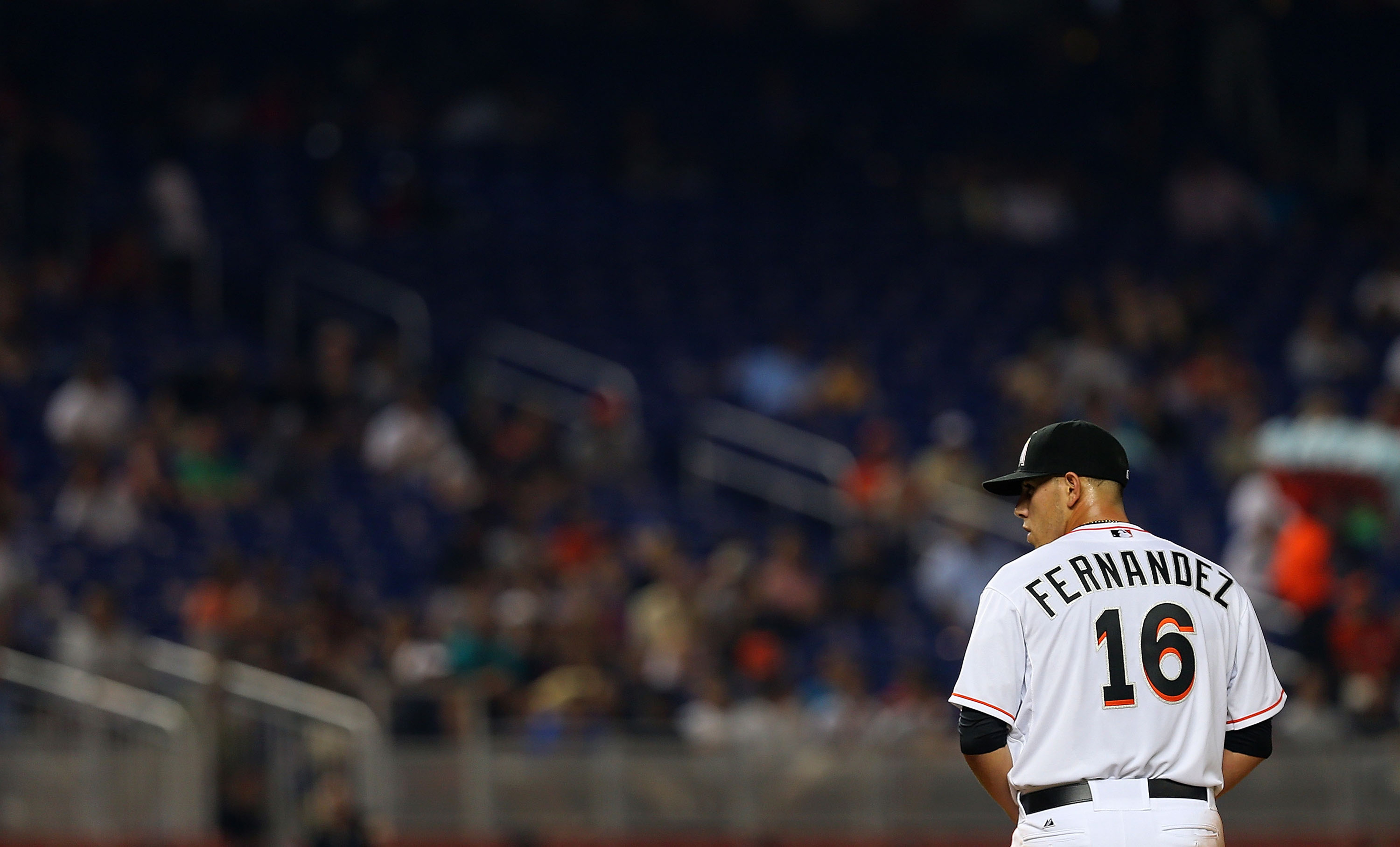 Tom Verducci of Sports Illustrated took a look at the bigger picture, discussing why pitchers are dropping like flies this season, even if their innings are being limited, as was the case with Fernandez last season:

What should be studied is the effect of extreme velocity on a young arm. As the major league average velocity has jumped in the past four years, a similar spike is occurring in the amateur market. The stress of violent pitching, including before pitchers turn pro, is threatening young arms. Think about this: Last September, at the end of a rookie season in which he threw 172⅔ major league innings, Fernandez averaged 97 mph with his fastball. He was just 20 years old. And the sweep, spin and velocity of his slider were like nothing we have seen since Kerry Wood, who also broke down at 21.

"What you have to remember is that every incremental increase in velocity increases the force by multiples," said one MLB medical professional who did not want to be named. "It's like the Richter Scale. And quick jumps in velocity are particularly troublesome. We have a pitcher who can throw 97, but we don't want him to. He's much better off throwing 94.

"So far we've seen an inordinate amount of Tommy John surgeries this year this early. People say 'we're on pace for . . .' but you can't go by that. Will it level off? Will it increase? You don't know the answer. But the scary part is that statistically the month with the most breakdowns has been June. We're not even there yet."

Verducci advocates for a lowering of the mound, something that would put less force on pitchers' arms and thus work to limit the number of long-term injuries like the ones we've seen so often this year.

As Jay Jaffe, Verducci's colleague at Sports Illustrated, wrote on Monday, Fernandez's absence would be detrimental not just to Marlins fans, but to baseball as a whole:

If he does, that’s a crushing blow not only to the Marlins, who after losing 99 games last year are off to a surprisingly solid 20-18 start, but also to the baseball world in general, for Fernandez had shown himself to be one of the game’s brightest young stars, the mound match for the Trouts, Harpers and Machados. Last year, he finished second in the NL with a 2.19 ERA and 9.7 strikeouts per nine in 172 2/3 innings, a performance that not only garnered him NL Rookie of the Year honors but placed him third in the NL Cy Young voting. Prior to Friday, he looked to be an even stronger Cy Young candidate this year, posting a 1.74 ERA while striking out 12.5 per nine. Even after getting roughed up, he still leads the league in strikeouts (70), strikeout rate (12.2 per nine) and FIP (2.14), though his ERA ballooned all the way to 2.44.

There's still the off chance that Fernandez won't need surgery, though fans should certainly prepare themselves for the worst. With so many top young arms going down almost every week, who's next?