The versatile veteran had been on rehab assignment and was under contract through the 2015 season.

Share All sharing options for: Jeff Keppinger Injury: Veteran IF designated for assignment by White Sox

The Chicago White Sox designated veteran infielder Jeff Keppinger for assignment this morning, effectively ending his stint with the team before he could play a single game for them in 2014.  Keppinger was signed by Chicago to a 3 year, $12 million deal in December of 2012 following a season where he hit .325/.367/.439 in 418 PA with the Tampa Bay Rays, but he failed to replicate that success in 2013, hitting just .253/.283/.317 in 451 PA before a shoulder injury ended his season in September.

Keppinger had been on rehab assignment with the Double A Birmingham Barons, where he'd hit .256/.348/.359 with one home run in 47 PA.  He is under contract to earn $4 million in 2014 and $4.5 million in 2015, but since he's 34 years old and coming off a shoulder surgery, it's highly unlikely that the White Sox will find a team who wants him and his contract via trade.

The versatile veteran spent at least 20 games at each of 1B, 2B, and 3B in 2013 and was the team's DH in 16 others, but the White Sox brought in both Jose Abreu and Conor Gillaspie during the offseason to further knock him down the pecking order at the corner infield spots.  The presence of both Adam Dunn and Paul Konerko meant starts at DH would be unavailable, and it appears the White Sox prefer Gordon Beckham's comparable offense and significantly better defense at 2B. 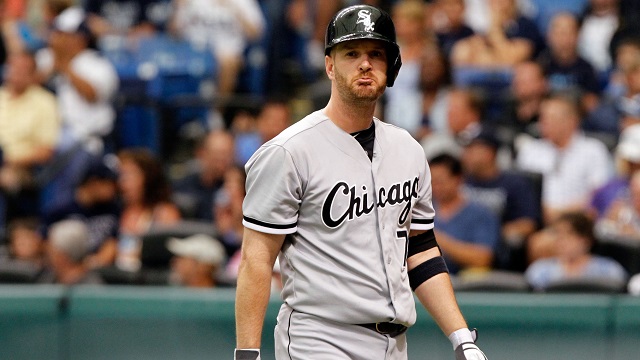 Keppinger has spent time with the New York Mets, Kansas City Royals, Cincinnati Reds, and Houston Astros in his career in addition to the Rays and White Sox, and he's seen time at every position on the field except CF, C, and P.  Ultimate Zone Rating has never valued his defense very highly at most of those positions, however, and it appears that 3B is where he's best suited with his age and diminishing range, but his track record will likely lead to him being signed to a league minimum contract once released by Chicago.  He'll have to prove his shoulder is healthy, of course.