The former NL MVP may be set for a DL stint.

Share All sharing options for: Joey Votto Injury: Reds 1B set for MRI on left knee

The injury news already plaguing the Cincinnati Reds may be getting much worse.

According to FoxSports.com's Ken Rosenthal, Joey Votto did not make the trip with the team for the weekend series against the Philadelphia Phillies, and the Reds 1B is set for an MRI on the same knee that he injured on a slide midway through the 2012 season.

The news comes as yet another blow to a team that has already had ample issues on offense and with injuries.  The Reds averaged fewer than 3.9 runs per game before losing RF Jay Bruce with a knee injury on May 5th, and in the 8 games since his placement on the 15 day DL, they've scored just 2.8 runs per game.  Overall, their 3.67 runs per game ranks them 27th out of 30 MLB teams, and losing Votto's .410 OBP will only make bettering that more difficult.

Making matters worse, there's no true 1B replacement on the roster for the Reds, either.  Neftali Soto has spent much of his minor league career as a 1B, but has just a .200 OPS in 31 PA across two seasons spent mostly on the Reds bench, and his most recent stretches at AAA Louisville haven't exactly inspired confidence, either. 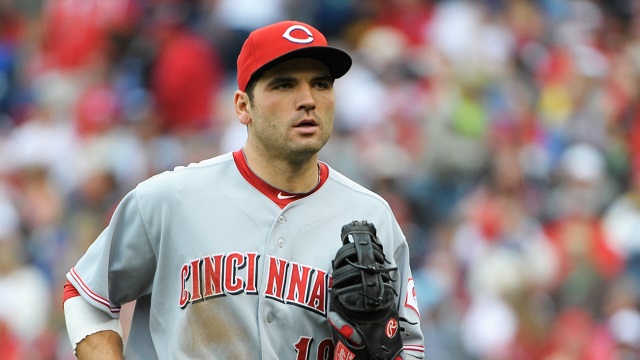 When Votto's injury cost him nearly two months in 2012, Todd Frazier slid across to play some 1B, but that's when the team had Scott Rolen to fill in at 3B; given the offseason shoulder surgery to Jack Hannahan and his current status on the 60 day DL, the only other player on the current 25 man roster who is a capable 3B is Ramon Santiago, but the prospect of his .526 OPS replacing Votto in the everyday lineup seems like far too much of a gamble.  There's a chance that Devin Mesoraco may be recalled as soon as Friday evening, as he's spent the last week on rehab assignment with the AAA Louisville Bats, and the Reds could attempt to use either him or Brayan Pena at 1B for a short period.  However, Pena has played just 4 games in his career at first, and Mesoraco has never played there.

One potential option, however, is to call up 1B/OF Donald Lutz from Cincinnati's Double A affiliate.  Lutz, 25, originally was a 1B before the club opted to shift him full-time to the OF given the presence of Votto (and his 10 year contract extension) on the major league club, and despite a hamstring issue that cost him some time at the beginning of May, his 2014 season has been a stellar one.  Lutz is hitting .360/.412/.685 with 6 HR in 97 PA for the Pensacola Blue Wahoos, is currently on the 40 man roster, and spent 34 games with the Reds in 2013 during Ryan Ludwick's stint on the DL.

Votto, of course, is in the first year of the 10 year, $225 million contract extension he signed at the start of the 2012 season.  While he has not hit with his customary power yet this season, he's still managed a .257/.410/.449 start with 6 HR.  The Reds have already lost Mat Latos, Aroldis Chapman, Jonathan Broxton, Skip Schumaker, Sean Marshall, Devin Mesoraco (twice), Tony Cingrani, Jay Bruce, and Jack Hannahan to DL stints of varying lengths in 2014, and are currently in 3rd place in the NL Central at 18-21, a full 7 games back from the Milwaukee Brewers.

UPDATE: According to Mark Sheldon of MLB.com, the MRI results showed only a quad strain and no structural damage to Votto's knee:

"Yeah, it is a collective sigh of relief, for sure, that it's not anything serious," manager Bryan Price said. "It looks like all the structural stuff in the knee is great and intact. That's the positive thing to this point."

Votto had two operations on the same knee during the 2012 season. The Reds have already put 11 players on the disabled list this season. The club was still deciding a course of action for Votto on Friday afternoon as it began a six-game road trip against the Phillies and the Nationals.

"It means there's a reason for the soreness and the fatigue in the leg," Price said. "We'll collect as an organization after the game today and try to define the best course of either rehab or the best decision for Joey and the club."