The Rockies outfielder is nearing a return from his hamstring injury.

Share All sharing options for: Michael Cuddyer Injury: NL Batting Champ back to Rockies on Tuesday

The Colorado Rockies lead all of Major League Baseball in runs, hits, doubles, home runs, total bases, runs batted in, batting average, on-base percentage, slugging percentage, and - you guessed it - OPS.  At a time when it's hard to fathom their offense being any more potent, it now appears they're on the cusp of adding the reigning National League batting champion to their arsenal, too.

Michael Cuddyer went 0 for 1 with a walk in his first and only appearance with the Triple-A Colorado Springs Sky Sox, and he's set to be activated prior to the Rockies game against the San Francisco Giants in Denver on Tuesday.  The Rockies have the day off on Monday.

Cuddyer was placed on the 15 day DL on April 22nd (retroactive to April 18th) due to a hamstring issue, and while it initially looked like the loss of their starting RF may be a costly one for Colorado, the Rockies ripped off an impressive 17-11 record without him.  The veteran was hitting .317/.373/.533 with 3 HR and 10 RBI through the first 16 games he'd played prior to his injury, and while there's nothing shameful about any of those numbers, the outfield conglomeration cobbled together by the Rockies in his absence has been every bit as effective, if not more so.

Brandon Barnes, a right-handed hitter who was acquired in the offseason from the Houston Astros in the Dexter Fowler trade, has hit .375/.426/.482 as nearly exclusively a RF since Cuddyer had his last at-bat on April 18th.  Drew Stubbs, acquired in December from the Cleveland Indians in exchange for Josh Outman, has been on an even more torrid streak, hitting .394/.423/.621 over the same time period.  Stubbs, a plus defender in CF, has also allowed Charlie Blackmon to shift to RF periodically, which improves Colorado's collective range and defense.  Blackmon, of course, is hitting .339/.376/.570 as the everyday leadoff hitter, and his 2.5 bWAR currently ranks 7th in all of baseball.

In fact, the only outfielder on the Rockies roster who hasn't hit the cover off the ball in Cuddyer's absence has been former All Star, Silver Slugger, Gold Glover winner, and perennial MVP candidate Carlos Gonzalez, who has hit "just" .271/.301/.439 since April 18th.  Gonzalez has been battling a nagging knee issue, however, and the hottest hitting outfielder currently in the dugout has been the one spelling him periodically.  Corey Dickerson has yet to play any RF in Cuddyer's stead, but he's hit .377/.386/.774 in 21 games since April 18th in either LF, CF, or as a pinch hitter. 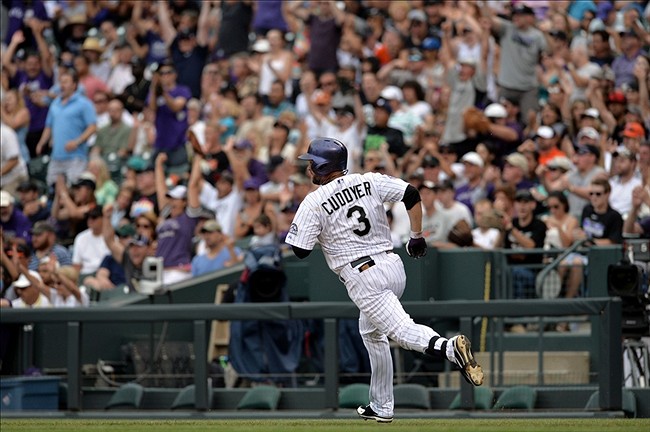 So, the Rockies find themselves in a bit of a pickle, albeit one most teams would welcome facing.  With Cuddyer back in the fold, that's 6 outfielders who have staked substantial claim to playing time, and while the team opened the season with all of them on the 25 man active roster, it will now be a bit tougher to justify sitting three of them on a day to day basis given the hot bats they're swinging.  Dickerson and Barnes are both pre-arb players with options, and Dickerson has spent some time in Triple-A already this season, so there's a chance he could get sent down temporarily.  Also, since Gonzalez's knee tendinitis is a persistent concern, there's a chance the team will use the hot streaks of their other outfielders as a reason to place him on the 15 day DL to give him a break from everyday playing in preparation for a Summer playoff push.

There's also the possibility of the logjam being alleviated via trade, which is certainly something other teams will keep tabs on.  Mark Kiszla of the Denver Post has already begun lobbying for the Rockies to pursue Jeff Samardzija of the Chicago Cubs to give the team a needed starting pitching jolt, and while the Cubs would certainly have their eyes on the Rockies top pitching prospects (Jon Gray and/or Eddie Butler), they'd have some level of interest in a young, cheap OF like Dickerson as a second piece, too.

If the Rockies really wanted to roll the dice, they could even choose to shop Cuddyer after he gets a few healthy games under his belt.  At $10.5 million, the 35 year old's salary is significantly higher than any other outfielder not named Gonzalez, though his playoff experience and reputation in the locker room will likely prevent that scenario barring a complete collapse in the standings.

Regardless of how the Rockies choose to manage their roster glut, they're about to benefit from adding another offensive threat.  At 25-20 and atop the early Wild Card standings, that's not what opposing pitchers wanted to hear.