Winners and Losers: The Blue Jays, the Mets, and an aged knuckleballer

One year and one month into the less talked about Blue Jays trade of the 2012-'13 offseason, who has come out ahead in the deal that sent then-38-year-old knuckleballer R.A. Dickey (and Josh Thole and Mike Nickeas) north of the border for John Buck, Noah Syndergaard, Travis d'Arnaud, and Wuilmer Becerra?

Share All sharing options for: Winners and Losers: The Blue Jays, the Mets, and an aged knuckleballer

While their trade with the Marlins two offseasons ago made the most noise, the Blue Jays deal netting them R.A. Dickey reigning NL Cy Young Award winner from the Mets is just as interesting.

With club control of Dickey running out and GM Sandy Alderson not wanting to commit multiple years to extend their unique ace past the 2013 season, the Mets did what any smart team in the midst of a rebuild should do. They found a trade partner that would pay for their star pitcher with the most valuable currency there is to a team with its eyes on the future: high-upside prospects.

So the Mets shipped off Dickey along with back-up catcher Mike Nickeas and slightly more useful back-up catcher Josh Thole--who has had the unenviable job of catching Dickey since 2010. For his part, Alex Anthopoulos quickly signed Dickey to the extension that he wanted, adding two years at $12MM a pop to the $12MM he was set to make in 2013 and a club option for at third year at the same price with a $1MM buyout, guaranteeing Dickey an extra $25MM.

In return, the Mets got two catchers--albeit two catchers with much more upside than Mike Nickeas and Josh Thole--John Buck and Travis d'Arnaud, along with the giant righty hurler Noah Syndergaard and RAW Venezuelan minor league rightfielder Wuilmer Becerra.

On the Blue Jays side of the equation, R.A. Dickey was worth 2.0 rWAR and 2.0 fWAR last season. He saw his K% dip from 24.8% to 18.8%--a significant drop--and his BB% rise from 5.8% to 7.5%. This meant his K/BB dropped from an aberrant career-high of 4.26 in his Cy Young season to 2.49, which is pretty much exactly what it had been in the two seasons leading up to his miraculous [read: unsustainable] 2012 campaign. To add to his woes, his GB% dropped to its lowest mark as a full-timer in a decade, while his increased FB% coincided with a spike in HR/FB% that was eerily similar to the numbers he put up early in his career in Texas.

Dickey's struggles meant that the Jays found themselves paying above-market costs for the 2.0 WAR he gave them, as his performance was about $9.9MM last season.

Thus far this season, Dickey has an ERA on the wrong side of five (5.09), while his 4.32 FIP is actually lower than his 4.58 mark last season. His K% is up modestly (19.1%), but his BB% has spike alarmingly, settling in at 11.5% through five starts. Obviously the season is still early, so it's far too early to make much of Dickey's 2014 performance. Both ZiPS and Steamer like Dickey to finish right around 2.0 WAR, so given the market inflation this past year, the Jays could actually get their money's worth.

Josh Thole, the other player to have gotten anything resembling playing time for Toronto, has been worth -0.3 rWAR and -0.2 fWAR.

The story for the Mets is still largely to be written. Before he was flipped to the Pirates along with Marlon Byrd for Dilson Herrera and Vic Black at the waiver trade deadline, Buck was worth 0.4 rWAR and 1.6 fWAR. Buck started just six games down the stretch for the Pirates, so one can probably assume that the Marlon Byrd was the key to the deal for the Pirates. Still, Buck will continue to give the Mets value in the deal until Herrera and Black run their way through the org.

Despite raking in the high minors, the twice-traded über-prospect Travis d'Arnaud has yet to make an impact in the Majors. Still, he is just 52 games into his Major League career, and he cracked the top 25 on Baseball Prospectus and Baseball America's prospect lists. There is a lot of upside with d'Arnaud, but right now he has been worth -0.5 rWAR and 0.1 fWAR. ZiPS projects d'Arnaud to be worth 1.5 fWAR this season, while Steamer has him at a cool 2.0 fWAR. 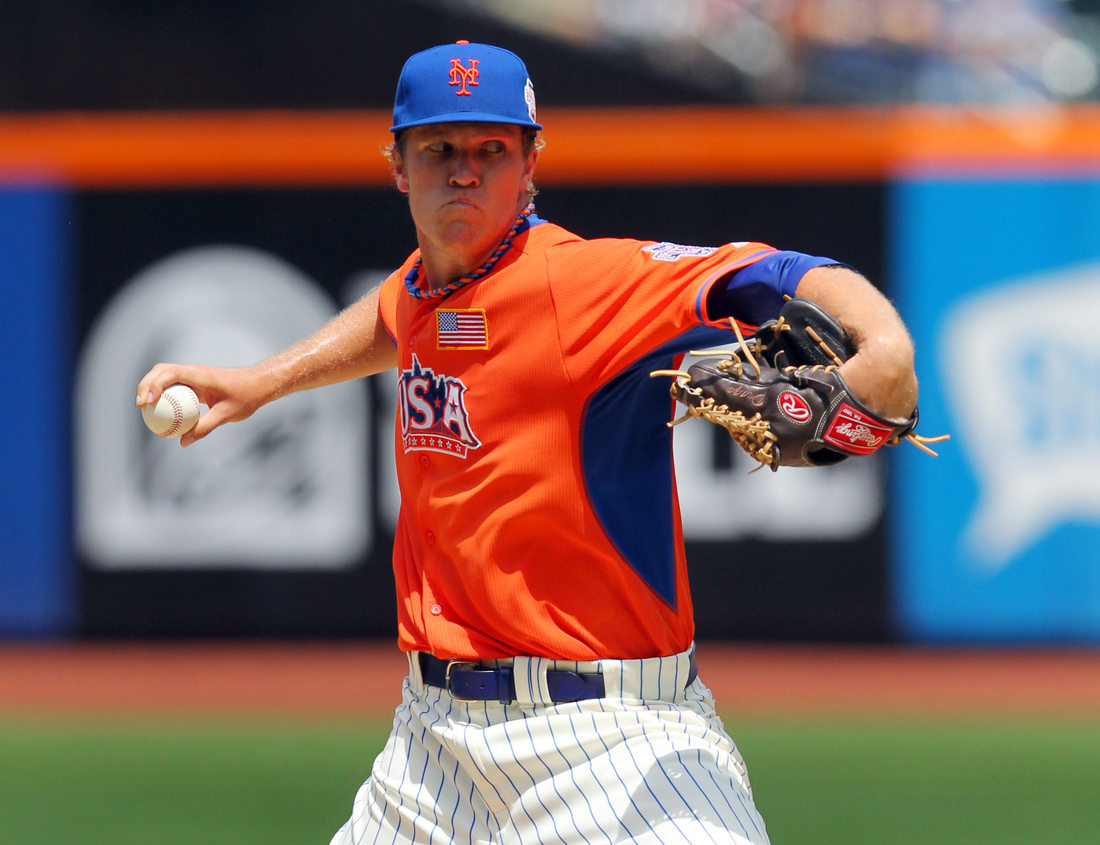 While d'Arnaud was considered the key "get" in the deal for the Mets--and what catcher with his bat wouldn't be?--6'6" flamethrower Noah Syndergaard has established himself as a consensus top 20 prospect. On the verge of getting his first Major League experience, Syndergaard was a chic pick for NL Rookie of the Year this season. Just needing a little refinement on his change-up to go with his 80-grade fastball and plus curve (with the potential to be a 70-grade offering). Any struggles one might perceive him as enduring can likely be chalked up to pitching in one of the most aggressively unfriendly settings for pitchers in the minors, Las Vegas.

As for the prospect to dream on, Wuilmer Becerra, he is very raw, but he's always been about two years younger than the average player in his league. He is a lottery ticket, but it's conceivable (though unlikely) that he could turn into something.

Even if d'Arnaud completely flames out, it's hard to imagine a scenario in which Syndergaard isn't worth significantly more than Dickey over the course of Dickey's three and possibly four years. Of course, the Mets really just gave up one year of Dickey with the right to negotiate an extension with Dickey, thus avoiding having to contend with other suitors. Still, the value of this in the scope of what the Mets gave up is hard to quantify, and the fact is: Alderson was not going to extend Dickey.

Given that fact, it's hard to see how this trade plays out in the Jays' favor.

It's premature to make such pronouncements; but given the fact that Dickey is unlikely to be worth the money the Blue Jays will be paying him and that the Mets will have nearly seven years of Syndergaard alone, to make no mention of John Buck and Travis d'Arnaud, it seems like this is a clear win for Alderson and the Mets.