The Cincinnati Reds closer took the first big step towards returning to the majors with a rehab start in Dayton.

Six weeks and one day removed from being hit in the face by a line drive in a Cactus League game against the Kansas City Royals, Aroldis Chapman took the mound for the Class A Dayton Dragons for the first rehab appearance on his road back to rejoining the Cincinnati Reds.

More on the Reds

Billy Hamilton for Rookie of the Year?

With a head start -- that he probably didn't need -- Hamilton might be tough to catch, but advanced hitters like Gregory Polanco and Javier Baez could end up posting much better numbers.

More on the Reds

Billy Hamilton for Rookie of the Year?

The two-time All Star closer - who had a titanium plate inserted above his left eye to help stabilize the facial fractures caused by the impact - had thrown live batting practice to several of his Reds teammates, but his outing against the Lansing Lugnuts on Thursday night was the first time he's hummed an in-game fastball since throwing the pitch that - when turned around by Salvador Perez -landed him in the Banner Del E. Webb Medical Center on the night of March 19.

The 99 mph registered by Chapman's very first pitch indicated that his arm is ready to return, and if the comments he made following his one inning performance are any indication, he's carrying no residual fear of a similar incident occurring again, either.  As C. Trent Rosecrans noted in a post-game article for USA Today Sports, Chapman said (through interpreter Tomas Vera), "I'm really positive about this.  I feel really normal, I have confidence in myself, I don't have any fear or anything."

Given the dire scene at Surprise Stadium immediately after he was hit and the gruesome post-surgery photos leaked by Chapman himself, the turnaround the 26 year old has made in such a quick fashion, both physically and mentally, has been remarkable. 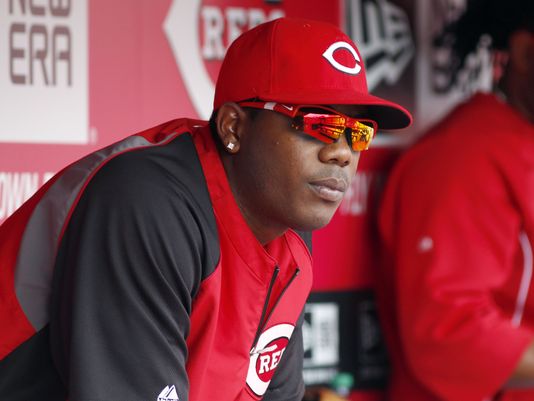 Chapman, of course, was extremely fortunate that the injuries sustained were no worse, and Cincinnati's initial decision to place him on the 15-day DL rather than the 60-day DL now seems prescient.  Both the Reds and Chapman seem to think he'll be ready to be recalled after another 3 or 4 rehab outings, which means he could be back in the big leagues in roughly one week.

That should come as welcome news to Reds fans, as it's no secret that their bullpen has suffered mightily without him.

Not only has Chapman been sidelined through the first month of the season, but the bullpen that had the best ERA in the majors as recently as 2012 has also been without Jonathan Broxton, Sean Marshall, and Alfredo Simon for various stints and reasons, and the arms tasked with pitching in their stead simply haven't been able to have any similar results.  The 4.74 ERA currently sported by the collective Reds bullpen ranks as the second worst in the NL (ahead of only the Philadelphia Phillies), and while the spotty showing from the team's offense has undoubtedly also been a factor, the lack of success by the relievers is a huge reason why the Reds, at 4-9, have the worst record in 1-run games among all 15 teams in the National League.

Broxton's return some 10 days into the season gave the Reds' bullpen some much needed stability, and manager Bryan Price has since used him primarily in Chapman's vacated closer role to great success.  Broxton is a perfect 5 for 5 in save opportunities, he's striking out a batter an inning, and he's yet to allow a run in 2014, and the return of fellow veteran Marshall has also helped push less experienced (and less productive) guys like Nick Christiani and Logan Ondrusek further down the pecking order.  Their returns have given a glimmer of predictability and expectation to a bullpen that was in complete flux to begin the season, and J.J. Hoover - who had a 26.1 scoreless inning streak as part of a breakout 2013 campaign - has also begun to shave runs off a bloated early season ERA.

The Reds will need more than Chapman to make up the 6.5 games currently between them and the NL Central-leading Milwaukee Brewers, but adding the man whose 15.56 K/9 across the 2012-2013 seasons led all relievers in baseball would certainly be a good start.  The perfect, 2 strikeout inning he threw in Dayton last night suggests that may be right around the corner.