The former Cy Young Award winner was placed on the DL with an arm issue for the first time in his career.

The Philadelphia Phillies placed ace LHP Cliff Lee on the 15 day DL late Tuesday and have recalled 1B/OF Darin Ruf from Triple-A Lehigh Valley to replace Lee on the 25-man roster.  Lee had been experiencing soreness in his left elbow for some three weeks, as GM Ruben Amaro told CSN Philly's Jim Salisbury, and after an MRI revealed a strain in his pitching elbow, the team decided to shut him down for the time being.

The injury is an obvious blow to the Phillies, who sit in 4th place in the National League East at 20-22.  Amaro made it no secret that he intended for the team to contend in 2014 despite a mostly aging roster, adding 37 year old A.J. Burnett & 36 year old Marlon Byrd in free agency along with bringing back 35 year old catcher Carlos Ruiz on a 3-year contract.  Losing Lee, however, removes the most consistent piece from a rotation that has already had its share of issues in 2014, and the team that has already seen an NL-low 256 innings from their starting rotation will have to scramble to replace him.  While they haven't determined who will take Lee's spot in the rotation, it appears that David Buchanan is the most likely choice. 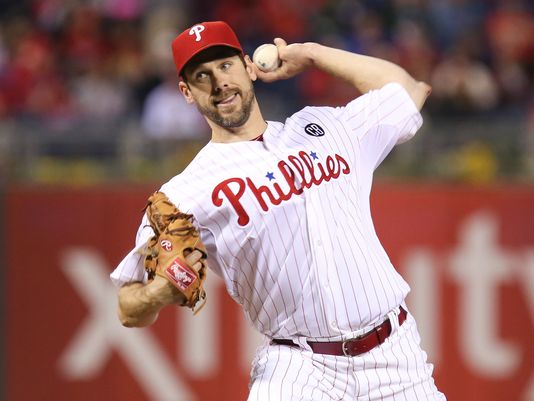 Doling out 5 year, $120 million contracts to pitchers who turn 33 years old in the first year of the deal isn't exactly a commonplace practice in Major League Baseball.  When the Phillies and Lee agreed on that very contract prior to the 2011 season, however, few people doubted the 2008 AL Cy Young Award winner's ability to live up to his end.  Through the first three seasons of the contract, Lee was every bit as dominant and durable as the Phillies could have hoped.  He logged 666.1 innings of 1.04 WHIP, 6.54 K/BB dominance, compiling a 37-25 record, 2.80 ERA, ERA+ of 139, two All Star appearances, and two top-6 finishes in the Cy Young voting, all good enough to accumulate 20.4 bWAR and satisfaction from ownership.

Despite Lee's excellence, the Phillies managed just an 81-81 3rd place season in 2012 and a dismal 73-89 4th place season a year ago, and though numerous trade overtures were presented to Philadelphia during that time, the team remained adamant that Lee would not be traded.  The Phillies now face the prospect of their biggest trade piece's injury actually pushing them closer to trading him, as his absence may lead to the Phillies falling even farther out of the 2014 playoff race.

Lee is under contract for one more season at $25 million, and he's got a vesting option for another $25 million in 2016 should he either a) throw 200 innings in 2015 or b) throw 400 innings combined between 2014 and 2015, though there is a team option of a $12.5 million buyout should that option vest.  In essence, Lee has a guaranteed $37.5 million left on his contract, and the player once viewed as a durable workhorse now appears as a pitcher on the DL with elbow issues who turns 36 in months and will be owed some $50 million if traded at July's trade deadline.  That's a tough pill to swallow for any potential acquiring team, and it may mean that the Phillies' window to shop Lee with the upper hand may have gone by the wayside.