The former ace of the Minnesota Twins and New York Mets is inching closer to being healthy again.

Johan Santana hasn't thrown a pitch in a Major League game since August 17, 2012, but it appears the recovery from his second major shoulder surgery is progressing well enough to potentially give the 35 year-old another chance with the Baltimore Orioles later this year.

As Brittany Ghiroli noted for Orioles.com, Santana threw 4 innings in an extended Spring Training game, and reportedly flashed the best velocity he's shown since the April 2013 surgery he had to repair the torn capsule in his left shoulder.  Though manager Buck Showalter declined to give an exact mph hit on the radar gun by Santana's fastball, it surely has to be topping out much higher than the 81 mph he hit in his late February showcase.  Santana signed with the Orioles a week after said showcase, agreeing to a one year minor league deal that allowed him to earn up to $8 million should he make the 40 man roster and hit certain performance bonuses. 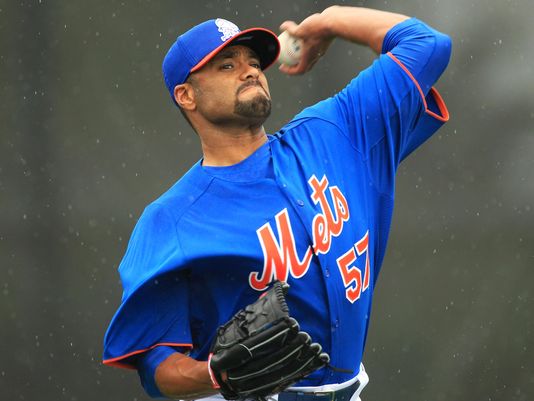 There's no telling exactly what the two time American League Cy Young Award winner still has in the tank, and there's no certainly no guarantee that his surgically repaired shoulder will hold up, but with the rash of injuries plaguing pitchers across both leagues this season, gaining that kind of established depth for a late-season push would be a boon to any franchise.  Santana has thrown just 117 innings in the majors since the end of 2010, a season that saw him throw 199 innings with a 2.98 ERA, 1.17 WHIP, and an ERA+ of 131 for the New York Mets.

While the collective 4.28 ERA provided by Baltimore's starting pitchers hasn't exactly been the kind of success they had hoped for in 2014, the Orioles have at least dodged the major pitcher-injury bug so far.  Aside from Kevin Gausman's lone start, the Orioles' five primary starting pitchers have combined to make the team's other 44 starts.  As nearly every general manager in baseball would tell you, however, pitchers are a fickle group, and there are very few franchises that can boast having an arm with six Top 10 Cy Young finishes to his name as an insurance policy.

As Ghiroli mentioned, the typical rehab assignment for pitchers can last up to 30 days, and Santana will likely need another start in extending Spring Training before heading out on one.  With a pitcher who has fought injuries as often as Santana, Baltimore will surely be cautious with him, and expecting him to be fully ready around the All Star break in early July is a pretty conservative timeline.

Santana is in pretty star-studded company in Sarasota these days, too, as Dylan Bundy has also resumed throwing in extended Spring Training games.  Bundy, considered a consensus Top 10 prospect prior to the 2013 season, had Tommy John surgery in late June of last year, and according to Dan Connolly of the Baltimore Sun, Bundy tossed his first inning against opposing hitters on May 20th.  Like Santana, Bundy hasn't thrown a pitch in an actual game since late 2012, and while the 21 year-old isn't in the big league plans for the Orioles this season, his return is vital for the future of the franchise's rotation.

The Orioles have seen Manny Machado and Chris Davis return from DL stints recently, and it now appears their pitching depth is getting healthier, too.  That's all good news as the 23-22 club looks to get back to the playoffs after an absence in 2013.