Atlanta has decided to make a move to upgrade their paltry 2B performance.

It appears that the Atlanta Braves are finally making a move to improve their 2B production, according to Mark Bowman of MLB.com.

The #Braves have promoted Tommy La Stella to the Majors. A corresponding move has not been announced.

Tommy La Stella is expected to join the Braves for tonight's game against the Boston Red Sox, and while Bowman mentions that Dan Uggla is likely to remain with the team, La Stella is probably in line to receive the bulk of the playing time at 2B in the near future.  Since the Braves play their next two games in Boston, they'll have the DH spot at their disposal for the immediate future, as well.

La Stella is the rare hitter who walks more than he strikes out, and while he's not shown as much power in his bat in 2014 as he had in previous seasons, he's still managed to get on base at a premium rate while showing the contact ability that has established his prospect status.  He's hit .293/.384/.359 in 198 PA in his first foray against Triple-A pitching, and in 1196 minor league PA since being drafted in the 8th round out of Coastal Carolina University in 2011 he's hit .322/.407/.474 with 136 walks against just 102 strikeouts.  Prior to the season, he was listed as the organization's 13th best prospect by MLB.com.

The Braves will hope La Stella's ability to put the ball in play and manage the strike zone will help balance a lineup whose 439 strikeouts rank as the 5th most in all of baseball.  More specifically, they'll hope his offense can help improve what they've lacked from their 2Bs this year, as the .503 OPS they've produced so far in 2014 ranks as the 2nd worst in baseball, just .001 above what the San Diego Padres can boast. 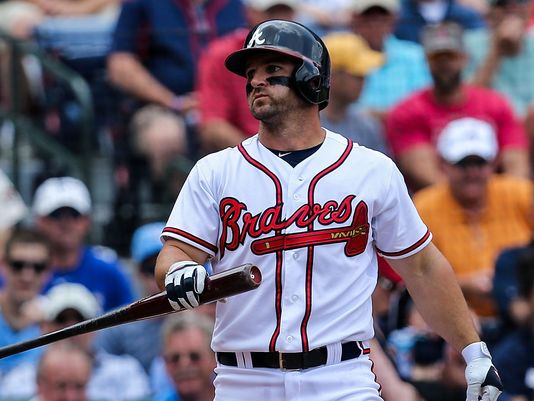 That production has been due in large part to Dan Uggla's struggles, as the veteran 2B has hit just .177/.254/.257 in 126 PA this season.  Uggla is in the fourth year of the 5 year, $62 million contract he signed prior to the 2011 season, and the 34 year old has seen the elite hitting of his previous days as a Florida Marlin wither away rapidly.  He's hit just .211/.319/.394 in 1965 PA since joining the Braves, and since he's never been a good defender, he's finally become enough of a liability to hit the bench despite the roughly $20 million left on his contract.

The Braves optioned IF Tyler Pastornicky to Gwinnett to open a spot on the 25-man roster for La Stella, but since La Stella is not currently on the 40-man roster, a spot will have to be opened for him.