Early Returns: Joe Mauer at 1B

The former catcher and AL MVP is in his first season as the Twins primary 1B, and the choice to move him has paid off.

Share All sharing options for: Early Returns: Joe Mauer at 1B

On November 11, 2013, the Minnesota Twins announced that after 10 seasons and 920 games spent behind the plate for them, Joe Mauer would no longer be their catcher.  Following an injury-plagued 2013 season that saw him miss the team's final 39 games due to lingering concussion issues, the Twins decided that Mauer would officially take over the duties as the team's first baseman beginning in 2014, choosing that it was best for the success of the team and the health of their prized asset if he was moved to a position where it was easier to stay on the field.

The decision, by all accounts, was the correct one.  After the 2009 season that saw him have more walks than strikeouts, hit .365/.444/.587 with 28 HR, 96 RBI, and win the American League MVP, Mauer signed the largest contract in team history (and the largest ever given to a catcher).  His 2010 season was a solid follow-up to his MVP campaign, but knee and concussion issues deemed as direct byproducts to the rigors of catching limited him to playing in just over 70% of the Twins' games from 2011-2013.  With 5 years and $115 million remaining on his contract entering the 2014 season, keeping the team's best player healthy and in the lineup had become enough of a rarity to necessitate a change. 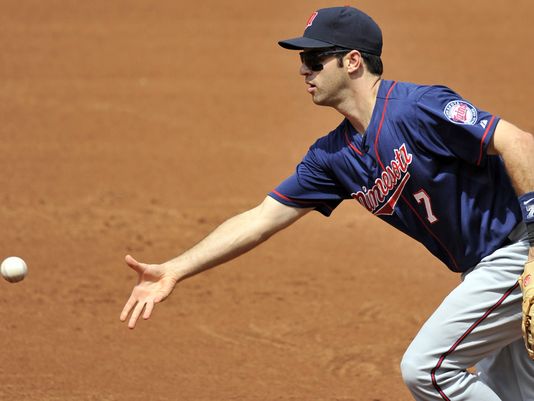 While the bulk of Mauer's playing time had always been behind the plate, he had managed to pick up some starts at 1B since first playing there in 2011, coincidentally getting starts as his friend and former teammate Justin Morneau struggled with concussion issues, too.  Mauer's athleticism and coordination had never been a problem, either, and while small sample size issues cloud most every significant defensive metric, they indicated that his ability to defend at 1B was good enough to make a full-time transition a feasible one.

Judging by the most important criteria available at the time, the decision was prudent, and early returns from the 2014 season suggest so as well.  Mauer has played in all 28 of the Twins games in 2014, he's hitting nearly .300 (.298), getting on base near his career average of .405 (.396), and while his slugging percentage sits at just .377, his .419 career mark in April is far lower than his average in every other month, suggesting that the slow start in the power department is not out of character.

Complementing the Mauer decision was the one made by the Twins to sign then free agent Kurt Suzuki to a one year, $2.75 million contract for the 2014 season, and it would be hard for anyone to fill Mauer's shoes as well as the former Oakland Athletics catcher.  Suzuki, a career .254/.311/.376 hitter, is off to a .297/.375/.405 start through 89 plate appearances, and the 30 year old backstop has walked 10 times in 2014 against just 7 strikeouts.  His current 119 OPS+ would rank as the best season of his career, by far, and his hot start has allowed the Twins to ease catching prospect Josmil Pinto's bat into their squad as their DH without having to turn over the full catching duties to him, yet.

The Twins sit two games under .500 at just 13-15, but their offense is averaging over 5 runs per game for the first time since Mauer's MVP season of 2009.  While the Twins primary 1B of the previous decade, Justin Morneau, has resurrected his career with the Colorado Rockies in impressive fashion following his departure from Minnesota last fall, the series of moves made by GM Terry Ryan, Ron Gardenhire, and the rest of the Twins' brain trust seem to have paid off so far.