The second year players in the National League have emerged as much more than just complementary pieces.

The group of rookies that broke into the National League in 2013 matched their bountiful hype and fanfare with seasons that stood up with the best veterans in the game.  While the American League's 2013 Rookie of the Year, Wil Myers, had a solid half-season in which he totaled 1.9 rWAR in just 88 games, there were six NL first-year players who were worth at least 3.3 rWAR, and many of them blew through April of 2014 in the same manner in which they did the year before.

Reigning NL Rookie of the year Jose Fernandez was only 20 at the time of his first start in 2013, yet he put together a season may very well have earned him a Cy Young award in a non-Kershaw world.  He went 12-6 with a 2.19 ERA, 0.98 WHIP, a K/9 of 9.7, and he led all of baseball by allowing just 5.8 H/9 over his 172.2 inning season.  Remarkably, the now 21 year old hasn't just refined his repertoire, he has actually managed to improve nearly every major aspect of his game through the first month of 2014.  He's striking out nearly three more batters per 9 innings pitched, he's lowered his already miniscule WHIP to 0.90, his K/BB sits at an improved 5.45, and the Florida Marlins ace is leading MLB in strikeouts (65) and FIP (1.67).

Last year's runner-up in the NL Rookie of the Year voting, Yasiel Puig, has also continued to put up star-caliber offensive numbers during his second campaign.  The 23 year old outfield dynamo of the Los Angeles Dodgers came up with a reputation for being both reckless and relentless, and while his 2013 did nothing to dampen that image, the eye-popping numbers he left in its wake were every bit representative of the talent he possesses.  Puig .319/.391/.534 with 19 HR in 432 PA in 2013, and he, too, has picked up where he left off through the first month of 2014.  He sits at .309/.397/.500 with 4 HR through 28 games, and as Tyler Drenon noted, he's still playing with every bit of the fearlessness he displayed in his first year in the spotlight. 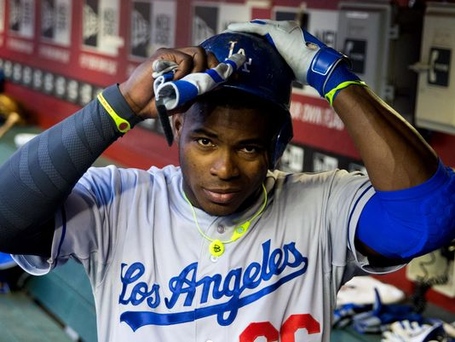 The depth of the National League sophomore class is showing, too, as the list of hitters currently having successful starts to their second years who couldn't even garner 10% of the 2013 Rookie of the Year vote consists of players any franchise would consider a building block.  Former 1st round draft picks Anthony Rendon and Christian Yelich have become cogs for the Washington Nationals and Florida Marlins, respectively, with Rendon's .822 OPS helping ease the loss of Ryan Zimmerman and Yelich's 3 triples the most in baseball.  Nolan Arenado, a Gold Glove winner in his rookie season, may already be the best defensive 3B in baseball, and he's paired that prowess with a .311 batting average and a 24 game hit streak early in his second year.  Even Evan Gattis, whose journey to and from baseball reads more like a Kerouac novel than a prospect report, has his OPS over .800 with 7 HR to his name in 2014.

Not to be outdone, many of the top pitchers have also managed to replicate their initial successes.  Shelby Miller finished 3rd in 2013's voting, and while he has struggled with home runs and command, he still escaped April with a 3.15 ERA.  Julio Teheran, perennially near the top of prospect lists before finally cracking the big leagues full time in 2013, has emerged as the best arm on an Atlanta Braves pitching staff that was historically good through the first month of the season.  The disabled list currently has a pair of LHP in its grips in Hyun-Jin Ryu and Tony Cingrani, but both second year hurlers had similar starts in April as they'd shown in their first year in the league.

The 2013 NL rookie class may produce no eventual members of baseball's Hall of Fame, and injuries or league-adaptation may eventually render each of them as no more than regulars, but their sustained achievements have so far stamped their presence as an official youth movement in the Senior circuit.  Teheran and fellow second-year player Jedd Gyorko have already signed extensions with just one full season to their name, and if this class keeps things going, they'll likely have a few well compensated classmates.