Jay Bruce: What his surgery means for the Reds

The Reds outfielder will miss up to a month after undergoing knee surgery. What exactly does that mean for Cincinnati? (Hint: It's not good.)

Share All sharing options for: Jay Bruce: What his surgery means for the Reds

Talk about rubbing salt in a wound.

In this case, the idiom applies to the Cincinnati Reds, who were already struggling to keep pace in the crowded NL Central before losing starter Tony Cingrani and, more recently, right fielder Jay Bruce, as reported by ESPN's Jerry Crasnick.

Cingrani's injury appears to be of the minor variety, with his ailment being described as "shoulder tendinitis," which essentially means he's too sore to throw at 100 percent. That's far from the case with Bruce, however, as the Reds right fielder is set to miss three to four weeks with surgery to repair a partially torn meniscus in his left knee.

The second year players in the National League have emerged as much more than just complementary pieces.

What does this mean for the Reds? For one, even when Bruce returns, it's anyone's guess as to how he'll perform. He's already struggling this season (.715 OPS, 3 HR), and it typically takes time for a player to get back in the swing of things after an extended absence. As KC Gardner of Red Reporter writes, another well-known Reds hitter wasn't himself after a lengthy injury:

...even if he makes it back in that timeframe, there's no guarantee he will be the real Jay Bruce upon his return.  It took Joey Votto a year to start resembling himself again, and there is some debate as to whether he is still suffering some residual effects a year and a half on.

Even if Bruce comes back and returns to his old self, the blow that Cincinnati will suffer during his absence is especially big for a team that's already struggling to put runs across the board. Bruce's presumed replacement, Chris Heisey, doesn't inspire tons of confidence given his .273 OBP last season and a slow start to the 2014 season, though Bruce wasn't exactly tearing the cover off the ball before his injury either.

Another option for manager Bryan Price would be to use utilityman Skip Schumaker, who was activated off the disabled list on Saturday. The Reds signed Schumaker specifically for this purpose–or rather, to bolster their bench, not necessarily to fill in for an injured star player–and he'll be thrust into action right off the bat, especially if Heisey struggles.

Most realistically, the Reds will use a trio of players interchangeably to fill in for Bruce, as they'll also call up Roger Bernadina when Bruce officially gets placed on the disabled list, according to the Cincinnati Inquirer's C. Trent Rosecrans.

At the very least, the competition created between Heisey, Schumaker and Bernadina could force someone to stand out and actually provide some value out in right field, something the Reds have been missing thus far in the season. That could be the lone silver lining in this unfortunate turn of events for the Reds, who are also coping with the absence of Billy Hamilton. The rookie center fielder's last at-bat came on April 30, though like Bruce, he too has had a tough time getting it going this season. 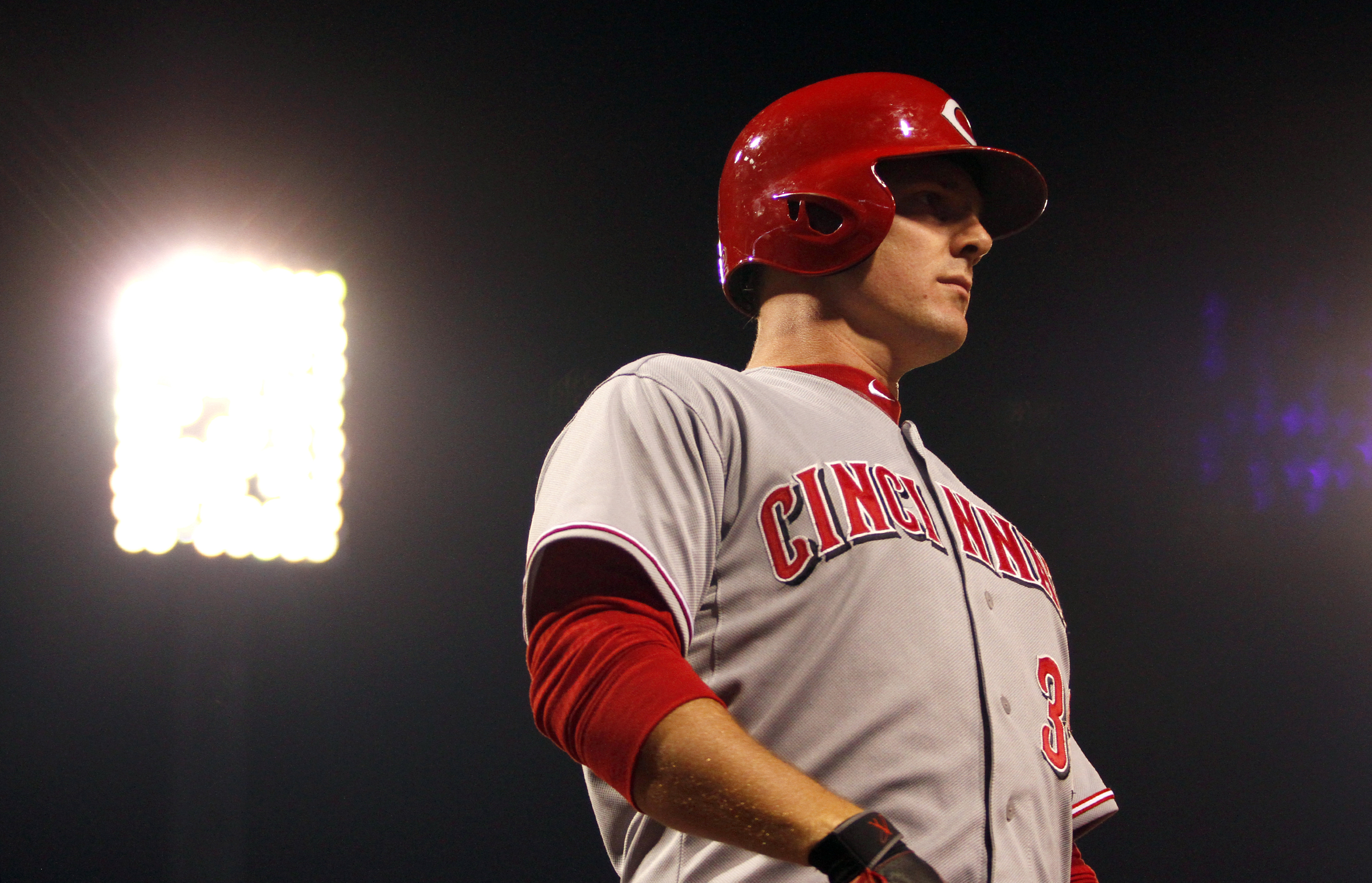 Though there are a host of candidates to fill in for Bruce while he's out, the question remains as to who will supply the power for the Reds, who currently rank a respectable–yet unimpressive–17th in slugging percentage in the majors. The trio replacing Bruce has combined for 95 home runs in 5,161 career at-bats, which doesn't inspire much confidence.

Puig collided with the outfield wall in Miami on Sunday.

One potential positive of Bruce's situation, in addition to the forced competition between Heisey, Schumaker and Bernadina, is that the time off could do Bruce some good, if general manager Walt Jocketty is correct in his theory that the injury was plaguing Bruce all along, per Rosecrans' article:

Jocketty said Bruce had been dealing with the injury for much of the season, and thought that may have been a factor in Bruce's slow start to the season. Bruce is hitting just .216/.352/.363 with three home runs and 14 RBI.

"This may be an indication, because this is something that has been bothering him for a while, it may have been an indication -- I'm not saying it was, but it could explain (his numbers)," Jocketty said. "It's his left leg, and hopefully he comes back 100 percent and takes off like he's capable of."

Unless the rest of the lineup can start turning it around, namely Hamilton and second baseman Brandon Phillips, the Reds will have to hope that Jocketty is right. Their season could depend on it.