The Nationals welcome back their Opening Day catcher after a month spent on the DL.

The Washington Nationals reinstated catcher Wilson Ramos from the Disabled List this morning, adding another potent bat to the lineup for the current National League East division leaders.  Ramos was placed on the 15-day DL after breaking the hamate bone in his catching hand during the Opening Day game against the New York Mets, and he missed the next 32 games.

Jose Lobaton, who was acquired by the Nationals in February from the Tampa Bay Rays, picked up the bulk of the catching duties while Ramos was out, with Sandy Leon serving as his backup, and for the meantime it appears that Washington will carry three catchers.  With three games in an AL park against the Oakland Athletics this weekend, the Nationals may choose to get Ramos' bat back in the lineup as the team's Designated Hitter before ultimately carrying just two catchers, with Leon likely to be the one optioned.

Ramos should provide an added boost offensively to a catching situation that has hit just .219/.299/.333 in 127 PA so far in 2014.  The 26 year old backstop owns a career .269/.323/.444 line in 919 career Major League PA, including a 2013 season that saw him hit 16 HR in just 78 games.  That's the kind of production Baseball America envisioned when they included Ramos in their Top 100 prospect lists prior to each of the 2009, 2010, and 2011 seasons, and it's exactly what the Nationals hoped they were acquiring from the Minnesota Twins in the 2010 trade deadline deal that sent reliever Matt Capps to the eventual AL Central champions. 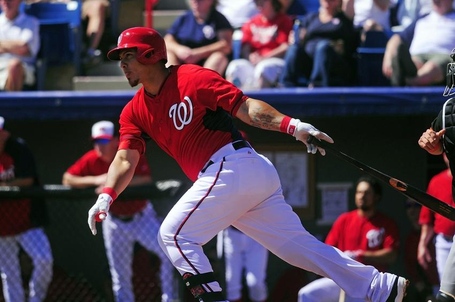 The trouble for Ramos, however, has been staying healthy enough to put his offensive repertoire on consistent display.  After a breakout 2011 season where he hit .267/.334/.445 with 15 HR as Washington's primary catcher, a torn ACL ended his 2012 season in early May, and a series of recurring hamstring issues kept him sidelined for the majority of the first three months of the 2013 season.  He stayed healthy enough and productive enough through the end of the last season, however, and entered 2014 as the team's starting catcher before the hamate injury sidelined him once again.

Ramos was also in the news when he was abducted in his native Venezuela in November of 2011 while playing Winter ball in the Venezuelan Professional Baseball League.

Hamate fractures have often been associated with a drop in power among hitters, but as Ramos noted to MLB.com's Andrew Simon, he doesn't feel that will be the case with him.  Stuart Wallace recently took a detailed look at players who have faced a similar injury as Ramos for Beyond the Box Score, and his results found that players will usually regain the power they once had, but the time frames for that happening may vary due to a litany of factors.

Pitcher Blake Treinen, who allowed 3 unearned runs in 5+ innings Tuesday in his first career Major League start, was optioned back to Triple-A Syracuse to clear a spot for Ramos on the 25-man roster.