The Indians are still searching for their identity this season, but if the team's mediocre performance continues, offloading players might be the most prudent option.

Heading into the 2014 MLB season, the Cleveland Indians appeared set to build on a successful 2013 campaign. After reaching the playoffs for the first time since 2007, general manager Chris Antonetti brought in Rangers outfielder David Murphy, who was coming off a down year but had proven to be a consistent bat throughout his career, while also acquiring several relievers in an effort to shore up a shaky bullpen, including right-handers John Axford, David Aardsma, J.C. Ramirez and Scott Atchison, and left-hander Josh Outman.

The offseason moves have paid off: The Indians rank eighth in the majors in bullpen ERA and Murphy's OPS is 106 points higher than it was last season. And yet, the team is sitting in last place in the AL Central, with a 26-30 record, though they're following up a stretch of four straight losses with a current two-game (and counting) winning streak.

And should the Red Sox be willing to pay it?

Even a million Jose Altuves couldn't stop the Astros from being sellers this summer.

It's too early to call the season a lost one for the Indians—they were hovering around .500 about a week ago—but it's clear there are several issues that must be fixed if Cleveland wants to climb out of the division cellar, let alone contend for the playoffs again.

The Indians are off to a slow start, thanks to poor pitching performances, abysmal defense and a few prolonged slumps from key offensive players. But given the rotation's potential—good pitchers are underperforming—and the team's ability to overcome defensive mediocrity last season, along with the overall weakness of the AL Central, the Indians are far from finished.

As it currently stands, Cleveland would likely look to ship away some of its better players should the struggles continue, but if the team can turn it around, as it has the ability to do, then Antonetti could be looking to make some acquisitions come July.

Judging purely by WAR, only one team in baseball (the Twins) has had a worse experience at first base than the Indians this year. But even for purists who don't trust that stat, Indians first basemen are 28th in runs, 28th in RBI, 27th in homers and 29th in OPS. So yeah, that position falls under the category of "needs."

Nick Swisher has been the main culprit, playing 46 of the team's 56 games at first base, and he's justifying his $15 million salary by ranking among the worst offensive players at his position in the majors.

It's unlikely that the Indians would make any type of move in this case, mostly because Swisher has essentially no trade value with his a) awful performance and b) huge contract. But if the team is willing to move a few pieces around to bring in a replacement and move Swisher to DH—Jason Giami is essentially done—then they could look at players like the Rays' James Loney or the Marlins' Garrett Jones. Either way, expect Swisher to remain in Cleveland.

Right-hander Corey Kluber has been a strikeout machine this year, but nobody else on the Indians staff has found similar success. Justin Masterson, Zach McAllister and supposed breakout candidate Danny Salazar have 5.21, 5.89 and 5.53 ERAs, respectively, and the Indians overall rank 21st in the majors in ERA despite having a bullpen that ranks eighth in the majors in that same statistic.

A variety of factors will determine whether the team makes a move to acquire starting pitching, including whether top arms like Masterson can put it together and if 23-year-old right-hander Trevor Bauer can achieve consistent success this year. 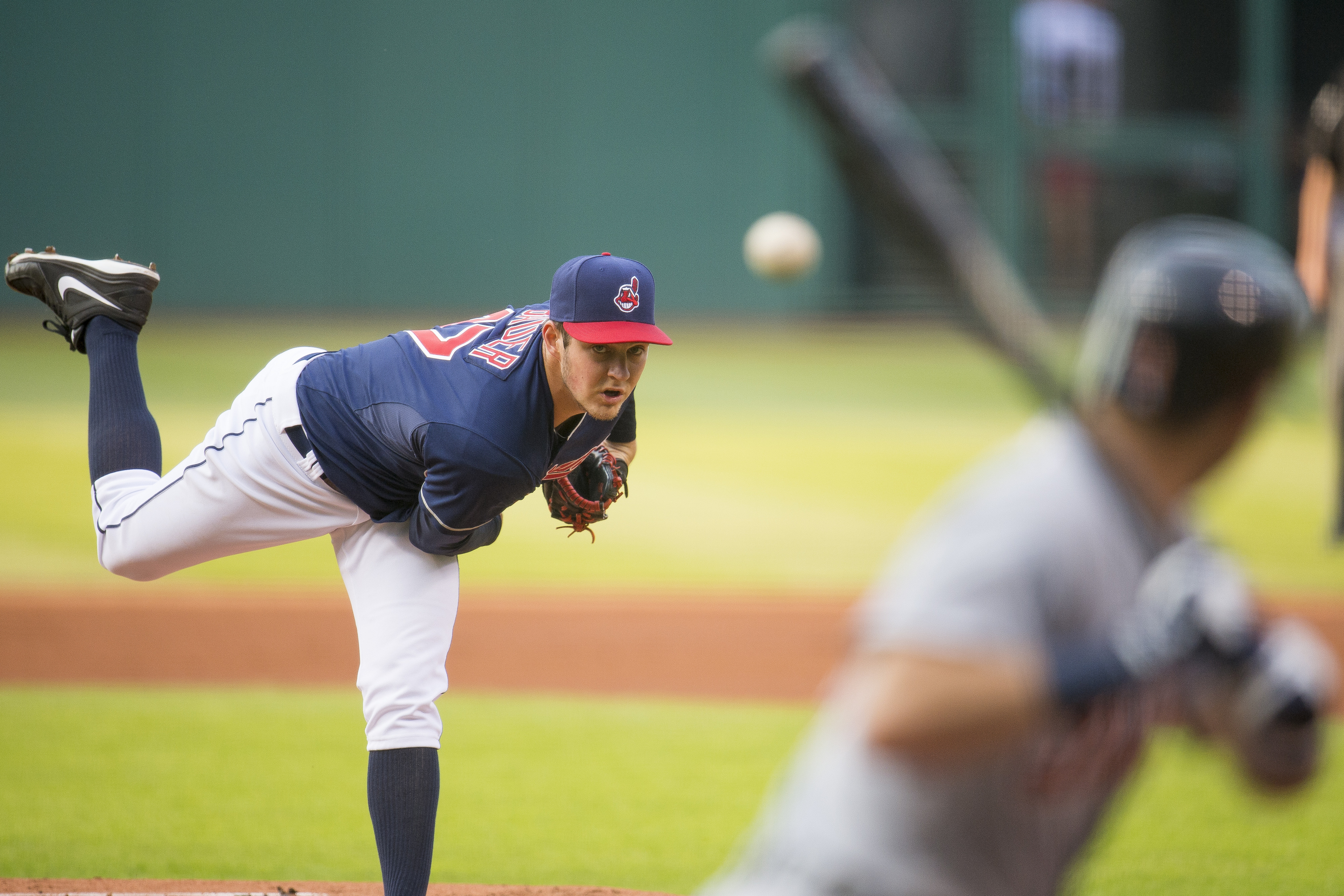 If Bauer can prove to be a reliable member of the rotation this season, the Indians might not need to make a move for a starter. Photo by Jason Miller/Getty Images

Some of the top available pitching talent could include left-handers David Price and former Indian Cliff Lee, as well as the suddenly dominant Jeff Samardzija. Though it's hard to imagine Cleveland making a push for top talent unless the team can show come semblance of a contender, Antonetti will likely have plenty of options should he choose to pursue that route.

Trade Likelihood: High (if in contention)

Trading Cabrera makes plenty of sense. The Indians shortstop is in his walk year, and though he's had trouble at the plate this season, his history of success should intrigue teams in need of a shortstop.

But most importantly, top prospect Francisco Lindor is set to appear in the majors next season, and with a fully capable shortstop on the roster (Mike Aviles) who can fill in until then, the Indians have little reason to keep Cabrera and his .693 OPS on the team.

Join us as we preview every single team

Better yet, there are a host of teams who would likely be interested in Cabrera, including potentially contending teams who have had issues this the shortstop position this season—namely, the Nationals, Rays and, most notably, the Yankees, who will need a replacement for Derek Jeter from somewhere.

It all adds up to a deal involving Cabrera this season, especially if Cleveland wants to receive any value for him.

With a collection of outfield prospects (four in the team's top 20 on MLB.com) and a few attractive trade candidates in the majors, the Indians could look to move an outfielder (or two) this season. Michael Bourn is unlikely to go anywhere given his recent long-term contract signing, but he's also getting old, which bodes poorly for a player who draws so much of his value from speed.