With contention unlikely, the Mets have a few pieces that they should consider moving to set themselves up better for a run in 2015.

Heading into this season, it seemed likely that the Mets would maintain course and use 2014 as one more year to grow. With ace Matt Harvey likely to be back and fully recovered by 2015 and a bunch of available money to spend on the open market in the offseason, it seemed like 2014 would be a year in which they bided their time.

The Mets currently find themselves nine game under .500 at 31 - 40 and in a race to last place with the Phillies. Their Pythagorean W-L implies a 34-36 record through Monday's action, but their third-order wins paint a picture that implies that their 31-39 record through Monday was very much indicative of the quality of the team.

In other words, they are who we thought they were.

Or at least they were until this happened:

Sandy Alderson told us on #FrontOffice that they have the resources to be buyers at the trade deadline....and Niese is NOT trade bait XM 89

Despite that Bowden tweet, it is hard to look at what Sandy Alderson has done as Mets' General Manager and look at their place in the standings and not draw the conclusion that the Mets will be sellers at the trade deadline.

With the NL East appearing to be a three-horse race between Atlanta, Washington, and Miami, and the presumptive favorite for the second Wild Card coming from the NL West, it is hard to envision a scenario in which the Mets have even the remotest of chances of surpassing the competition and finding themselves in the playoff picture come September.

Of course, given that the window for contention likely opens wide next season with the presumed additions of Matt Harvey and top prospect Noah Syndergaard to a rotation that already consists of Jonathon Niese, Zack Wheeler, Dillon Gee and Zombie Bartolo Colon, any players that would likely be contributors to a winning team in 2015 are unlikely to get dealt at the deadline.

Clearly the Mets do not have any intention to ship off Wheeler, Harvey, Syndergaard, or Niese. They're all under club control through at least 2018. The foundation of continued contention is built on their shoulders, or rather their arms. With a slew of decent cheaper internal options for the back of the rotation--Gee, Jacob deGrom, Jenrry Mejia, and Rafael Montero--Colon and his contract that runs through 2015 in which he's owed a relatively modest $11MM would seem relatively easy to move. 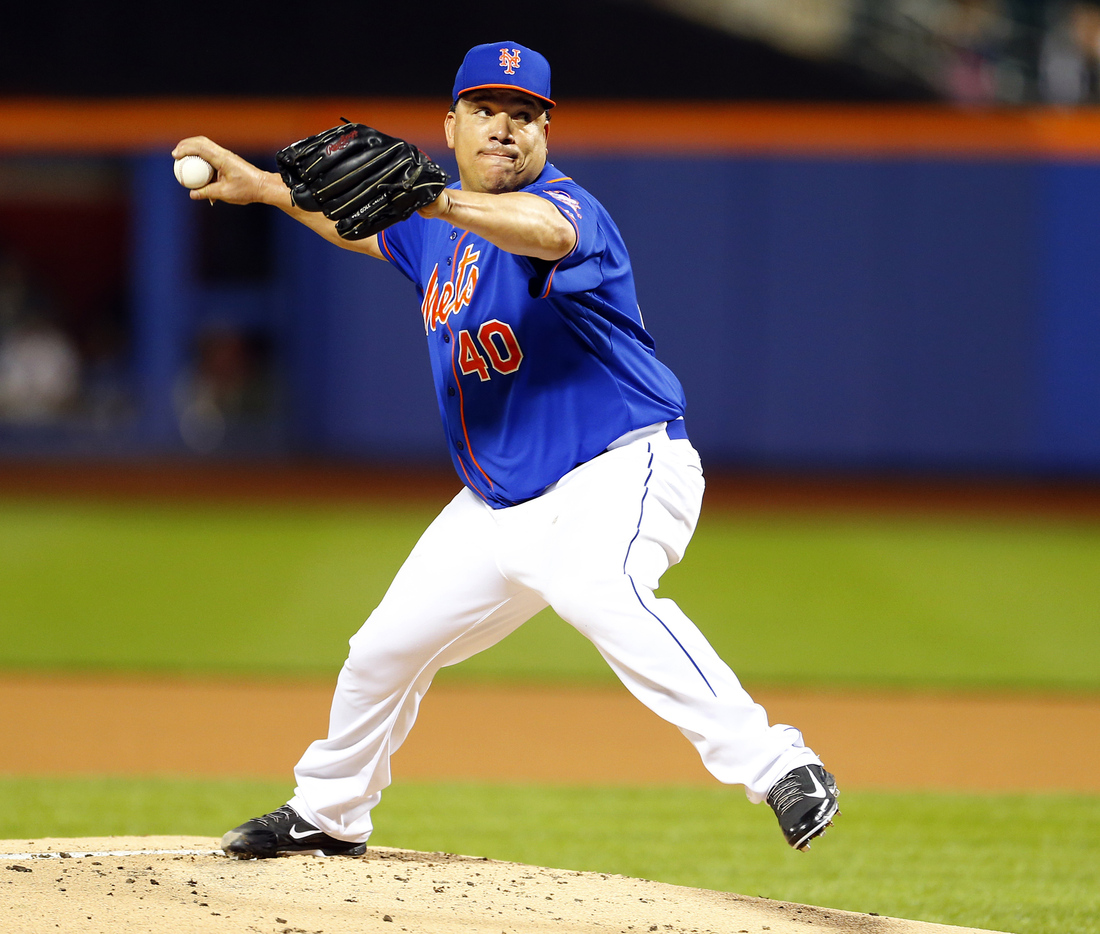 He has underperformed his peripherals thus far this season. Despite owning a career .293 BABIP, Colon's 2014 BABIP sits at .312. His 3.55 FIP, 3.65 xFIP, 3.65 SIERA all point toward his 4.15 ERA being a little worse than he has actually pitched. With his LD% being roughly what it was last season, and a K/BB that is actually sitting at a career-best 5.23, it would seem that Colon would be a decent bet to improve on the results on the field thus far in 2014. He has defied Father Time these past few years, and a contending team could use him both this year and next.

It is entirely possible that Alderson signed Colon to the very reasonable two-year $20MM deal with the intent to flip a more valuable--one and a half years versus a few months--commodity than he'd have been able to trade on a one-year rental. Colon isn't likely to yield a huge return because of the risk inherent in trading for a 41-year-old pitcher, but he could very well net the return of a close-to-ML-ready piece and a prospect to dream on.

Much like Colon, Murphy presents value past the end of the 2014 campaign, as 2015 is his final year of arbitration-eligibility. Murphy is quietly having himself a damn fine 2014 season. He's been worth 2.2 fWAR and 1.6 rWAR through 68 games played and sports an increased BB% that has helped raise his slash line to an impressive .299/.359/.419 with a .343 wOBA and a 121 wRC+. Those are some sexy numbers from a middle infielder. It would seem that his services could better employed on a contending team.

When combining the fact that this is probably the peak of Murphy's value for the Mets with the fact that Wilmer Flores is tapping his finger on the pine waiting to get his number called, it would make perfect sense for the Mets to trade Murphy. More importantly, the return they could get for Murphy would likely exceed that of Colon's. With past trade partner San Francisco getting very little production from the two-headed monster they are employing at second base that consists of journeyman Brandon Hicks and defense-first (and maybe defense-only) Ehire Adrianza, it would stand to reason that there is at least one prime contender in need of help at second base. It wouldn't be shocking to see the Murphy net multiple near-ML-ready pieces.

The Mets don't have to trade their second baseman, but given their current roster construction and his presumed value on the trade market, they probably should.

While he is far from a valuable commodity for potential trade partners, the outfielder is on a one-year deal. He's been just below replacement value thus far, but some of the negative value could be the result of the general noise and unreliability in his small defensive statistical sample. Young would be due the prorated value of his $7.25MM deal, a chunk of which the Mets would presumably be willing to eat if it meant the pot was sweetened a bit. Admittedly, Young would not yield much of a return, but given the fact that the Mets are getting big production out of Juan Lagares and Curtis Granderson while being able to fill out the rest of the outfield playing time with Bobby Abreu and Eric Young, Jr., it would make sense to trade Chris Young and try to get some value out of him. He's not as sexy a trade piece as Murphy, and not as useful as Colon, but he can help team with a thin outfield.

While setting future lineups in stone is reckless given the propensity of prospects to fail, it doesn't hurt to look at what the Mets have coming soon in looking at what they might be targeting. Tunnel vision on the trade market generally doesn't help a team in maximizing its returns.

Given the current roster construction and what is in the pipeline, the Mets wouldn't appear to need anything in the way of starting pitching--at least not ML-ready starting pitching. With Wright and Granderson entrenched at least from a financial standpoint, third base and one spot in the outfield are filled for the foreseeable future. The other two outfield spots can likely be filled with Juan Lagares and a combination of Eric Young and eventually Cesar Puello, who hopefully can be ready at some point next year.

Mets could be buyers at the trade deadline

General manager Sandy Alderson said his club is in a position to acquire major league talent this year, rather than trade it away.

The surprising first place Brewers are poised for a playoff run in 2014.

Travis d'Arnaud should be expected to get every shot to prove that he's the man at catcher, and prospect Kevin Plawecki is currently destroying Double-A, so it stands to reason that the Mets don't need to do anything more than maybe some patchwork free agent supplementation to their catching corps.

With Wilmer Flores likely to inherit the starting gig at second base, that leaves first base and shortstop as the two spots that the Mets could use help at. While the Mets have the available payroll to address these issues via free agency and needn't focus solely on these two areas, a package that included help at one of these spots would help.

The Mets can certainly go forward with Lucas Duda at first, who is at least above replacement level, but they could stand to upgrade the position from a guy whose upside is 1.0 WAR.

At short, however, they are currently trotting out a combination of Ruben Tejada and Omar Quintanilla, who are both producing at sub-replacement value. The internal options at short that Alderson and the Mets organization can dream on are both sitting in low-A-ball right now (Gavin Cecchini and Amed Rosario). Rosario, whose ceiling is probably a bit higher than Cecchini's is still about four years away, and that's if it works out. It stands to reason that the Mets could target a projectable shortstop at Double-A or higher in their trade talks.

Both positions could be addressed via free agency in the offseason of course, but if they can take care of their deficiencies via deadline deals all the better.