The Padres aren't completely out of it yet, but they are 11 games back in the West on June 1.

The Padres have put together just one winning season since 2008. They typically appear in the bottom third of payroll rankings and the NL West is a tough, but general manager Josh Byrnes won't win many fans over on that criteria alone. He has added some promising minor leaguers to the club since taking over as GM in October 2011 -- like Max Fried and Hunter Renfroe -- however, the better part of the club's top prospects are leftovers from Cubs GM Jed Hoyer's last draft in June 2011. Byrnes was with the team for that draft as VP of Baseball Operations, so he deserves some credit, but the team's back-to-back 76-86 finishes speak louder than the promise of minor leaguers.

San Diego can still make something of the 2014 season. They're only five games below .500, and despite trailing the MLB-best San Francisco Giants by 11 games, they could climb back into the Wild Card race with a modest hot streak.

Are the Padres buyers or sellers? SELLERS

On the other hand, the three teams ahead of them in the West appear to be in a much better position to compete this season. The Giants are dominating right now, the Dodgers have what might the most talented roster in baseball, and the Rockies have a healthy Troy Tulowitzki mashing like a pre-downfall Alex Rodriguez.

The Padres have a young core and several of their top prospects will arrive over the next few years, so 2014 probably won't be their best opportunity to compete in the 2010s.

Which players could be moved?

Kennedy will be a free agent after the year and the chance that'd he'd accept a qualifying offer is far too high for the Padres to extend the offer. It'd be nice to get a draft pick in return for Kennedy's strong performance this year, but they seem better served to trade him while they can. Kennedy might appreciate that as well, since being traded would remove the qualifying offer from his list of things to worry about. He might not be a prime candidate for it considering his inconsistent performance in the past, so the Padres could look to secure a return on the trade market in July. 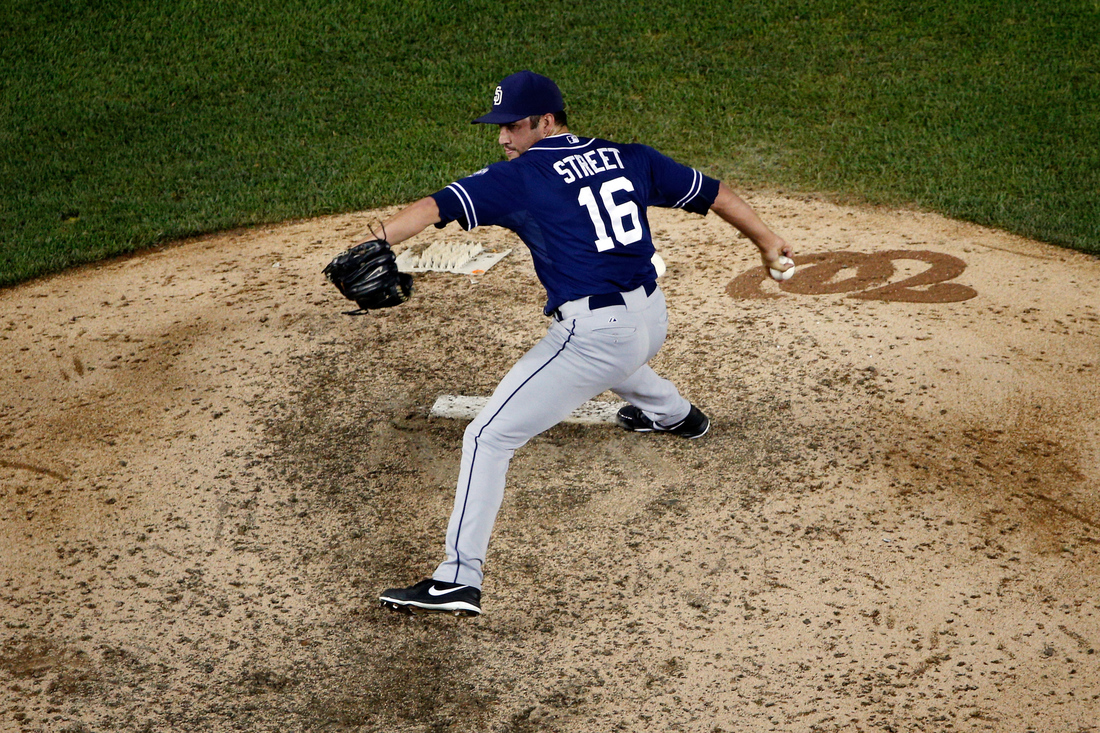 Street is pitching well this year, and if he can stay healthy -- which has been a notable problem throughout his career -- he could net the Padres a decent player or two as a trade chip. Most of the teams in contention right now have their closers in place, but teams that have had bullpen issues -- like the Tigers and Blue Jays -- could benefit from adding a proven late-innings arm like Street.

Quentin's contract is an obstacle that could keep him in San Diego for another year or two. He'll earn $9.5 million this season, $8 million next year, and has a mutual option worth $10 million in his deal for 2016. That's a pretty big commitment for a guy who hasn't played in more than 131 games in a single season during his nine-year career, and hasn't topped 500 plate appearances since 2010.

Smith stats look great, and that might be enough to get another team to send a talented player to San Diego for him, but he's been the explicit beneficiary of a platoon so far this season. He has just 20 plate appearances against left handed pitching this year. That's only 11 more than pitcher Tyson Ross has had against southpaws, so Smith's numbers are definitely skewed to some extent. In any event, he's crushing righties this year, and that's worth something. He'll be a free agent after the season and he won't be a likely candidate for the qualifying offer, so the Padres might as well move him for a long-term piece if they're out of the chase by the end of July.