With contention but a pipe dream, the Phillies are faced with the awkward question of whether or not they can compete in the near future without tearing down everything and starting anew.

Expectations for the Phillies outside (and for the more pragmatic folks inside) of Philadelphia this season were that of non-contention in the NL East. Thanks to the Braves, Nationals, and Marlins collectively deciding to keep things close in the division, the Phillies find themselves a mere seven games behind division-co-leaders Atlanta and Washington. Their proximity to the division leaders is much less the result of their own play and much more the byproduct of the inability of Atlanta and Washington to play baseball worthy of division leaders.

The Phillies sport a 36-45 record through Saturday's action with the second-oldest offense and third-oldest pitching staff in baseball.

With the fifth-worst record in the senior circuit, it's hard to see how things could break right for a second-half surge from the old Philadelphians. Moreover, where most of the other teams in the bottom six in the NL at least have some hope for the future, the Phillies are increasingly decrepit with little in the way of help in the pipeline, which has two players who might be able to provide anything resembling significant help in the next year or so. Ruben Amaro, Jr. continues to run the franchise into the ground as the team seems to be hurtling toward its second-straight sub-75-win season. Any deeper looks at their record suggest that things are even more dire, as only the Padres and Diamondbacks have worse third-order winning percentages in the NL.

Given how little improvement the Phillies are likely to be able to provide via their farm system and how old (and undesirable) the bulk of their core is, Amaro would be best served by trading off whatever more expensive desirable Major League talent he can. With Chase Utley not planning on going anywhere according to a Todd Zolecki article on MLB.com, Ryan Howard being untradeable, and Cole Hamels only moving in a complete firesale as he's signed through at least 2018, there are only so many realistic options for the Phillies to move before the deadline.

Pieces to be moved

Assuming Lee is able to return from the disabled list, there probably isn't a pitcher on the trade market would be be able to guarantee his new team an excellent return. He provided at least 4.5 rWAR and 4.9 fWAR in every season since 2008. Given the annually escalating $/WAR on the free agent market, it doesn't take an extreme flight of fancy to envision Cliff Lee actually providing production equal to his price tag.

Unfortunately for the Phillies insofar as trading the ace is concerned, Lee's price tag is a hefty one. With the remainder of his $25MM this year, the entirety of $25MM next year, and a $27.5MM option with a $12.5MM buyout that turns into a vesting option under the conditions that he doesn't close 2015 on the DL with a left shoulder or elbow injury with 200 IP in 2015 or 400 IP over this season and next, whichever team takes him does so while praying that his elbow injury that he's currently rehabbing from is not a roughly $60MM ticking time bomb. Clearly the market for Lee is not populated by many teams, but there are a few teams who could probably afford to take on Lee and absorb the risk and payroll increase.

The high-dollar closer currently sports a 1.44 ERA. He is owed the remainder of his $13MM contract this year, another $13MM next year, and has a $13MM option that vests if he finishes 55 games next year or 100 combined between 2014 and 2015. Of course, his peripherals--particularly his highest SIERA and xFIP since his rookie campaign, decreased K%, increased BB%, and unsustainably low home-run rates (he hasn't allowed one)--imply that luck has looked favorably upon him thus far. 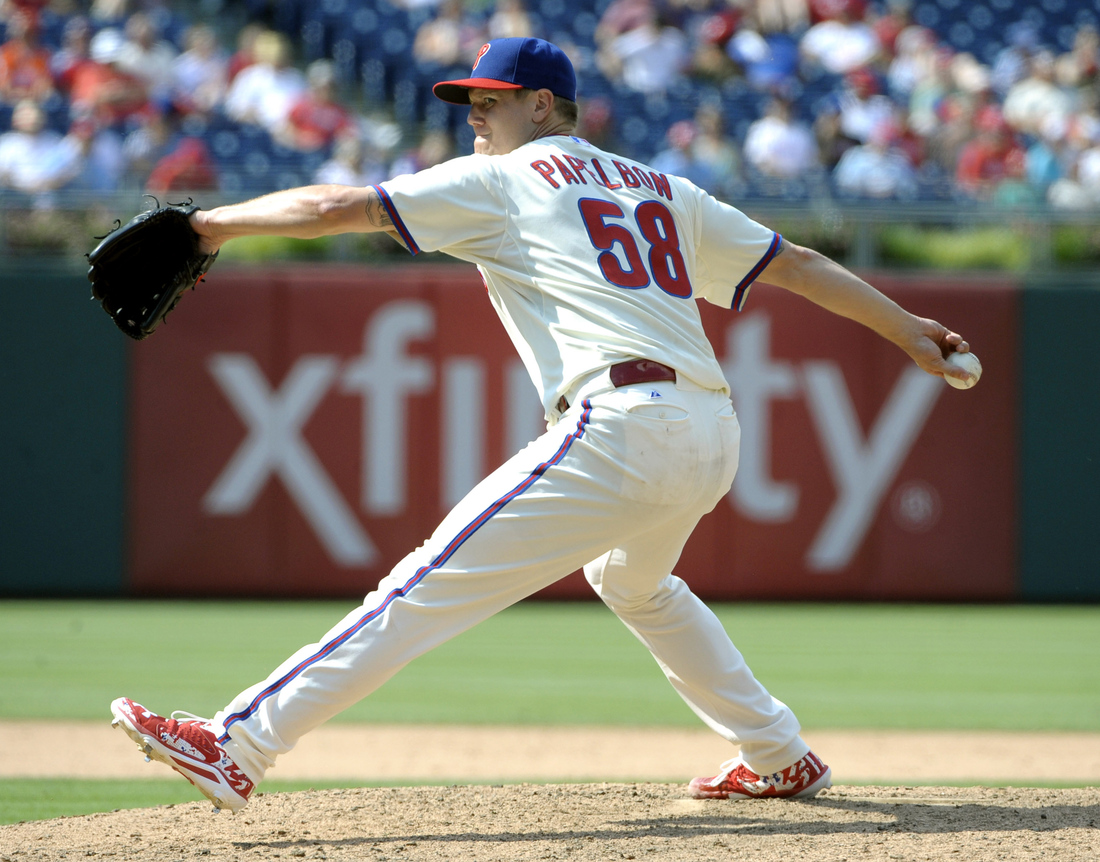 Regardless of what his peripherals may portend, it is probably the best time for the Phillies and Amaro to try to ship off their closer. Nevermind that it is rarely a good idea to pay a reliever $13MM a year. That will hopefully be somebody else's problem. Again, because of the high price tag, the market for the Phillies' player will likely be limited to large market teams in the hunt, which also limits what the return can be. Furthermore, the Phillies' prospective trade partner for Papelbon has to be willing to pay a lot of money for a player unlikely to produce at market value. The Phillies may have to show a willingness to eat some salary to get a promising return for Papelbon.

Unlike the two players mentioned already, Brown is not playing well. While his K% and BB% are virtually the same as last year's, his BABIP is .039 lower than it was last year, and his ISO is hovering around .100. When combined with his typically poor defensive contributions, his .217/.268/.318 triple-slash, .256 wOBA, and 58 wRC+ have helped to make him the second-least valuable player in baseball (-1.1 fWAR).

With next year being Domonic Brown's first year of arbitration eligibility, Brown could prove to be a decent, low-risk reclamation project for a team. He was somewhat useful (if below average) last season. The market for Brown would likely be bearish, so it is hard to imagine Amaro & Co. getting much back for him, but he could well get moved thanks to his price tag.

The Cardinals sit a handful of games behind the Brewers in the NL Central, but the reigning NLCS Champions are poised for yet another playoff run.

The Royals will reportedly add some payroll in mid-July if still in contention, and they'll be looking to shore up their depth and bullpen issues if that happens.

While Burnett hasn't been quite as good as he was in 2013, he would be relatively inexpensive for teams looking for quality starting pitching. Sure, his K/9 is at its lowest point since 2001 and only his 2010 K% was lower since then, but he's still on pace for roughly 2.0 WAR (0.7 fWAR and 1.1 rWAR through 17 starts). With relatively club-friendly terms on his 2015 option, he'd be a decent rental with relatively low risk for whoever may want to partner with the Phillies for Burnett's services.

The career Philly is about 100 plate appearances from his option for 2015 vesting. Rollins's league-average offensive production combined with the bump he gets from solid defense make for a 2014 that has seen him be worth 1.6 rWAR and 1.5 fWAR thus far. Rollins could provide value to a contending team in need of middle-infield help, especially given the fact that he is only owed the remainder of his $11MM contract for this season plus $11MM next season, assuming the option vests and he doesn't end the season with an injury that hasn't healed by next season.

Shipping off Rollins would likely only happen in a complete firesale, but unlike Hamels, Rollins isn't due an absurd amount of money. There are a lot more teams in a hypothetical market for Rollins, though the Phillies would likely be hesitant to part with such a mainstay in Philliesdom.

Teams looking for a spark similar to the one Byrd gave Pittsburgh last season could look to acquire the Phillies' right fielder. His salary for this and next season is $8MM per year with a typically convoluted option for 2016. Despite his defensive shortcomings and his skyrocketing K%, Byrd is relatively low-risk as he is owed so little for someone on a two-plus year contract. When considering that he was a 4.0 fWAR player last year, the market for one of the few inexpensive Phillies who could become available this trade deadline could be more active than any other of the aformentioned players.

Obviously any of the above pieces could and probably should be dealt. It is hard to look at the Phillies' roster and farm system and not see them as one of if not the worst-off team in baseball as far as the future is concerned. They need to undergo a complete overhaul, but to do so would be for Ruben Amaro to admit failure, which general managers are not wont to do.