The Cincinnati rotation is on the verge of adding another potent arm.

It has been a rough eight months for Mat Latos.

He was pulled from a chance to start the one game playoff game between the Cincinnati Reds and the Pittsburgh Pirates on October 1st of last season due to a sore elbow, and ten days later underwent surgery to remove the bone chips that had been the source of the pain.  While that certainly impacted his winter training regimen, he entered Spring Training healthy and ready for another campaign at the top of the Reds rotation.

Unfortunately, that hasn't exactly panned out.

Barely a day into long toss after pitchers and catchers had reported to the team complex in Goodyear, AZ, Latos tweaked his left knee and had surgery on February 14th to repair a torn meniscus.  His recovery cost him several weeks of throwing and resulted in him starting the season on the 15-day DL.  He was knocked around in a rehab start for Double-A Pensacola on April 3rd, and was scratched from his next scheduled rehab start with Triple-A Louisville when he felt tightness in his right forearm.  That was ultimately diagnosed as a strained flexor mass in his elbow, and he was again shut down on April 13th.

There may finally be some good news for both Latos and the Reds, however.  After a pair of rehab outings on regular rest with Triple-A Louisville, Latos is scheduled to pitch again tonight in what may be his final rehab start before rejoining the Reds rotation.  Latos threw 49 pitches on May 25th in 4 IP, and upped his pitch count to 82 five days later through 4.2 IP.  He'll be asked to push 100 pitches this time around, and if he comes out of his start feeling healthy, he'll likely be activated in order to make his next start on regular rest with the Reds. 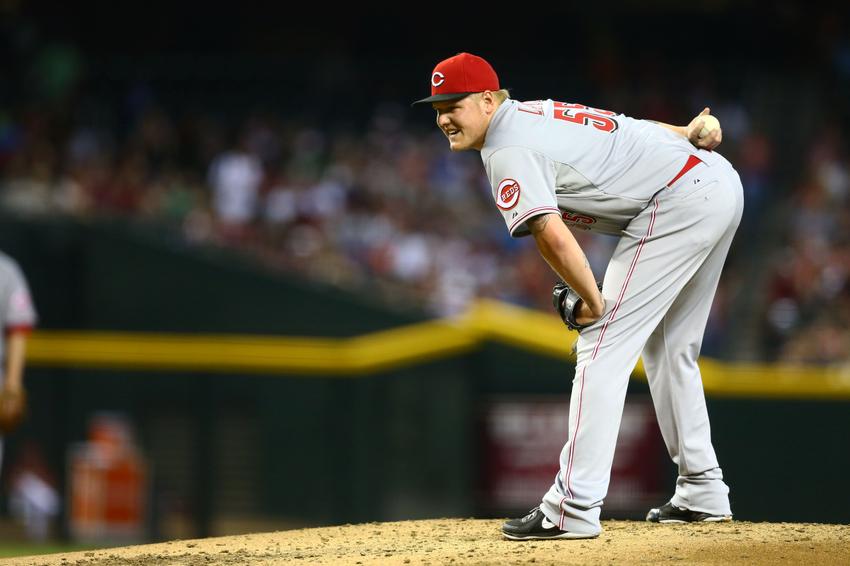 While the Reds will certainly be excited to add a pitcher who has totaled 8.1 bWAR across the 420 innings he's thrown for them over the last two seasons, they will have a tough decision to make regarding which pitcher they pull from their rotation.

Alfredo Simon had been used exclusively as a reliever during his previous two seasons with the Reds, but he's been phenomenal through his 11 starts as Latos' primary replacement in 2014.  He's gone 7-3 with a 3.03 ERA in 68.1 IP, and his 122 ERA+ ranks a solid third among the five primary starters the Reds have used this season.  However, he's also proven he can be a shutdown reliever, and since the 4.23 ERA posted by Reds relievers this season is a mere fraction away from the Philadelphia Phillies NL-worst mark of 4.25, there's a strong likelihood that Simon will be asked to resume his role from previous seasons to help bolster the back end of the bullpen.

With Johnny Cueto and Mike Leake both having spectacular seasons and Homer Bailey inked to a $105 million contract, the only other realistic starter who could be pulled from the rotation is Tony Cingrani.  Cingrani, who had the highest K/9 of any National League pitcher who threw at least 100 innings in 2013, has struggled to replicate the stellar numbers of 2013's rookie campaign.  His ERA sits over a full run higher in 2014 (4.01 to 2.92), his K/BB has shrunk to just 1.84, he's averaging under 6 IP per start, and he's already spent one stint on the DL this season.  While he was used exclusively as a starting pitcher in his minor league years in the Reds organization, he was a closer in college at Rice University, and he has had successful stints as a reliever with the Reds in parts of both 2012 and 2013.  Interestingly, if Latos were to rejoin the Reds and make his next start on regular rest, that would fall on June 9th against the Los Angeles Dodgers, a game in which Cingrani is slated to be the starter.

Walt Jocketty and Bryan Price have a tough decision on their hands, but it's a problem most every team would welcome having.