The upstart Marlins find themselves in a surprising position. Contention. What do they need to do to maintain course?

With just a half game separating the them from the first-place Atlanta Braves, the Marlins are the surprise upstarts in the National League. Their 31 - 28 record is good for fourth-best in the National League, giving them the current edge for the first Wild Card spot over the Cardinals, who are half a game back, and the Dodgers and Nationals, who are each one full game behind the Marlins.

It seems that the only person who saw this coming was internet wunderkind (and MLBDD's own) Chris Cotillo, who had them pegged as second-place finishers in the NL East. Of course, Cotillo was making that prediction based on the fact that the Marlins were sending out one of the most exciting young pitchers in the game every five days, so I doubt even he would have thought that the Marlins would have held it together after getting just 51.2 innings out of Jose Fernandez before losing him to a UCL tear.

Despite losing Fernandez on May 9th, there the Marlins are competing for the pennant in the NL East and in the thick of the Wild Card race.

While it's unlikely that the Marlins will move any of their near-ML-ready talent to help fill out their roster, the Marlins are clearly buyers at this stage in the game.

Thus far the Marlins have gotten by at second trotting out a Lernaean Hydra of Ed Lucas, Derek Dietrich, and Jeff Baker at second with Donovan Solano adding about 50 innings. Of course, two days ago, Dietrich got sent back down to AAA - New Orleans to work on his defense, which appeared to be fundamentally flawed these past few weeks.

Another factor in the equation at second base is the oft-injured Rafael Furcal, who just began a rehab assignment last week. It is possible that the Marlins could get help at second from him, though he has had two separate setbacks in the minors this season that sidelined him for at least a week.

Right now, the Marlins seem content to go forward with Lucas's hot hand getting the bulk of the time at second. What happens when Lucas's .415 BABIP comes crashing down to Earth is anyone's guess, but the Marlins have to be hoping that either Dietrich rights the defensive ship in the PCL or that Furcal is able to successfully make his return to the Majors.

While Henderson Alvarez seems to throw a complete game shutout every time we turn around, the Marlins' pitching staff currently looks like Alvarez, Nathan Eovaldi, and a bunch of spare parts. Tom Koehler has outperformed his peripherals thanks to a .241 BABIP, but for every bit of good luck he's gotten, Jacob Turner has gotten a concurrent bit of bad luck. Rounding out the rotation for the time being is journeyman Randy Wolf, who has had just one season since 2010 in which he was worth more than 0.7 fWAR. 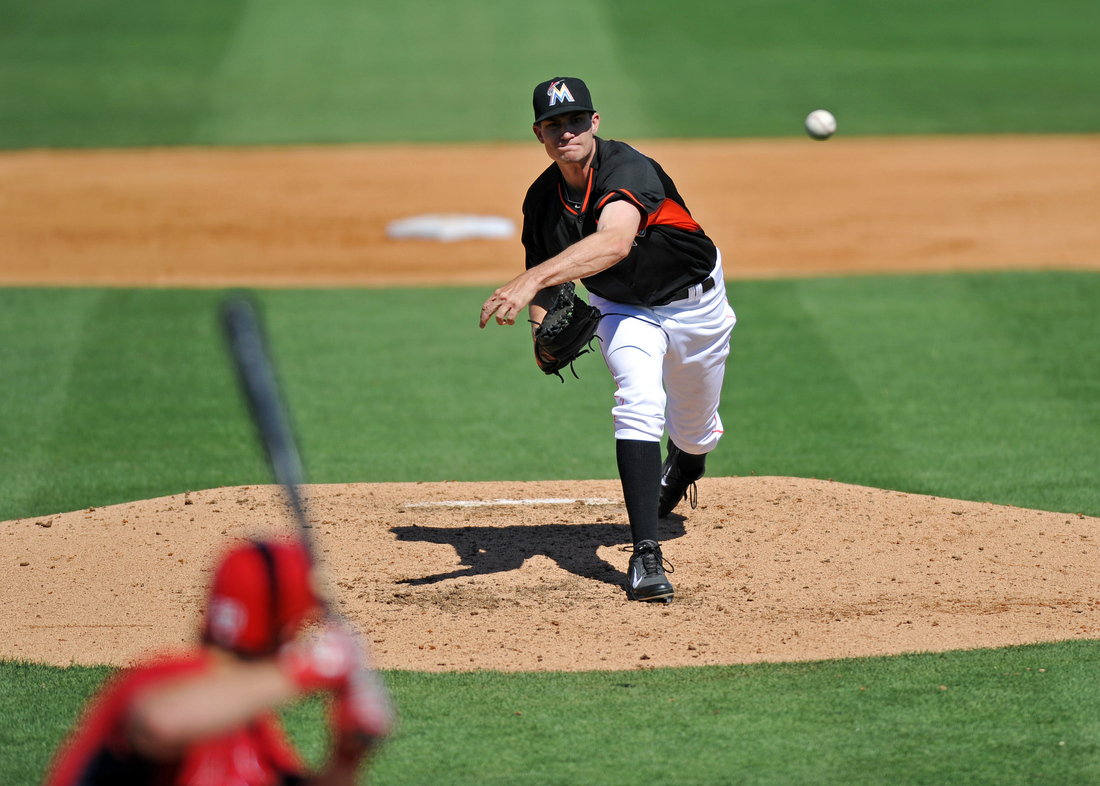 They've already turned to prospect Anthony DeSclafani for a couple of starts, but stud prospect Andrew Heaney is the help from the minors upon which the Marlins are really pinning their hopes. Still, one cannot assume that every pitching prospect is going to pan out, and there are three question marks in the rotation right now. It stands to reason that the Marlins could go shopping for some addition starting pitching depth, though one would have to assume that this wouldn't be of the impact variety.

If I'd written this piece last week, the need would have been even more glaring. Alphabetical order comes back to bite me again. This past week, the Marlins traded away their competitive balance pick (39th pick of the draft) for Pirates reliever Bryan Morris. Morris had just over one year of service time accrued, so the Marlins will control the righty for this year plus at least the next four seasons. Of course, Morris hasn't been particularly valuable in his time in the Majors--career -1.8 fWAR, 0.3 rWAR in 95.2 IP of relief--but he's a live arm whose minor-league track record would seem to portend better than a 13.6% K-rate. The Marlins also just signed Kevin Gregg to a minor-league deal and were in talks with the A's to acquire Jim Johnson.

Clearly the Marlins felt the need to add relief pitching, especially after losing Carter Capps to probable Tommy John surgery (he was just transferred to the 60-day DL), but it would be hard to argue that either Morris or Gregg are particularly helpful salves to their wounds. Nick Wittgren could be up to help soon, given the Marlins' aggressive promotion philosophy, as could Arbut the Marlins could definitely still use help in the pen.

The Marlins possess a farm system stocked with a slew of projectable arms and some offensive pieces with upside.

Is Gregory Polanco being promoted?

Conflicting reports are out there, but we're hearing that he is in fact coming up.

Injuries have ravaged Tampa Bay this year and they sit 13 games below .500 at this point, so a July sell-off is a safe bet.

While Andrew Heaney is most assuredly off-limits, as he's the only potential high-impact talent they have that's pretty much Major League ready, the Marlins could certainly use some of their pitching depth to fetch solid trade deadline pieces. They've got a slew of live arms throughout their system, and guys like Justin Nicolino, Trevor Williams, Jose Urena, and Jarlin Garcia have the upside teams like to dream on.

Looking at the lay of the land in the outfield in Miami, it is difficult to see where Jake Marisnick fits in. The emergence of Marcell Ozuna has left the player who was thought to be the key get in the blockbuster deal with Toronto two years ago out in the cold. Of course, Marisnick did himself no favors by slashing .183/.231/.248 when he got promoted last year, and he's done himself no further favors in his first taste in AAA, managing a meager .268/.313/.394 with a .315 wOBA and an 84 wRC+. That said, it is far too early to give up on a prospect like Marisnick, a top 100 prospect three years running on both Baseball America and MLB.com's lists. While he may not have a clear place in Miami's outfield, he is the near-ML-ready talent that so many teams out of contention are looking for to accelerate the bounce-back.

The Marlins' surprising success has been built upon the rapid ascent of many of their prospects. Thanks to this accelerated progress, the Marlins find themselves in the market for talent. While they could certainly use another impact bat--no one's talking about it, but they certainly have the available payroll and could use the addition of Kendrys Morales's bat, though that would relegate Garrett Jones to back-up 1B / fourth-outfielder duty--these other areas of need can easily be addressed by way of trades without mortgaging the future.