The Rockies shortstop could request a trade if his team continues to lose, and he's already expressed his readiness to leave. But there might be too many barriers for a Tulo trade to actually happen.

Troy Tulowitzki might be the logical choice to replace Yankees shortstop Derek Jeter as the face of Major League Baseball, or at least of the shortstop position, but that will be an awfully difficult task for Tulo to accomplish if he continues to play on the losing Colorado Rockies out west.

Trade speculation has begun to surround Tulowitzki during the past few weeks, mostly because of his comments concerning his interest in moving out of Colorado. But how realistic would that be? Reports indicate not to expect a deal anytime soon, though it's admittedly not out of the realm of possibility.

Indeed, Tulowitzki is beginning to show unrest, according to CBS Sports' Jon Heyman and FOX Sports' Ken Rosenthal. The Rockies shortstop met with team higher-ups to give them the message that he's interested in being traded if the team's fortunes don't improve, and he also recently told the Denver Post that he wants "to be somewhere where there's a chance to be in the playoffs every single year." 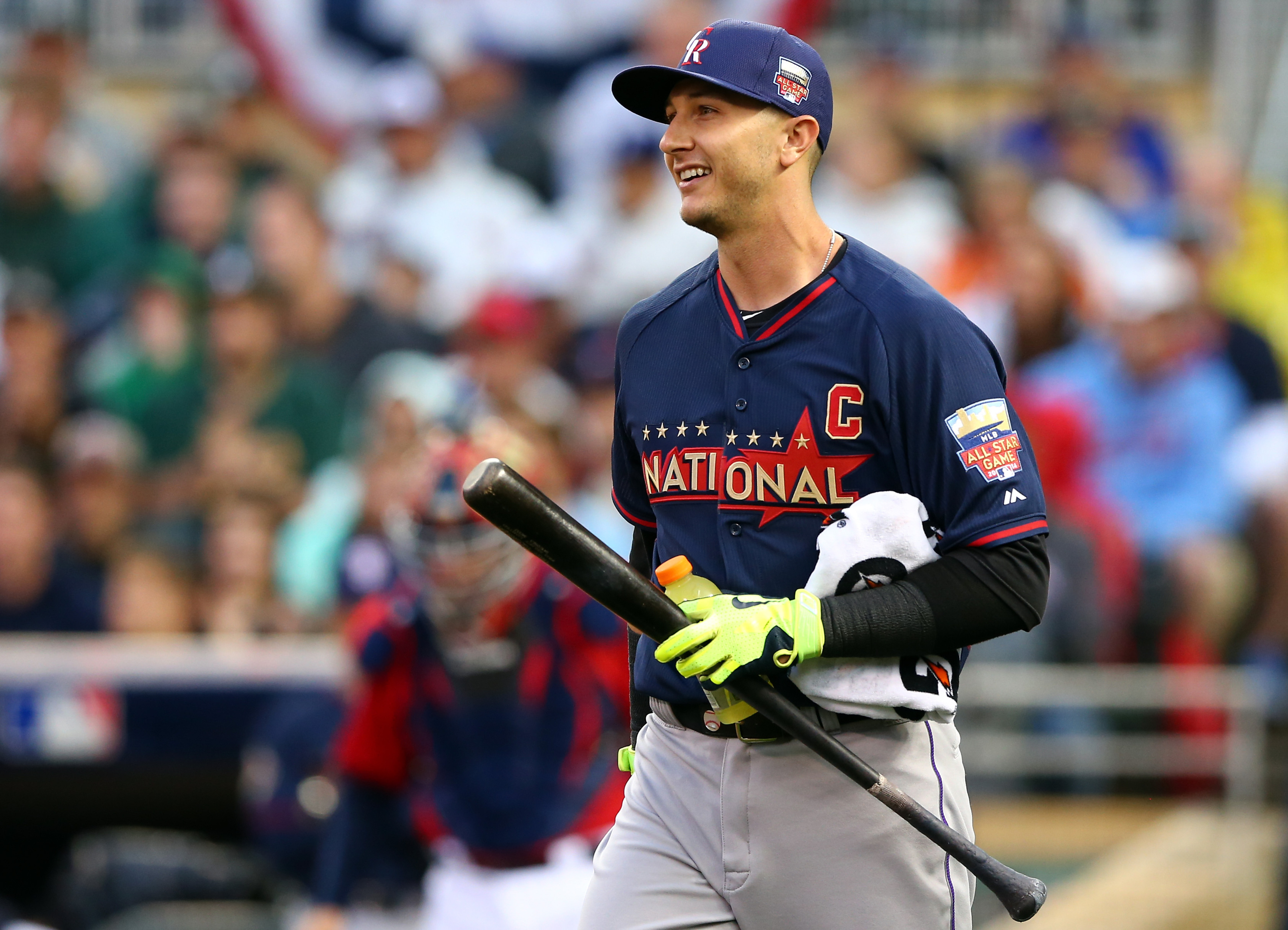 All-Star Game appearances and Home Run Derby captainships are nice, but a title would sure look good on Tulo's resumé. Elsa/Getty Images

But even if the team actually decides it wants to swing a deal involving Tulo, putting something together would be challenging, to say the least. The question, of course, would be what the Rockies could get in return, given that Tulowitzki will in all likelihood finish the season as one of the top players in baseball (a position he currently holds). Perhaps his asking price will be steep enough to steer everyone away.

It's a tricky situation for the Rockies, who presumably have no interest in continuing to lose as their star hitter grows more and more disgruntled. But they would also have to find the right trade involving Tulowitzki (no easy task), on top of perhaps resigning themselves to several rebuilding years if the return for the All-Star shortstop would consist of only top prospects—a very likely scenario.

It's also a tough situation for Tulowitzki, who'd love to stay with the same team throughout his career but would also surely leave Colorado in a heartbeat if he knew he could find his way to a winning team.

In terms of potential destinations, several teams would be obvious fits because of impending shortstop vacancies, with the Yankees, Orioles and Dodgers coming to mind. The Yankees farm system resembles a barren wasteland, so they'd be hard pressed to put together an equitable trade package for Tulo, but the Dodgers and Orioles could have enough young talent to entice Rockies general manager Dan O'Dowd.

As Rosenthal notes in his column, injuries have hampered a Rockies team that could be much better than its record indicates. The team actually started off relatively hot, sitting half a game out of first at the end of April, but with five starting pitchers suffering from various ailments in addition to the losses of key bats like Carlos Gonzalez, Michael Cuddyer and Nolan Arenado, it's hard to imagine any team succeeding with so much talent out of the lineup. 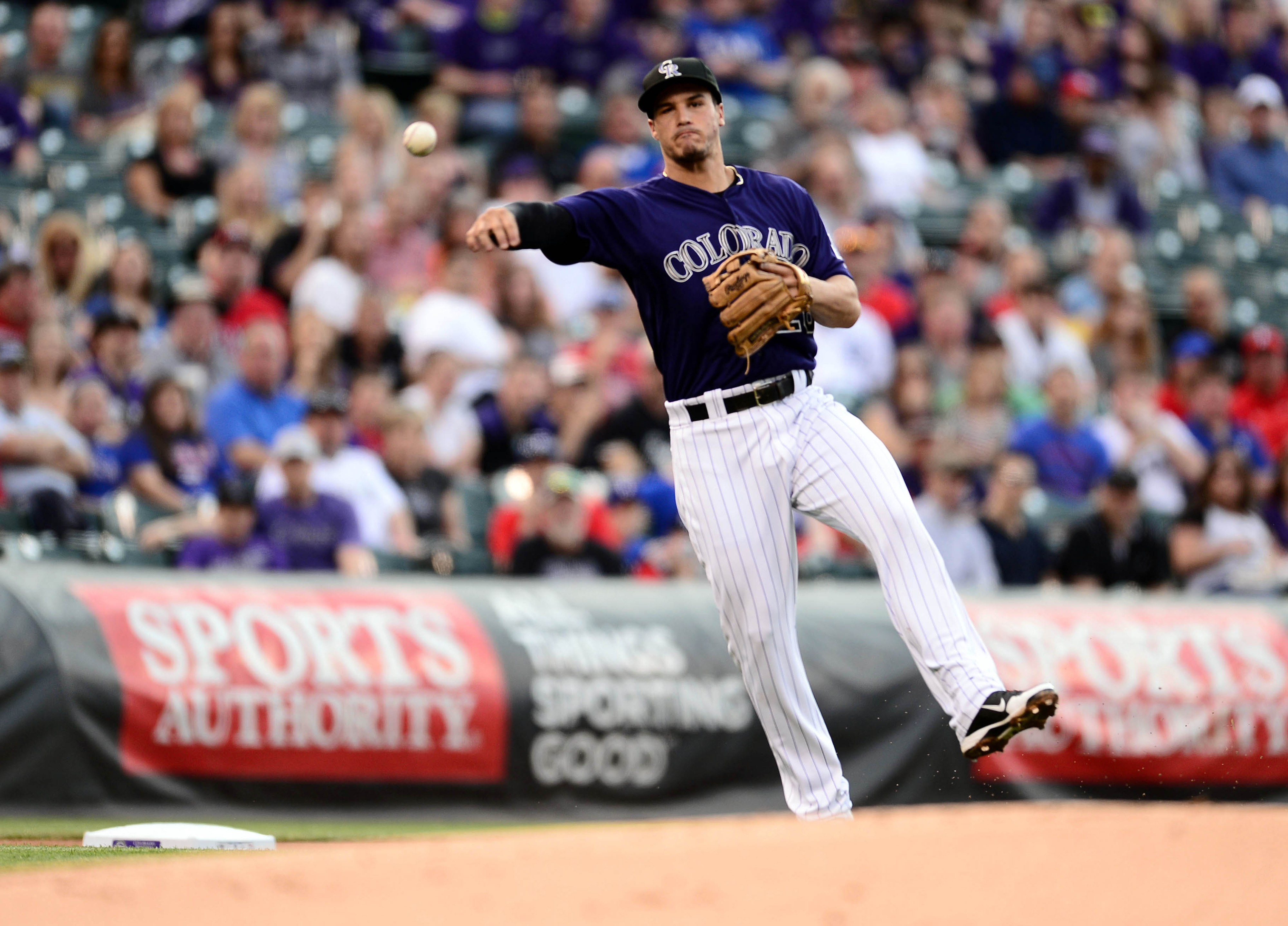 Players like the slick-fielding Arenado might keep Tulo around for the long haul. Ron Chenoy-USA TODAY Sports

The Rockies are effectively out of the playoff race this season, but a few key offseason acquisitions combined with some better injury luck next season might just give them hope, which could dissuade management from considering a Tulo trade.

Don't forget, despite all signs pointing otherwise, Tulowitzki isn't perfect. The discrepancy between his home and away statistics (.417/.497/.748 at Coors Field vs. .265/.367/.463 elsewhere) shouldn't be overlooked, and that's not unique to this season.

Despite a trio of big names already off the market, this year's crop of starting pitchers with a chance to be traded presents a number of worthwhile options.

Of course, an .830 road OPS is nothing to scoff at, and there's no telling which slash line Tulowitzki would tend toward if he were to play for a different team, but there's still the issue that he'll command a massive asking price despite almost certainly seeing his numbers fall if he doesn't play half his games a mile above sea level.

There's also the issue of Tulowitzki's fragility, given his five DL trips throughout his career. He'd averaged just over 120 games per season (excluding his inaugural 2006 campaign) heading into the season, and he last played 150 games in 2009. So, on top of the difficulty of finding a deal that works out for all parties involved (a hugely complicated matter with a player of Tulowitzki's caliber), teams might be unenthused by some of the warning signs surrounding a player with such a hefty price tag.