Unlike the starting pitching market, which has seen some of its top talent switch teams already, the outfield market has been left largely untouched. That will change in the next two weeks.

This year's crop of outfielders on the trading block might lack the potential for a bona fide blockbuster deal, but the sheer quantity of trade candidates will ensure at least a few interesting deals over the next few weeks leading up to the July 31 deadline.

Outside of Matt Kemp, Alex Rios and Ben Zobrist (who isn't a true outfielder), many of the outfielders who appear poised to switch teams bring more value as guys who can fill holes in a roster, as opposed to game-changers who will shift the landscape of the playoff picture.

Either way, there should be no shortage of teams looking to buy and sell as the clock continues to tick toward that magic final date. Plus, the fireworks haven't even started yet. The most significant outfield move of the season thus far has been Seth Smith's recently signed two-year contract extension with the San Diego Padres, effectively wiping him off the trade rumor map.

Let's take a closer look at who is looking to buy, and which players will likely be on the move.

Perhaps no contending team is more evidently in need of outfield help than the Mariners, who have been linked to several potential trade candidates over the past few weeks.

The Giants and Reds have holes at second base, and a deal for Zobrist could be the perfect solution.

M's looking at Byrd, who could block deal

The slugger may be willing to waive his no-trade clause for a deal to the Mariners.

Giants, Reds, Mariners all interested in Zobrist M's looking at Byrd, who could block deal

That means the M's will be in the market for corner outfielders, and with so many left and right fielders on the market, it's hard to imagine Seattle will remain complacement.

It seems odd to see the Mets on a list of buyers, but here they are.

The Mets outfield hasn't necessarily been bad, but the players who have been starting (particularly Kirk Nieuwenhuis) don't have much of a history of success and would likely do better as bench contributors. The Mets also have some ground to make up in their division, and they'd have to do that by making some pretty serious moves—like securing a reliable outfielder with a history of prior success.

One possibility for the Mets would be to try to trade for Alex Rios, who has a connection with special assistant J.P. Ricciardi from their days in Toronto. In a tough AL East division, that could give the Mets the advantage they need, and also help prepare them for next year, when they'll have Matt Harvey back.

But it's not just the Yankees' seemingly unlimited money supply that has them here. Though they sit just five games out of the AL East lead, their outfield—which ranks 19th in the majors in WAR—could use a boost.

There's also the possibility that general manager Brian Cashman deals Ichiro Suzuki, which would leave a hole in right field. But even if Ichiro stays on, the Yankees have little in the way of outfield depth, and even a minor acquisition could go a long way for them. With so many cheap outfielders on the market, the Yanks could buy low on someone in need of a change of scenery (Nate Schierholtz, perhaps) and reap the benefits down the stretch.

If everyone stays healthy, the Giants could be okay with their current outfield of Michael Morse, Angel Pagan and Hunter Pence.

But there's always the issue of depth, and right now, the Giants don't have much. Pagan's absence has made that painfully evident, with Gregor Blanco filling in for Pagan during the latter's DL stint. The results haven't been pretty.

The Giants have been linked to Ben Zobrist, who could also play second base, but either way, the outfield is pretty thin in San Francisco.

Oscar Taveras is a great prospect, but he has no place starting for a contending team as long as he puts up his current numbers.

The Cardinals are in an interesting spot because they certainly have enough outfielders quantity-wise: Matt Holliday, Jon Jay, Allen Craig, Peter Bourjos and Taveras. But the latter three have all struggled this season, and it wouldn't hurt the Cards to make a move for a reliable right fielder. In the crowded NL Central this year, it will end up paying off to fill as many roster holes as humanly possible. Trust me. 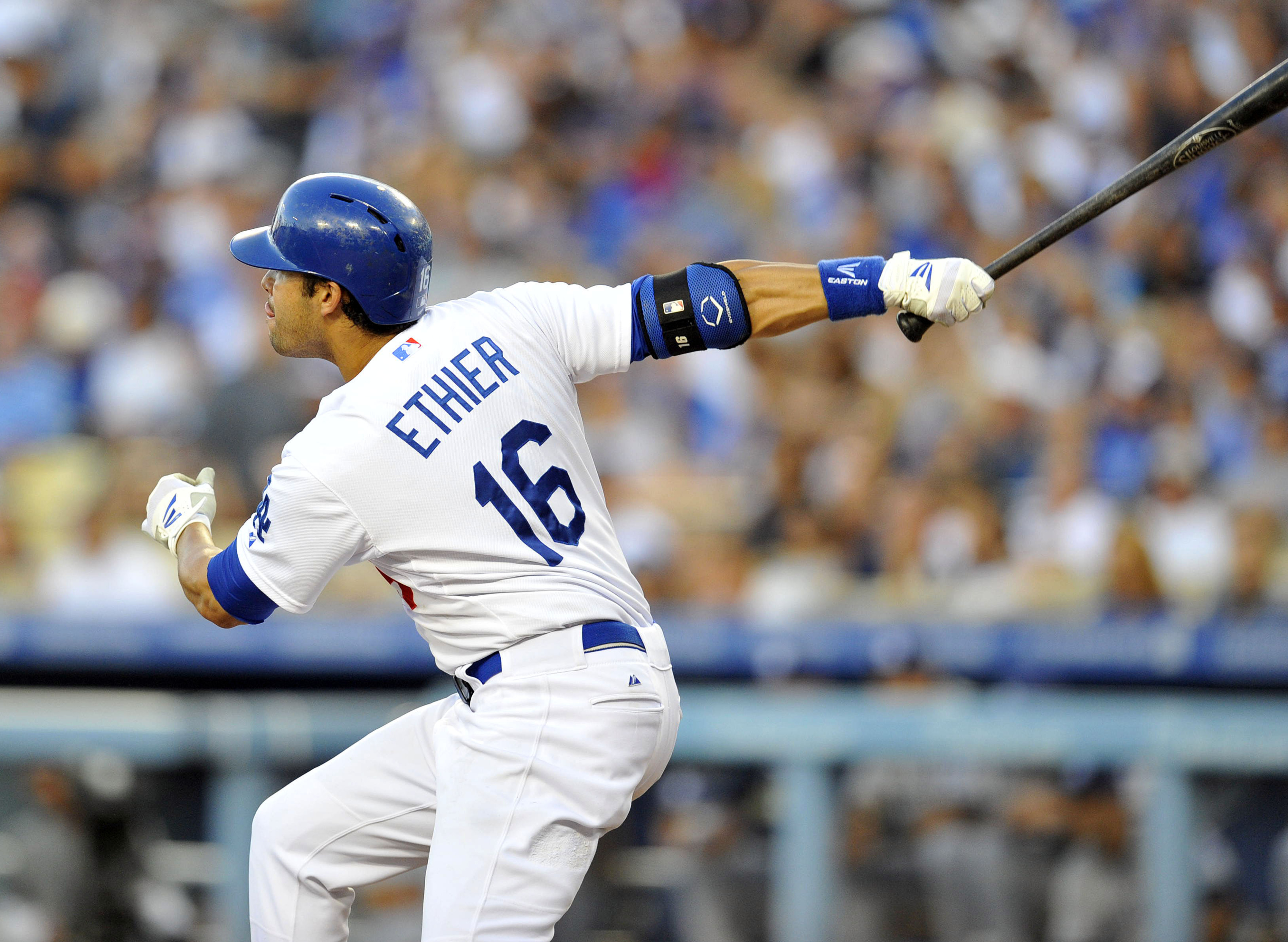 Out of the trio of Dodgers outfield trade candidates, Ethier could be the most likely to switch teams. Gary A. Vasquez-USA TODAY Sports

That means Matt Kemp, Carl Crawford and Andre Ethier are each decent bets to leave—it's just a matter of who goes.

When it comes to Kemp, getting a deal done will be tough because of his massive salary. But in that case, who better to turn to than the Yankees? Ichiro doesn't appear physically capable of being an everyday starter in right field, and if the Yanks could secure an outfield of Brett Gardner, Jacoby Ellsbury and Kemp (plus Ichiro as the go-to guy off the bench), that would be tough to compete with.

But perhaps the likeliest trade candidate is Ethier, who appears to be the odd man out in the Dodgers' outfield dilemma. For teams looking to buy high on an underperforming player, Ethier could be the perfect fit. 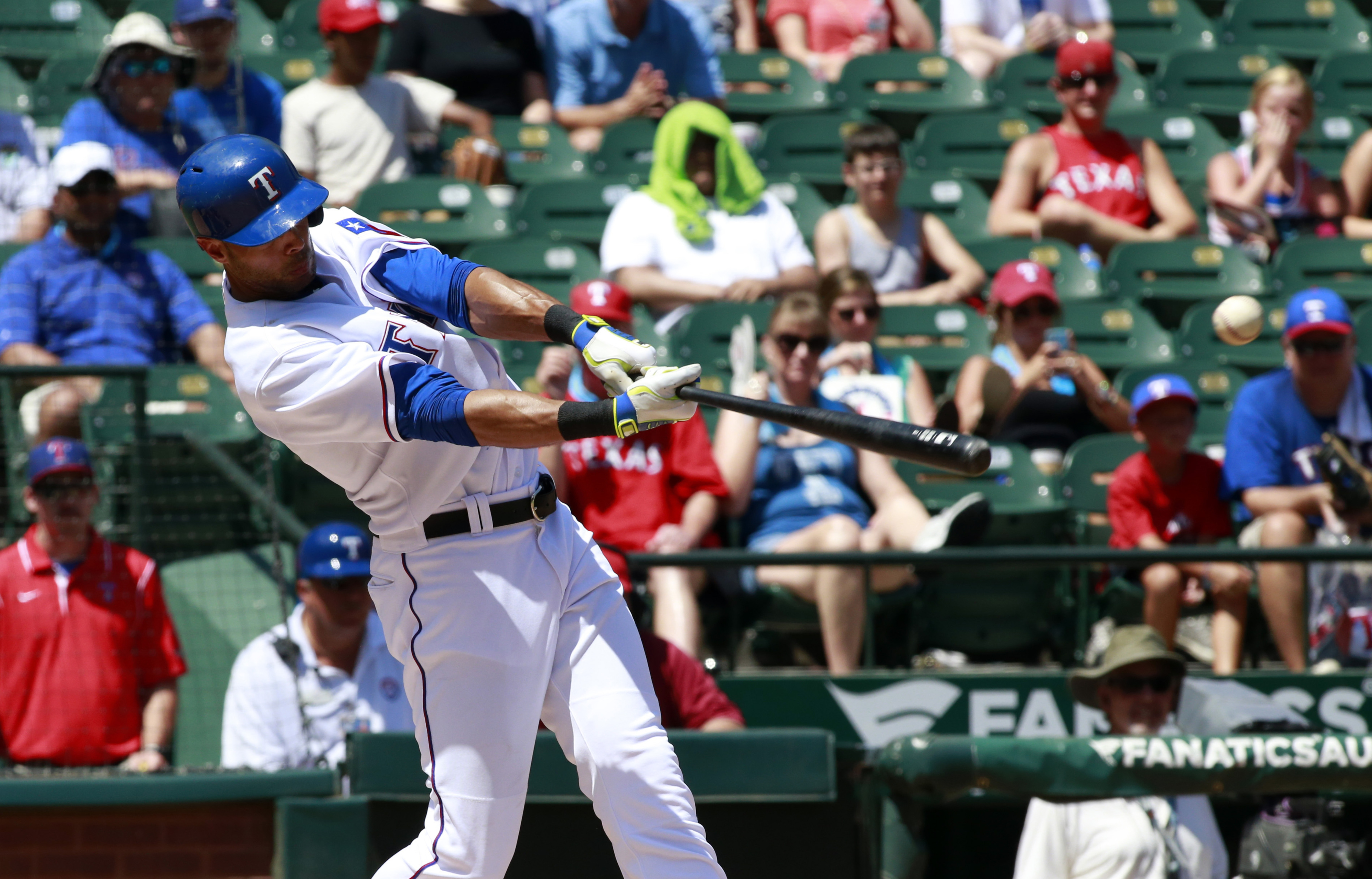 Rios' power might not be what it used to be, but his 112 OPS+ says he's still a valuable hitter. Tim Heitman-USA TODAY Sports

Rios has strung together another solid season, despite playing for the Texas Rangers, one of the American League teams that struggled the most during the first half.

The poor start is exactly why the Rangers might be looking to trade Rios, who has a $13.5 million team option in 2015. He'll likely fetch a good return, too, given his strong first half and general consistency over the past two-and-a-half season.

But just how valuable is Rios? On paper, some of his numbers look pretty, like his .305 batting average and league-leading eight triples. But for such a hefty price tag, some teams might be hesitant to receive a player with just four homers on the year (in the hitter-friendly Rangers ballpark, no less), questionable success on the basepaths (16 steals, eight caught steals) and poor fielding.

Either way, the Rangers will likely make a push to deal Rios, and as one of the top outfield talents on the market, he won't come cheap. 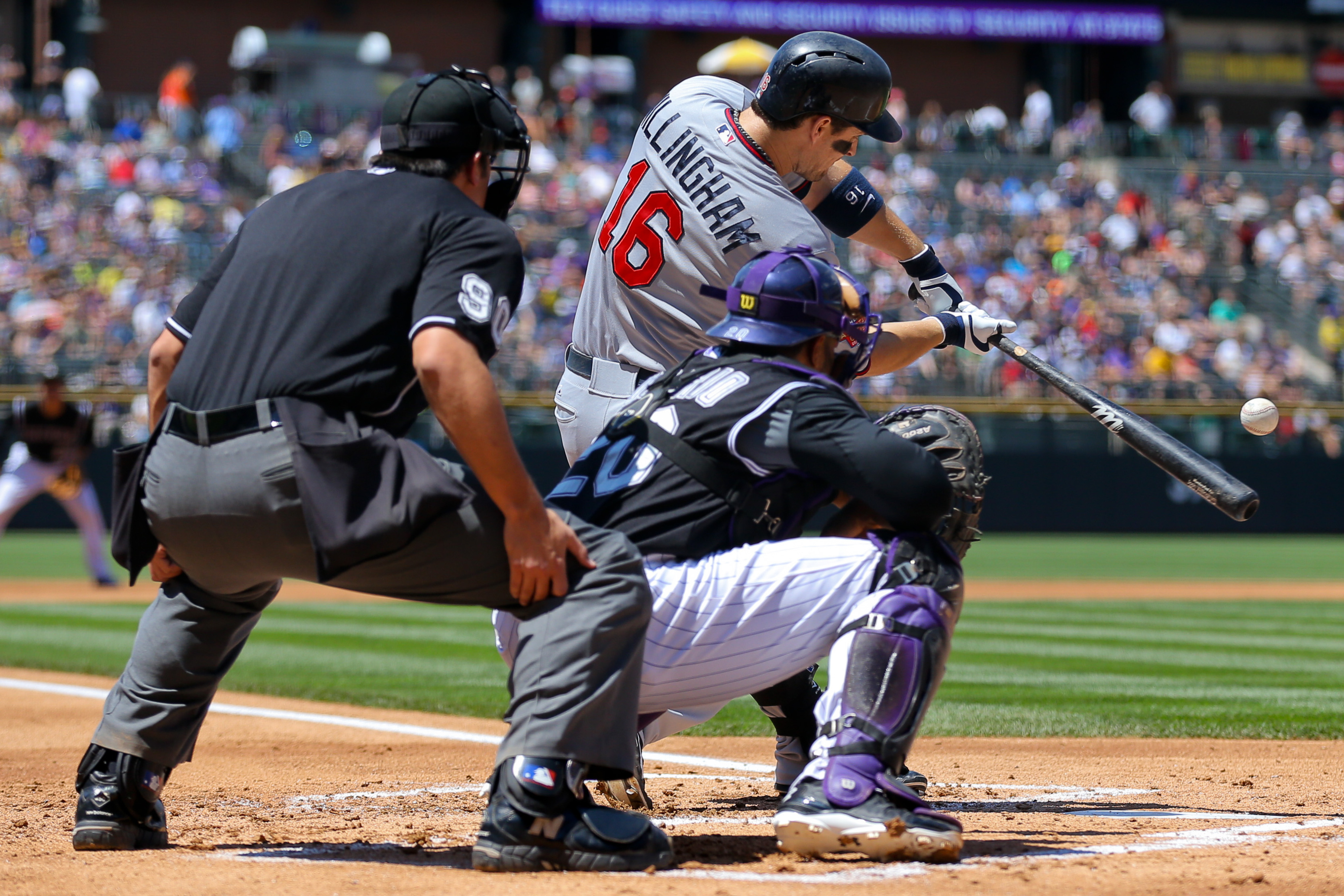 Willingham's value is deceptively skewed by his low batting average. He could bring cheap value to a contending team. Justin Edmonds/Getty Images

Willingham has cooled off significantly from his hot start, but he's still a valuable commodity on the market. Indeed, while his .212 batting average doesn't look pretty, he still gets on base a lot (.362 OBP, 34 walks in 199 plate appearances), and his power (eight homers, one every 19.5 at-bats) is more than negligible.

The Twins will also be looking to sell, given Willingham's expiring contract at the end of the season and their 10.5-game deficit in the AL Central.

As far as Willingham's potential destinations, the Mariners could be a good fit, especially because they'll likely be interested in cheaper players (Willingham's salary is a respectable $7 million) and someone who can reach base with relative consistency. But then again, that's true for any team, so expect Willingham to be in demand during the next couple of weeks. 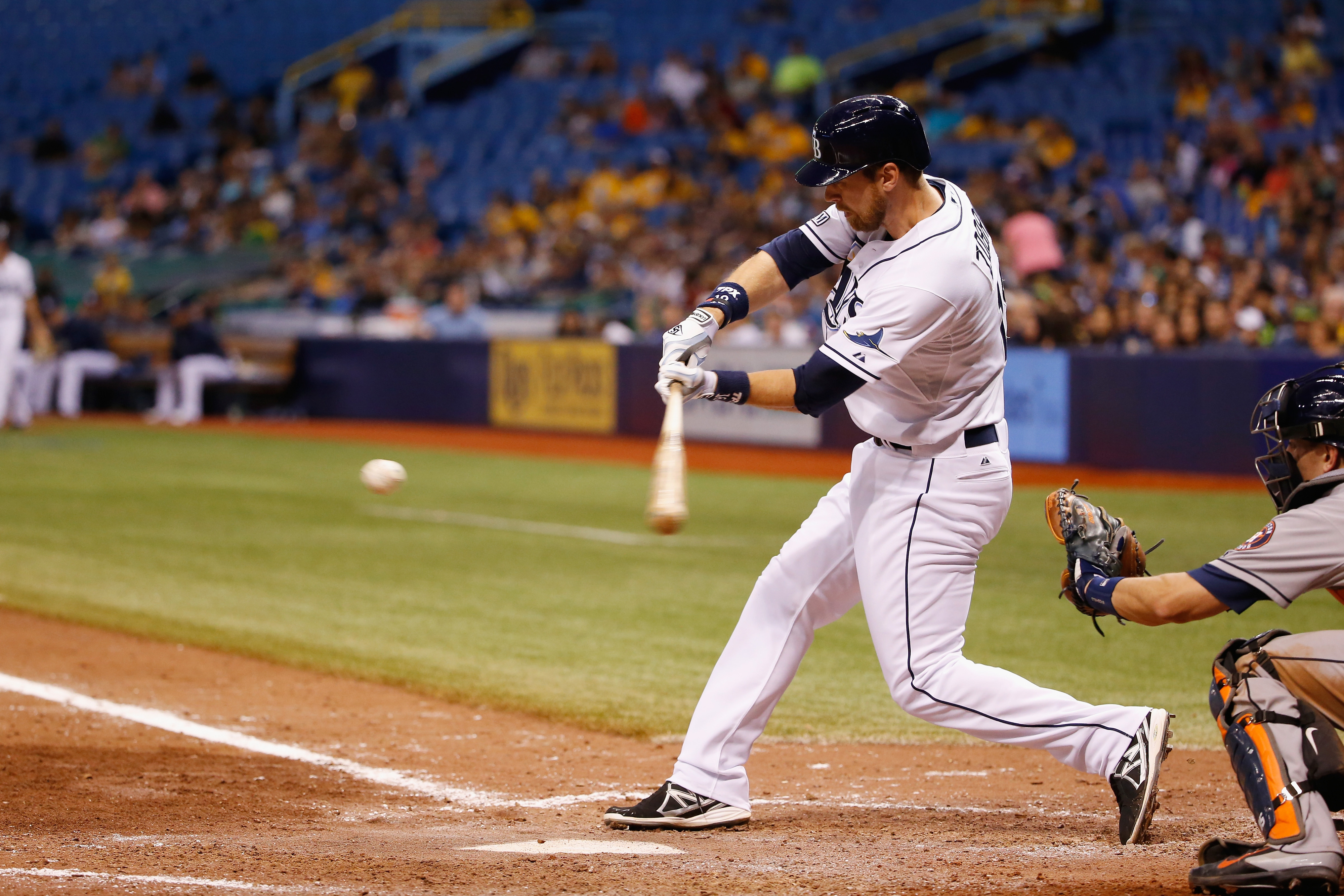 While not a regular outfielder per se, Zobrist has played 15 games in the outfield this season and has done so competently.

All kinds of teams have been linked to Zobrist, including the Mariners and Giants, and why not? He's cheap, he's signed through 2015, he gets on base and he can play just about anywhere on the field. He won't come cheap, as the Rays will likly ask a lot in return, but contending teams will likely be all over Zobrist as July winds down.

Byrd has been one of the better-performing outfielders on the market this season, posting a .795 OPS with 18 homers and 54 RBI. He's also an attractive candidate because his contract runs through at least 2015, with a vesting option for 2016, and he makes just $8 million annually in each of those seasons.

Byrd can veto deals to the Mariners, Royals, Blue Jays and Rays, and he has voiced his thoughts on his own trade rumors.

"I don’t want to get traded," Byrd said, via CSNPhilly.com's Jim Salisbury. "I signed a two-year deal here for a reason. The thought process was to retire as a Phillie. At the same time, this is a business and I know how it works. If trading me makes the organization better, I have to go with it."