One AL West power may be eyeing their rival's prospect.

The Oakland Athletics have scored the second most runs in baseball and currently sport the game's best run differential, but that hasn't stopped them from seeking ways to improve their club.  They've already swung the season's biggest trade by landing Jeff Samardzija and Jason Hammel from the Chicago Cubs, and as Susan Slusser of the San Francisco Chronicle notes, Oakland has interest in Seattle Mariners infielder Nick Franklin, as well.

It's no secret that the Athletics are looking for potential additions to their middle infield.  Despite their otherwise potent offense, the .565 OPS produced at 2B by Oakland this year is the worst in the AL, and Eric Sogard has battled injuries along with iffy offense for the past two seasons as the usual starter there.  Primary SS Jed Lowrie and utility IF Alberto Callaspo have also hit considerably worse than in previous years, and both are set to be free agents following the 2014 season.

While those short term concerns are obviously a factor in any potential pursuit of Franklin, there's also the larger issue of the loss of top prospect Addison Russell in the blockbuster Samardzija trade, as the consensus Top 5 prospect profiled as Oakland's SS of the future.  His void in the Athletics' farm system leaves quite hole, as there's not another dynamic IF prospect close to being MLB-ready. 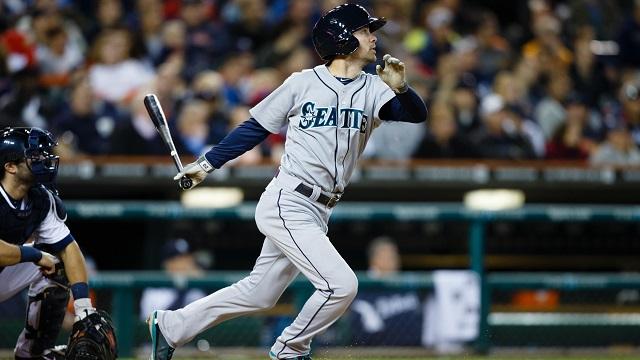 There are numerous reasons for any team to want Franklin as a part of their infield both now and in the coming years.  The pedigree is certainly there, as the 23 year old was drafted as the 27th overall selection in the 2009 MLB draft and has consistently been on Top 100 prospect lists since 2011.  Couple that with the ability to play both 2B and SS, switch hit, and hit for power, and it's easy to see why Franklin is the top position prospect trading chip in the Mariners system as the July 31st trade deadline approaches.  Franklin struggled in his quick 52 PA stint in the majors in 2014, but he's continued to rake in Tacoma, and has an .824 OPS with 20 HR in 166 career games at the Triple-A level.

The clear stumbling block to any potential deal between Oakland and Seattle is that they are division rivals in the AL West and both clearly in playoff contention in 2014, and it's hard to imagine either wanting to make a deal to improve their opponent with that much on the line this season.  Even including a third team in a potential deal to facilitate one of the larger proposals connected to Seattle would be hard to fathom from the Athletics' perspective, as swapping parts for Franklin to be included in a deal for David Price or Ben Zobrist wouldn't seem prudent with playoff implications on the line.