Angels 2014 Season: How did they become so good?

Share All sharing options for: Angels 2014 Season: How did they become so good?

Few teams can claim to have ever rivaled the Yankees' recent spending spree, but the Angels' series of moves in the offseasons heading into 2012 and 2013 come darn close. After signing Albert Pujols and C.J. Wilson to long-term contracts in December of 2011, GM Jerry Dipoto gave outfielder Josh Hamilton $123 million over five seasons one year later to complete a transaction trifecta for the ages, seemingly locking the Angels in as World Series contenders.

In the two seasons that followed the signings of Pujols and Wilson, the Angels went 167-157 and missed out on the playoffs both times. Pujols struggled through injuries while Wilson posted a 3.83 ERA in 2012, and the latter has a 1.37 career WHIP with the Angels. Meanwhile, Hamilton couldn't make consistent contact in 2013, posting the worst OPS of his career.

In 2014, the Angels are the best team in baseball, but those three big signings still haven't paid off. Pujols has been the best of the bunch, and his 26 homers and 91 RBI have helped the team tremendously given the overall lack of consistent power hitters in the lineup. But he's still nowhere near matching the production warranted by a $23 million salary, and that number will continue to rise until it tops out at $30 million in 2021—Pujols' age-41 season.

How, then, did the Angels become so good? The answer lies in a mix of homegrown talent and a few successful trades. Let's take a closer look.

Breakout performances in the rotation

Back in spring training, few people could have envisioned the Angels winning 89 of their first 144 games with Wilson posting a 4.64 ERA. The seeming lack of depth throughout the rest of the rotation made such a scenario impossible.

This is only the beginning.

Los Angeles, Oakland, and Seattle battle for West Coast supremacy. Who has put themselves in the best position to claim the division? We see a lot of action but few answers.

Or so we thought. But here we are in mid September, and the Angels have starters Matt Shoemaker, Hector Santiago and the injured Garrett Richards to thank for the rotation's success thus far, along with veteran right-hander Jered Weaver.

Just one year before, in August 2008, they signed Shoemaker as an amateur free agent out of Eastern Michigan University. After a few bumps in the road, he finally hit the majors in 2013 for a one-start cup of coffee, and after starting the 2014 season in Triple-A, he appears to be in the big leagues for good.

Richards put it all together this season after a few mediocre years switching between the rotation and bullpen. Though he won't pitch for the rest of the season after tearing the patellar tendon in his left knee, Richards still ranks eighth in the majors with a 2.61 ERA. Only four starters—Clayton Kerhsaw, Johnny Cueto and Felix Hernandez—have held opponents to a lower batting average, and nobody has allowed home runs at a lower rate than the five Richards allowed in 168.2 innings.

Shoemaker has done everything possible to shoulder the load in Richards' absence, and it has shown in the win column. The Angels haven't lost a Shoemaker start since Aug. 6, a span of five outings, and the team has lost only four of his starts all season. The Angels right-hander had also walked just six batters since July 3 before his recent start on Friday, and his gaudy 4.88 K/BB ratio—coupled with a 14-4 record and 3.25 ERA—would have him in contention for the AL Rookie of the Year award if Jose Abreu wasn't around. 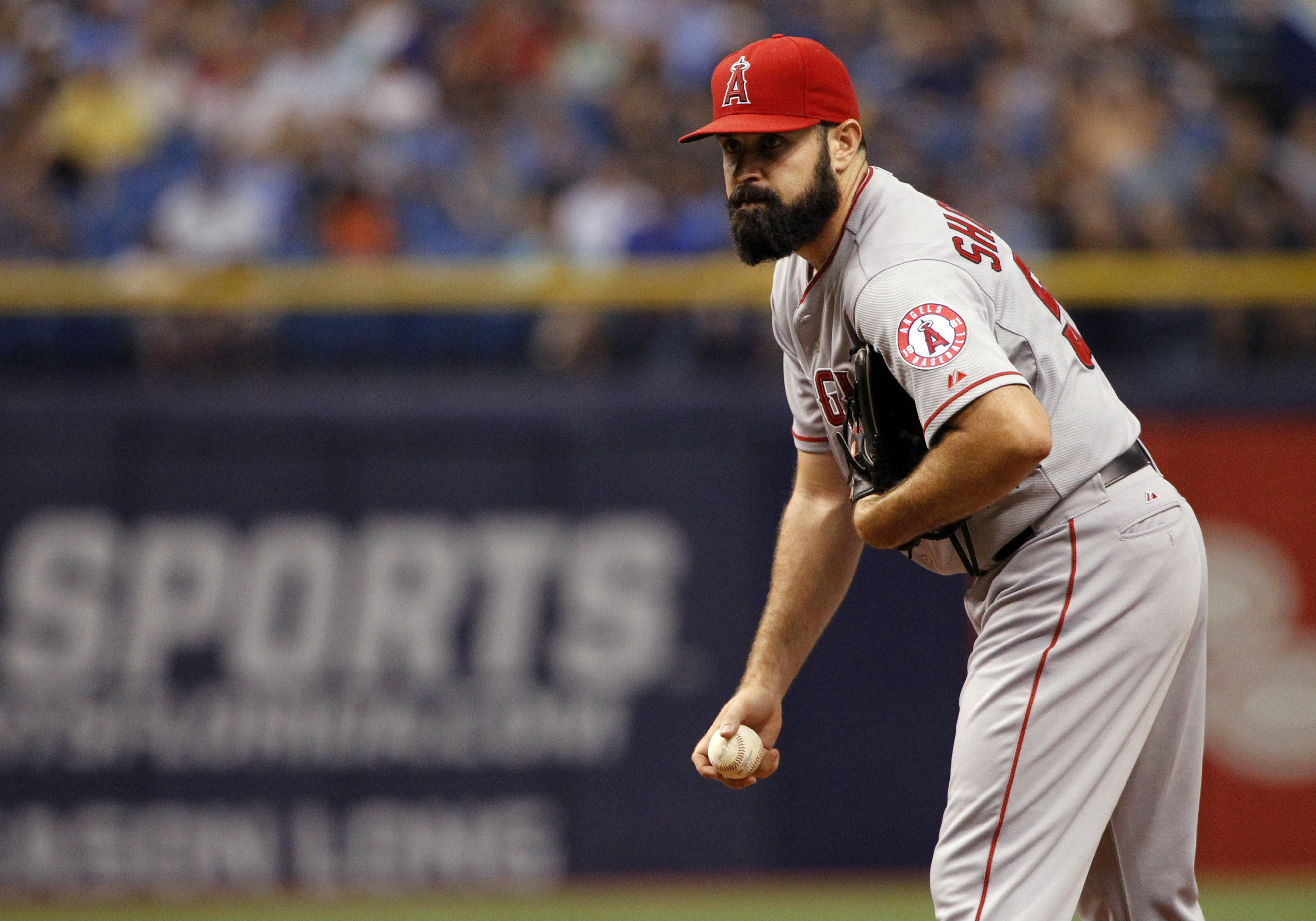 "When G went down we all knew we were all going to pick each other up," Shoemaker said in reference to Richards, via the LA Times' Helene Elliott. "We were going to pick it up for us, pick it up for him. That's a testament to such a good group of guys that we have. We're able to do that and rally around each other and keep getting better."

Coming into 2014, Shoemaker had five innings of experience in the majors, and Richards had a negative WAR with a career ERA of 4.42.

But it's not just the young guns. As MLB.com's Richard Justice noted on Monday, Angels starters had allowed three runs or fewer in 25 of their last 28 games at the times, a run that's now at 27 in 30. That wouldn't be possible without Weaver, who has a league-leading 16 wins in 31 starts with a 3.58 ERA. Though his 4.27 FIP is concerning, that number has risen in four consecutive seasons, and the right hander has done nothing to show he's slowing down other than a few rough starts in July. In fact, he's working on a streak of four consecutive quality starts, and he's allowed more than three runs just twice since July 1.

The Angels lead the majors in runs, but nobody has been a true offensive star outside of Mike Trout. In fact, Albert Pujols is the only other regular with an OPS above .800, and his .801 mark is hardly what you'd expect from the second most productive player on the majors' best offensive team.

That, however, is a testament to how reliable the lineup is from top to bottom. Every member of the order not named David Freese has an OPS+ above 100, and the Angels third baseman isn't far off with a total of 98. By that metric, eight of the nine regulars have been "above average" this season, and their average OPS+ total is 122, or 22 percent better than the league average. Fangraphs' similar stat, wRC+ (Weighted Runs Created, adjusted for ballpark effects), says even Freese is "average."

More on the Angels

In 1998, the Yankees had a similarly deep team. Like the 2014 Angels, eight of the nine regulars in the lineup posted OPS+ totals above 100. The Yankees also had an outlier—center fielder Bernie Williams—who finished with an OPS+ significantly higher than anyone else's (160), not unlike the Angels and Trout (163 OPS+). In 2013, the Red Sox also had eight of their nine regulars with OPS+ totals above 100, and David Ortiz (160 OPS+) served as the "outlier."

Of course, that Yankees team had several advantages over the 2014 Angels, including much more speed and a deeper bench; that's why they won 14 more games than the Angels' current pace of 100 wins. But the two teams have a few interesting parallels, and if we've learned anything from recent championship squads, it's that production up and down the lineup is much more important than having a stacked middle of the order without much else.

For all the publicity given to the Angels' offseason signings, it's the team's drafting success that has turned the lineup into such a juggernaut.

Howie Kendrick, Kole Calhoun and C.J. Cron? All products of the draft. Kendrick, a career .292 hitter who consistenly hits in the middle of the Angels lineup, was a steal in the 10th round, while Calhoun, the leadoff hitter, came in the eighth round of the 2010 draft.

But smart trades have been almost as important for the Angels, like the one that brought over catcher Chris Iannetta from the Rockies in 2011. Often hitting out of the ninth spot in the lineup, Iannetta is the only player on the team with a higher on-base percentage than Trout (remember that depth?), and FanGraphs consistently gives him positive defensive ratings.

Other key players, like Freese and outfielder Collin Cowgill, also came to the Angels by way of trades, though the latter has slowed down considerably after he was hit in the face by a pitch in mid July and went on the DL. Freese, who struggled through an abysmal first half, has raised his OPS by 36 points post All-Star break. He has eight hits in his previous 21 at-bats.

It all looked lost for the Angels after a disastrous 2013 season. But the team's smart moves have been more than enough to offset the struggles of players like Hamilton and Wilson, and if those two ever begin to play up to their salaries, the Angels will be a tough team to beat this October.