MLB's best contracts: 10 deals that seem too good to be true

Dollar for dollar, these contracts provide the best value in the game.

Share All sharing options for: MLB's best contracts: 10 deals that seem too good to be true

Team control has never been more important than it is in today's baseball world, with players like B.J. Upton, John Danks and Andre Ethier earning yearly salaries in the ballpark of $15 million—or more. Teams on the lower end of the payroll spectrum often lose their best talent to big-market teams when those players are in their prime years, even with arbitration and other conditions designed to prevent that very thing from happening.

As playoff season roles around again, we're seeing once again how important it is for teams to lock up their very best talent while it's still early. Waiting until the last minute—like before a player is about to hit free agency—just isn't feasible with the contracts players on the market receive these days.

It especially pays to sign players through their arbitration years. Yes, doing so helps to eliminate the stress and bad blood that the process creates, but removing arbitration from the equation can also save teams money, especially in the long run.

Here, we'll take a look at some of the league's most valuable contracts. This list won't consider players who haven't hit free agency yet, unless the player has already signed a contract extension. For example, while Josh Donaldson's $500K salary in 2014 is a huge bargain, he isn't even arbitration eligible yet. The list will take into account the player's value to his team, the price and length of the contract, how old the player will be when the contract expires and how well the player has performed during the first years of the contract, among other variables.

Goldschmidt fractured his left hand and only played in 109 games this season, but his contract with the Diamondbacks is such a bargain that he probably exceeded his value anyway.

In 2014, Goldschmidt made $1.1 million, and the D-Backs only owe him about $29 million over his remaining four seasons. That's incredible value for a player who finished second in the NL MVP voting last year and was expected to contend again in 2014 before his season was cut short.

Goldy's contract also includes a $14.5 million team option for 2019, which takes care of his second year of free agency after he's guaranteed to make $11.1 million in his first. CBS Sports' Jon Heyman reported at the time of the deal that an agent said Goldschmidt might have left $75 million on the table, but the D-Backs slugger wasn't worried, calling the done deal "one less thing to worry about."

"Like I said, I'm happy," Goldschmidt told Heyman at the time. "You can't look back six weeks later and change your mind. Whatever happens, I made the decision I wanted to make. Hopefully, it works out."

For just under $6 million a season, the Giants have control over one of the game's best pitchers for at least the next three seasons, and they'll have the option of keeping him around through the end of 2019 for $12 million annually over the final two years. (The 2018 option automatically kicks in if Bumgarner reaches 200 innings in 2017 or 400 between 2016 and 2017.)

These late-season acquisitions, on paper, and on the Internet, and on the lineup cards of major league managers, seemingly have little to do with the MLB playoffs, but could, in the randomness of autumnal baseball, have a big playoff moment.

The Giants left-hander has been a model of consistency since his first full season in 2011. In the four seasons following his eight shutout innings in the 2010 World Series, Bumgarner's highest single-season ERA is 3.37, and after striking out over 190 batters in three straight seasons, his next strikeout will put him at 200 for the first time. He's also working on a third consecutive season with a WHIP of 1.11 or lower, and he's gone seven or more innings in exactly half of his 30 starts.

Bumgarner's durability is also a huge plus given the extreme risk of signing pitchers to long-term deals. He's almost a lock for 30 starts each season, and the lack of an injury history speaks well for the left-hander. Bumgarner does throw a lot of sliders (266 more sliders than fastballs this season, per FanGraphs), which puts stress on his arm, but he's also well-built (6'5"/235), making that slightly less of a concern.

Continuing with the stats parade, only 13 pitchers have a higher WAR than Bumgarner since the beginning of 2011, and nine have a better FIP. The left-hander also has the sixth-most wins, eighth-most starts and innings, 13th-best WHIP and eighth-most strikeouts over that span. Since the start of 2012, only Clayton Kershaw, Yu Darvish, Gio Gonzalez and Johnny Cueto have held opponents to a lower batting average. This season, he has the 10th-best K/BB ratio in the majors.

Madison Bumgarner is making $3.75 million this season. He doesn't reach eight figures until 2017. Yes, it's hard to believe.

Doolittle hasn't pitched since Aug. 23, when he injured his ribcage, but the A's are expected to activate him on Friday for some much-needed help during the stretch run.

Even if he didn't play for the rest of the season, Dootlittle would have earned his $505K salary this year—and then some. The A's lefty has turned himself into one of the premier relievers in the majors, posting a 0.705 WHIP along with a 2.28 ERA, both career bests. He also made a seamless transition to the closer role after coming into the season with just three career saves.

The A's can potentially control Doolittle through the end of 2020 after signing him to a bargain contract extension earlier this season. He's guaranteed $9.37 million through 2018 starting next season, and the A's have a pair of options for the two following years for $6 million and $6.5 million, respectively. For a team that sometimes struggles to keep its top talent, this extension is a huge win, especially because it goes into Doolittle's free agency years.

Puig might be in the midst of the worst slump of his young career, but he'll be the biggest steal in the majors (in terms of monetary value) if he can revert to his previous level of production.

At the time the Dodgers signed Puig to a $42 million deal over six seasons, the move represented a huge risk. In a way, it still does. But Puig never makes eight figures throughout his contract, and he has the potential to be among the top players in the game when he's at his very best. (Despite his recent struggles, the Dodgers outfielder is still a .304 career hitter with an .887 OPS in 235 games.) It's also important to remember that Puig hasn't been in the league for too long yet, so he might still be adjusting—even with his experience in Cuba.

After his contract expires, Puig has a year of arbitration left, which means he'll be a Dodger at least through the end of 2018 if the club still wants him around. In a roll of the dice, the Dodgers gained control of one of the game's most talented players for a premium price. 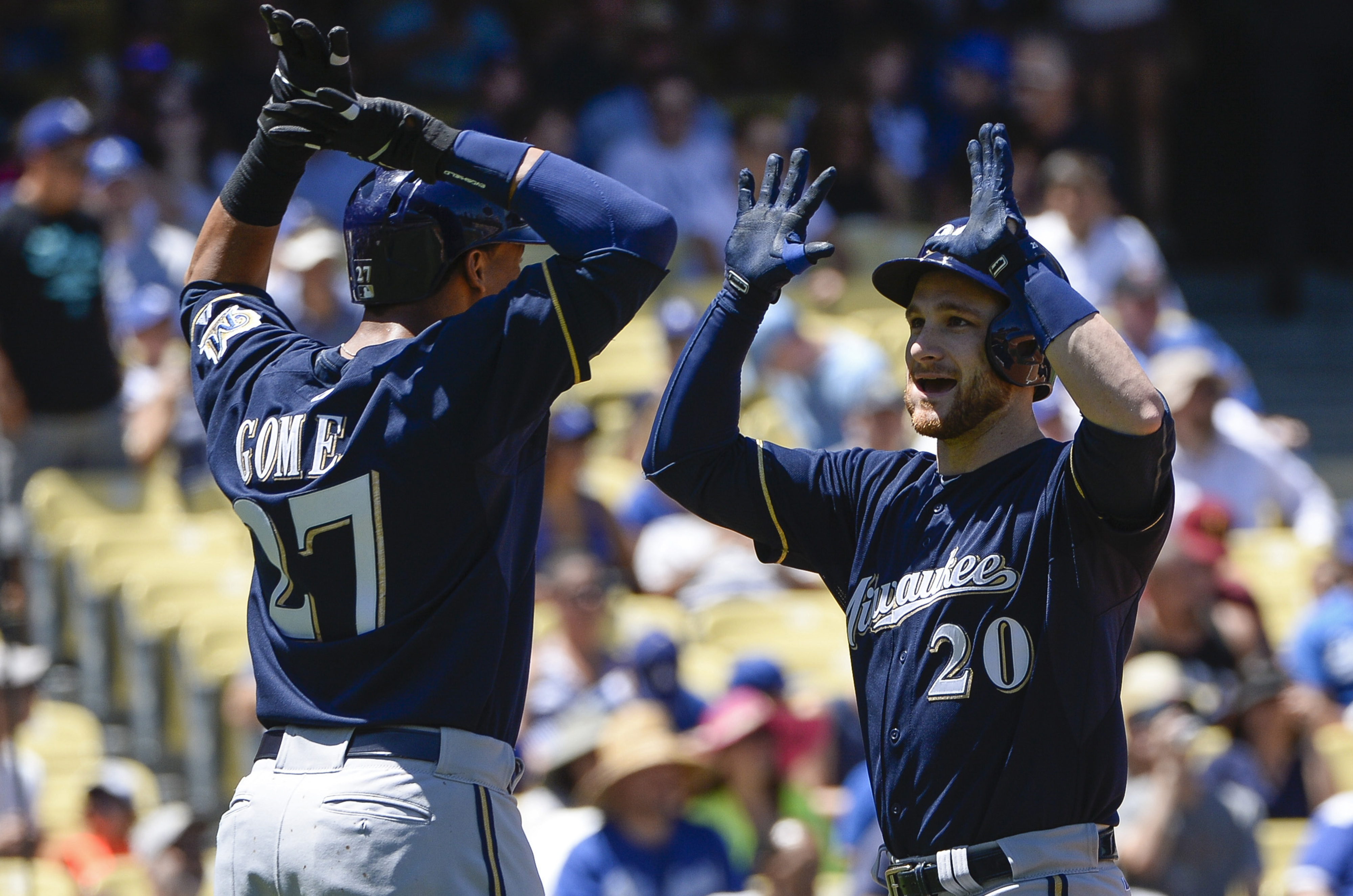 Gomez and Lucroy...they're gr-r-reat! And so are their contracts. (Robert Hanashiro-USA TODAY Sports)

Offensively and defensively, Gomez is the total package. He hits for power, reaches base consistently and covers center field well—though not at the same level as last year, as the zone rating stats say.

Still, consistency over the past three seasons defines Gomez. He has 64 homers in that span but has never hit 25. He'll reach 90 runs for the first time in his career this season, but scored 152 over the last two seasons despite limited playing time. His 129 OPS+ is a replica of the same total he posted last year, and he has already reached the 30-steal plateau—the third straight year he's done so. Luckily for the Brewers, Gomez makes only $7 million this season, after making just over $6.25 million total between 2012 and 2013. He's also under contract for $8 million and $9 million in 2015 and 2016, respectively.

Meanwhile, Milwaukee has Lucroy locked up through his first season of free agency (if they pick up his option of $5.25 million in 2017), and the team only owes him $7 million total in 2015-216 after paying him $2 million this year.

Even though he's cooled off since his MVP-like start, Lucroy is still hitting .300/.366/.475 with a league-leading 49 doubles. He has also received lots of attention for his defensive ability, especially when it comes to receiving pitches behind the dish. It's always a plus for the pitching staff to have the same catcher around for an extended period of time, especially one like Lucroy.

Like Bumgarner, Sale is signed with his team through the end of 2017, with the chance of staying for as late as 2019. Barring injury, it's hard to imagine the White Sox declining those options.

Sale's ERA, ERA+ and FIP all lead the American League, which means he's been the best pitcher in the league by just about every metric that measures run prevention. He has also seen his K/BB ratio rise for the third straight season. Somehow, Sale is only getting better.

Injuries kept Cueto under the radar more than he should have been heading into 2014, but he's no secret anymore. With a fourth straight sub-three ERA, Cueto has established himself as one of the game's most consistent performers, as long as he's healthy.

The unfortunate part of Cueto's current deal is that he's only signed through the end of 2015. The Reds have a $10 million option for next season that they'll surely pick up, a salary that matches exactly what Cueto is making in 2014, but he'll hit the market after that. And yet, though he made just 68 starts from 2011 to 2013, the right-hander earned only $16.2 million combined during those three seasons, while throwing a total of 433.2 innings. The only mistake the Reds made here was not giving Cueto a longer deal.

For the Astros to fulfill Sports Illustrated's "prophecy" of winning the 2017 World Series, the team will certainly need its second baseman. Altuve will indeed remain an Astro through at least the end of the 2017 season, and he'll make only $10.5 million over the three upcoming seasons combined. That's after the Astros paid him $1.25 million this season to notch 200 hits (and counting), steal 52 bags and lead the majors in batting average.

But even if the 2017 championship goal proves too unrealistic, Altuve has team options for 2018 and 2019, for $6 million and $6.5 million, respectively. The deal knocks out Altuve's arbitration years, when he almost certainly would have made more than he's owed, along with his first year of free agency.

McCutchen's deal with the Pirates just might be the biggest bargain in baseball. If the Pirates outfielder wins his second consecutive MVP award this season (a longshot but still a possibility, as he leads the NL in OPS+), he'll have made just under $12 million over the two seasons combined. For some perspective, Ryan Howard and Prince Fielder make more than double that total this season alone.

The best part of the deal, however, is that McCutchen will remain a Pirate through at least the end of 2017, with a $14.75 million option for 2018. During the next three years, he'll make a combined $37 million, or $5 million more than Josh Hamilton is due to make in both 2016 and 2017. McCutchen is more than worth the money; only Mike Trout has been a more valuable position player than the Pirates center fielder since the beginning of 2011, in terms of WAR.

The Pirates struck gold with this deal, showing the value of early long-term contracts. With deals like that, both sides win. The team locks up its player for cheaper than it ordinarily would, while the player receives guaranteed millions and has peace of mind about his contract situation. Plus, players like McCutchen can always cash in on Pujols- or Cano-esque deals when the initial contracts expire. It's a win-win.