With a lot of money on the line, Scherzer came through again in 2014. Now he'll make even more while getting to pick where he wants to go.

Max Scherzer made a $144 million gamble in March by turning down the Tigers' offer of a six-year extension, and it appears that the risky move paid off.

The offer, which came on the heels of Scherzer's nearly immaculate 2013 Cy Young award-winning season, would have been among the 25 most lucrative deals in the history of the sport. It also would have given the right-hander $24 million annually through the end of 2020, a season during which he'd turn 36 years old.

But the risk turned out to be a good one. Scherzer put together another fine season in 2014, and if he stays healthy during his remaining two starts (and through the playoffs if the Tigers make it), he'll enter the open market and find himself with a host of teams to choose from.

Let's look at how Scherzer got to where he is now, then try to figure out where he'll end up this winter.

Scherzer has always had the stuff to be a breakout pitcher, and now he's learning how to use that deadly repertoire the right way. He complements his fastball, slider and cutter with a deadly changeup, his secondary pitch against which hitters are batting .209—a pitch he used much less frequently and to far worse results when he broke into the league.

The tall righty's stock has gone up in 2014. What market can he expect this offseason?

Scherzer began his career with the Diamondbacks after they took him 11th overall in the 2006 draft, and he quickly made his way up to the majors after just a season and a half in the minors. His first full season came in 2009, when he made 30 starts for the DBacks but struggled with his command, allowing 20 homers in 170.1 innings while walking 3.3 batters per nine. But Scherzer still struck out more batters than innings pitched, showing the stuff that would ultimately lead him to a Cy Young award four years down the road.

After the season ended, Scherzer was traded to Detroit in December as part of a blockbuster three-way deal that also sent Austin Jackson to the Tigers and Curtis Granderson to the Yankees. In Detroit, he established himself as one of the league's best pitchers, though not before another bump in the road.

The home run bug came back to bite Scherzer again in 2011, when he posted a career-worst 4.43 ERA along with 29 homers and 9.6 hits allowed per nine innings. But he lowered his ERA by 69 points the following year while leading the league with an 11.1 K/9 rate, then put together a 21-3 record with a 0.97 WHIP on his way to the AL Cy Young award. That was what led to the $144 million offer, and it was Scherzer's confidence in his abilities (and his agent, Scott Boras) that prompted him to turn it down.

Where he is now

As it turned out, that confidence was well placed. Though he hasn't quite matched his 2013 performance, Scherzer has reached 16 wins for the third straight season, and his 3.26 ERA through 31 starts is the second-best mark of his career. He's also remained consistent in other areas, like his strikeout total—10.4 per nine, an improvement from last season. He has also proven to be capable of eating up innings, with a total of 207.1 that puts him seventh-best in the majors.

Scherzer has a few important points working in his favor as he enters free agency. For one, he has spent the last five seasons (just over 80 percent of his career innings) with the Tigers, who play in a very favorable ballpark but also consistently face the best offenses in the majors. By my count, 13 of Scherzer's 31 starts this season have come against teams in the top 10 in runs scored, including two dominant starts against the top-scoring Angels.

Though he's been mediocre (for his standards) outside of Comerica Park this season (3.70 ERA), Scherzer's career road ERA is still reasonable—only 26 points higher than it is at home. He's also had a bit of bad luck on the road in 2014, with an opponent BABIP that's 57 points higher away from Comerica. 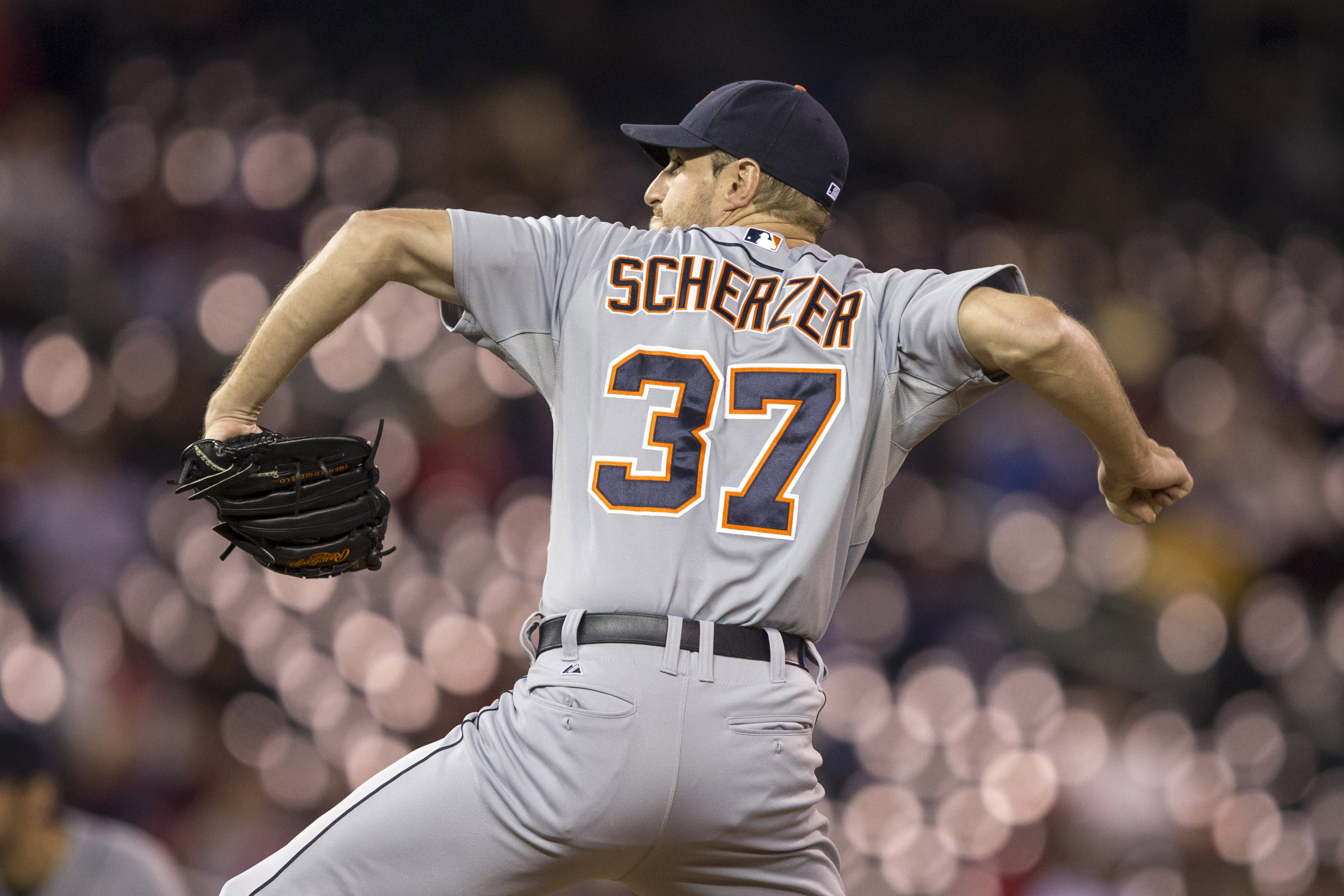 Point being, Scherzer's stats aren't inflated all that much by the expanses of the Tigers' ballpark, and he'll almost certainly improve statistically if he moves to the National League.

Scherzer is also battle-tested. He has made multiple postseason starts in each of the last three seasons, with 11 total appearances (nine starts) and a 3.42 ERA—including 13.1 strong innings against the Red Sox in last year's ALCS, in which he struck out 21 batters and allowed six hits. You just can't buy successful experience in October...unless that experience comes in the form of a pitcher on the market, like Scherzer.

It's fair to say that the Tigers won't be re-signing Scherzer. They already offered him that huge extension during spring training, and the $144 million figure would have been higher if the team was willing to give Scherzer more money. Clearly, that's not the case, and with the Tigers' big extension to Justin Verlander already looking like a potential costly mistake, GM Dave Dombrowski might be hesitant to give Scherzer a similar deal.

From veteran starting pitchers regressing to top prospects disappointing, it took a lot for the 2014 Red Sox to fall to last place.

Bad contracts could cost these teams the playoffs

As the money goes up, the playoff odds go down: at least for these three playoff-hopefuls strapped with big contracts.

The parallels between the two are uncanny. Coming off back-to-back dominant seasons (including an MVP and Cy Young campaign), Verlander signed his extension just before the 2013 season and is locked up through at least 2019 with a vesting option for 2020, his age-37 season. This offseason, Scherzer will also be coming off two phenomenal seasons (including a Cy Young award) and will sign a deal that will likely take him through to his late 30s.

Even so, Boras mentioned back in July that Scherzer would be open to a return to Detroit.

"None of that has changed as far as us listening to anything Detroit may have to say when the season ends," Boras said, according to mlive.com's James Schmehl. But the Tigers' willingness to make an improved offer has always been a bigger question mark than Scherzer's willingness to listen, and the team has plenty of needs to address outside of starting pitching—like an outfield that's 18th in WAR this season thanks to Austin Jackson's departure.

Needless to say, Scherzer will be in extremely high demand assuming he hits the open market, and he'll probably end up with one of the big-market teams in need of rotation help.

But the Cubs, a team that doesn't fall under the category of "big market," could still be a major contender for Scherzer. They've made it clear they're looking for some pitching on the market to complement an army of hitting prospects that projects to form one of the league's best lineups in a few seasons.

The Cubs also have some payroll flexibility, despite their smaller budget, thanks to a lot of very favorable contracts for the hitters who will form the core of the team over the next several seasons. That has led to a ton of buzz around the Cubs' supposed interest in Jon Lester, who will join Scherzer as one of the top pitchers on the market this offseason. But if Lester returns to Boston, Scherzer would be a nice consolation prize.

"Because we have so many young players who are going to be cost-controlled over the next several seasons, we have tremendous flexibility built into our roster as it is," said Cubs President Theo Epstein, via CSN Chicago's Patrick Mooney (link above). "We’re going to field a pretty good nucleus with a very low payroll associated with that. That in and of itself – and some of the savings that we’ve made over the last offseason for example – will allow us the flexibility we need to be very aggressive should the right player or players present themselves to us."

We know Scherzer wants to get paid. He wouldn't have put $144 million on the line if he didn't think he could earn more, and his follow-up to last season means he has earned more. Meanwhile, the Cubs are willing to be aggressive this offseason, because they know they'll need someone to build a rotation around, and they're willing to shell out the big bucks to get it done.

But the Cardinals want to stay on top in the Central, and they might try to lure Scherzer back to his hometown to do that. The right-hander was born in St. Louis, attended high school in Chesterfield (less than half an hour away), then went to the University of Missouri in Columbia.

He also likes the idea of pitching in St. Louis.

"It would be too cool," Scherzer said, via the St. Louis Post-Dispatch's Rick Hummel back in March. "I grew up there. When you’re a little kid, you picture yourself putting on the (Cardinals) uniform."

For what it's worth, the fans also impressed Scherzer when they cheered for him after his spring training start against the Cardinals.

"That meant a lot to me," Scherzer said. "That just shows how good the fans are. For them to applaud for me, I take that as a huge sign of respect."

The Red Sox are another team that figures to be heavily involved in the feeding frenzy for the market's three big pitchers—Scherzer, Lester and James Shields—and why not Scherzer? The Sox saw what he could do when he pitched against them in the ALCS last season, and with a rotation in shambles and a huge payroll just waiting to be expended on a big free agent pitcher, Scherzer would be an ideal fit.

Sox chairman Tom Werner told ESPN Boston that the team has "a lot of money to spend" and that the Sox are "determined to go into the free-agent market and improve the team." If Lester doesn't make it back and the team has to pick between Scherzer and Shields, they might take the younger option (Scherzer is 30, Shields is 32)—and they'll have the cash to spend.

You'll hear just about every team in baseball linked to Scherzer one way or another as the excitement builds. ESPN's Jim Bowden wrote a column (subscription required) in August listing ways in which the Rockies could make themselves contenders, and sure enough, signing Scherzer was on the list. CBS Chicago's Bruce Levine wrote an article just over a week ago in which GM Rick Hahn said the Sox "need to be aggressive this offseason" and that "there will be a fair amount of room" on the team's 2015 payroll. The message, as the headline stated, was "don't rule out high-profile free agents," and Scherzer's name came up in the article.

Both are possible destinations, but in reality, neither team figures to have the money or immediate potential to contend that other teams will be able to offer Scherzer. Even the Red Sox, who will likely finish the season in the AL East cellar, could contend for the division in 2015 with a few big moves and the chips falling their way next year. We'll have to wait to find out, but as it stands right now, the Cubs and Red Sox have the most obvious need for pitching combined with the payroll flexibility to make a big-time acquisition realistic. The Cardinals, who play in Scherzer's hometown, aren't far behind.