Has Brian Sabean done it again?

Share All sharing options for: Giants' less-heralded moves give team chance for repeat of postseason success

It's very easy to overhype teams on hot streaks. When the Miami Marlins and Tampa Bay Rays each had good stretches earlier this season, some were quick to label them as contenders; both teams are now under .500.

The San Francisco Giants, whose loss on Monday ended a six-game winning streak, have been through their fair share of ups and downs this year. The team's recent success—12 wins in 17 games dating back to August 16—might appear fluky given the Giants' struggles during the previous two months. (San Francisco went on a 21-37 run from June 9 to August 15.)

But exceptional performances from recently acquired players have revitalized Bruce Bochy's squad, which now has the look of the team that had the best record in baseball back in early June. Some expert wheeling and dealing from general manager Brian Sabean, who is as good as any GM at making something out of nothing, has the Giants set up to make a run in the postseason—assuming they get there. In fact, it's quite possible that no GM is more directly responsible for his team's success than Sabean.

The acquisition of second baseman Marco Scutaro in 2012 is perhaps the best model of Sabean's uncanny ability. In exchange for then-minor leaguer Charlie Culberson, who is hitting .193 for the Rockies this season, Sabean traded for Scutaro (and cash!) on July 27, 2012, then watched his new second baseman hit .362 during the regular season, win the NLCS MVP and record the World Series-winning hit.

This season, the Giants GM has done more of the same.

It starts with right-hander Jake Peavy, who the Giants brought over near the non-waiver trade deadline. Filling in for an injured Matt Cain, Peavy has a 2.66 ERA in seven starts with the Giants, and he has twice come within eight outs or fewer of pitching a no-hitter.

Peavy had a tough time in the AL East, posting a 4.72 ERA with one win in 20 starts for the Red Sox, but a return to his native NL West has given the right-hander a fresh start. Peavy won the Cy Young award in 2007 with the Padres and posted an overall 3.29 ERA in eight seasons with San Diego from 2002-2009. His veteran presence will go a long way for a Giants team that already had plenty of experience, both in the regular season and postseason.

Then there's Hunter Strickland, a hard-throwing right-hander who is being heralded as the second coming of Brian Wilson, minus the beard and other crazy antics.

Claimed off waivers from the Pirates in 2013, Strickland has more than recovered from the Tommy John surgery he underwent in May of that year. After less than 11 months of recovery time, Strickland was assigned to Double-A Richmond and immediately picked up where he left off in 2013, when he posted a 0.86 ERA in 21 innings at High-A. 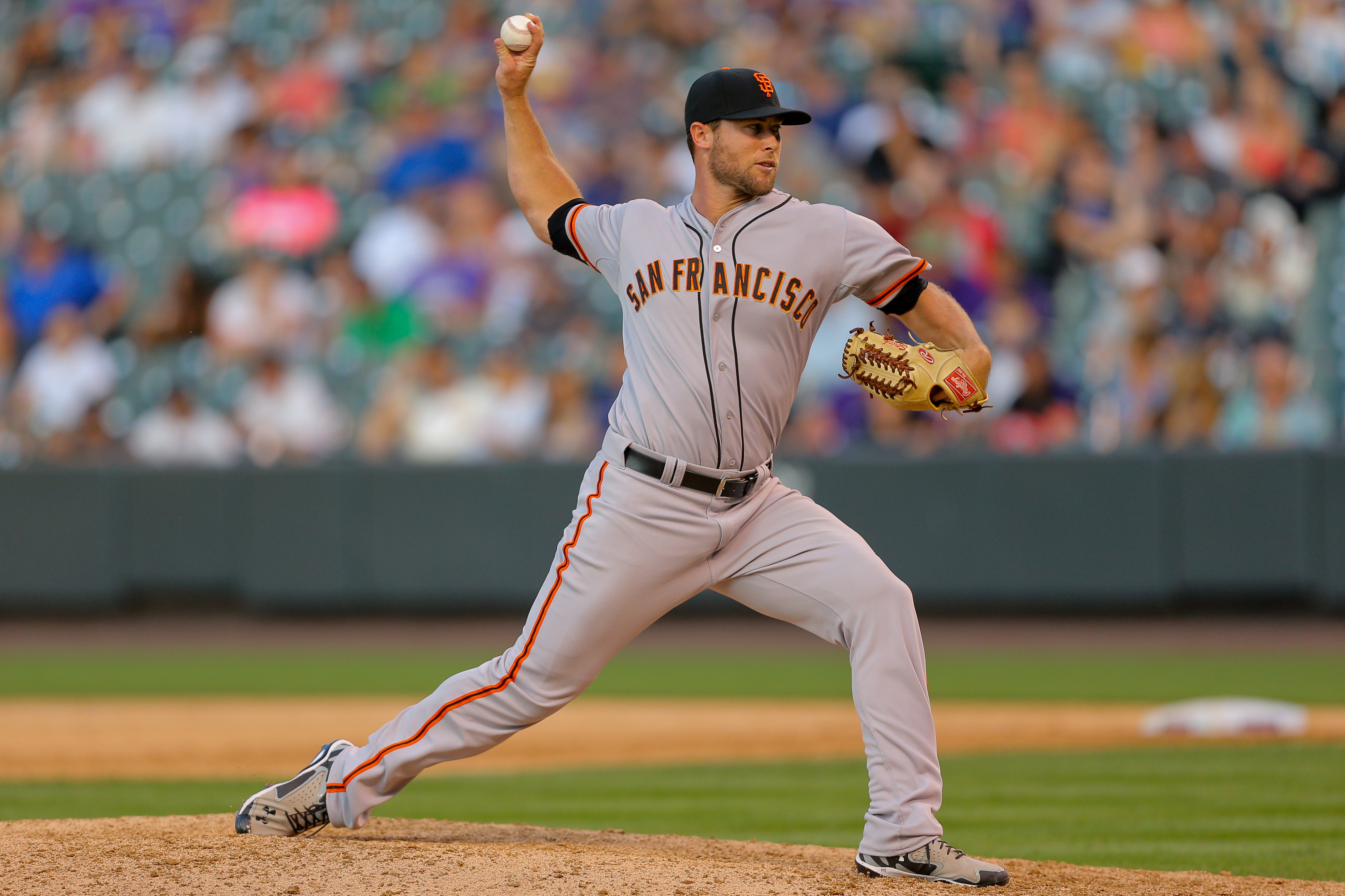 Strickland pitched a scoreless frame in his debut on Monday. Justin Edmonds/Getty Images

Through 38.2 innings in Richmond this season, Strickland and his 100 MPH heater dominated, with a 2.02 ERA and an outrageous 48-to-4 strikeout-to-walk ratio. The right-hander's ability to place a high-90s fastball where he wants it is what has Giants management and fans excited for Strickland's future in the majors.

In claiming Strickland, Sabean potentially saved his team upwards of $5 million in payroll, as the team can now possibly afford to let reliever Sergio Romo walk when he becomes a free agent after this season. That money can go toward re-signing players like Pablo Sandoval and/or Michael Morse.

Morse is another good example of Sabean's ability to get the most bang for his buck. Signed for $6 million in December, the Giants outfielder has rebounded from a tough 2013 campaign by hitting .280/.338/.477 with 16 homers. His 1.1 WAR is a bit misleading, too. Though he's an undeniable liability in the field (-23.2 UZR/150), Bochy has the luxury of inserting defensive whiz Gregor Blanco in left field in the later innings, mitigating Morse's below-average fielding considerably. If Morse can get healthy from his strained left oblique, the Giants will have one of the better outfields among contending teams.

With many players returning from the 2010 and 2012 World Series-winning squads, the team's experience in the postseason is a valuable weapon that few teams have to the same degree as the Giants. That's a testament to Sabean's commitment to re-signing his best players, including outfielder Hunter Pence, who signed a five-year extension this offseason.

In one of the most lopsided trades in recent memory, the Giants brought Pence over from the Phillies during the stretch run of the 2012 season. Sabean gave up outfielder Nate Schierholtz, who has a .537 OPS this season, and prospects Seth Rosin and Tommy Joseph. Rosin was demoted from Triple-A earlier this year and Joseph is in rookie ball after a series of concussions. Pence leads the majors in runs scored and is sixth in WAR, per FanGraphs.

But Sabean's wizardry can be found in other smart trades too, like the one that brought center fielder Angel Pagan over from the Mets in 2011 in exchange for right-handed reliever Ramon Ramirez (who has pitched one inning in the majors for Baltimore this season) and outfielder Andres Torres, who has just 95 plate appearances in the minors (and none in the majors) for the Red Sox this year.

In other words, Sabean acquired two-thirds of the Giants' starting outfield for five players who have had little to no impact in the majors since the trades. Torres even played in the Giants outfield last season alongside Pagan.

Other key players are homegrown and show the Giants' drafting ability. The team took catcher Buster Posey in the first round of the 2008 draft and locked him up last offseason with an extension through the end of 2022. Two-time Cy Young award winner Tim Lincecum and three-time All Star Matt Cain are also products of the amateur draft, though neither figures to make much of an impact this postseason. (Cain is out for the year and Lincecum has allowed 28 runs in his last 26.2 innings.) Breakout second baseman Joe Panik also came by way of the draft, as did shortstop Brandon Crawford.

The Giants are the anti-Yankees, countering the latter's strategy of signing aging free agents who command gigantic long-term contracts with a balanced approach of smart drafting, crafty trading and limited but calculated free agent signings.

In two out of the last four seasons, that has worked just fine. Now the Giants are looking to make it three out of five.