The idea of the New York Yankees trading away Derek Jeter before the 1996 season seems preposterous, given what we all know about his career and how the team fared in the late 90s and early 2000s, but bear with us here. "What if?" scenarios are easy to do with Out of the Park Baseball, so we used this year's game, OOTP 18, to see what might have happened had the Yankees lost their minds and traded away an iconic player as his career was getting underway.

Let's set the scene. We've created an historical replay in OOTP 18 and taken over the GM reins of the Yankees. Opening Day for the 1996 season is tomorrow, and we're perusing our prospects for the season. Then we consider young Mr. Jeter. 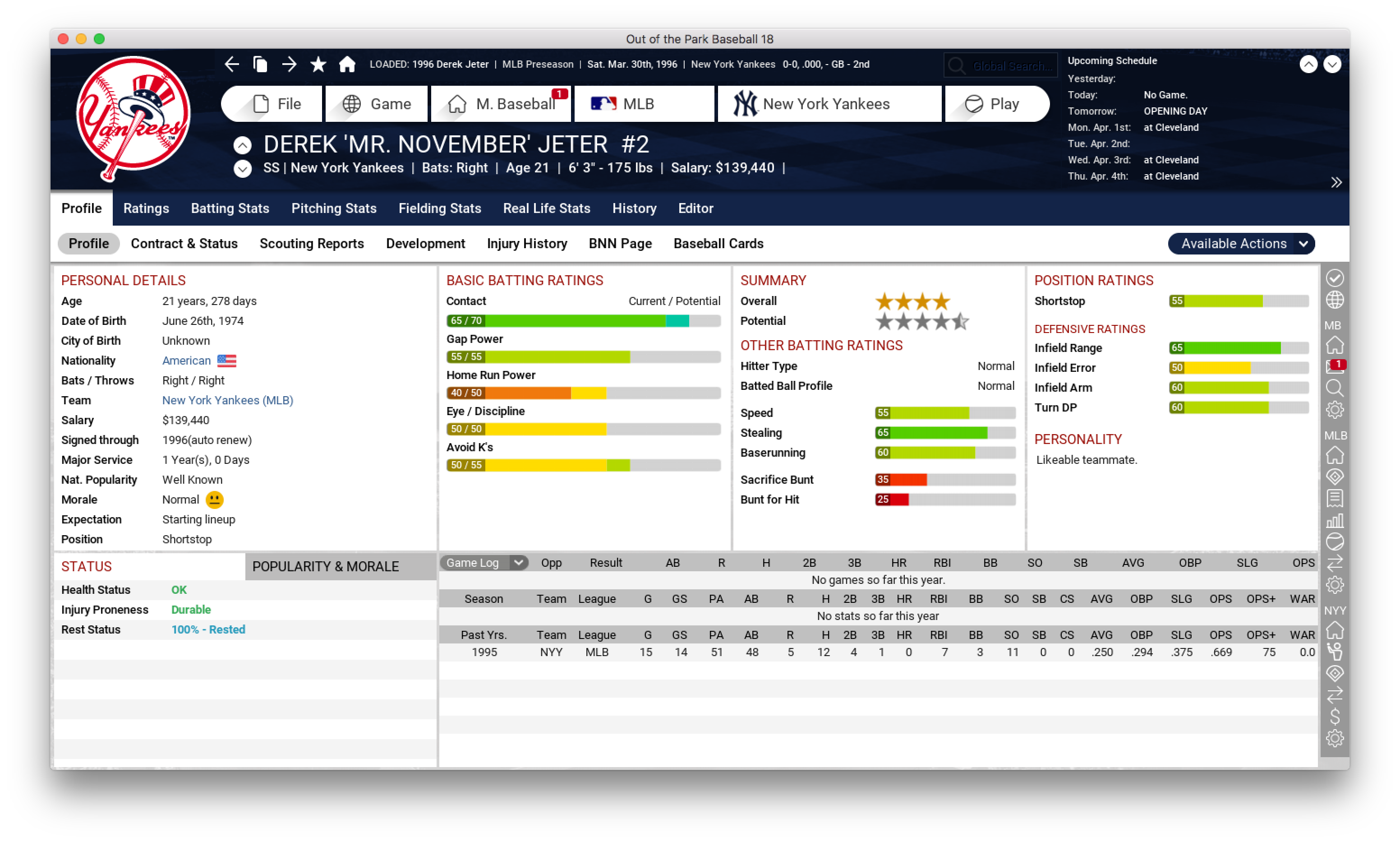 It was suggested to us that we try to trade young Jeter to the Pirates for starting pitcher Denny Neagle and a pair of prospects. While the Yankees weren't hurting for starting pitching at the start of the 1996 season, their staff was a bit on the older side, so Neagle could bring a little youth to the rotation. 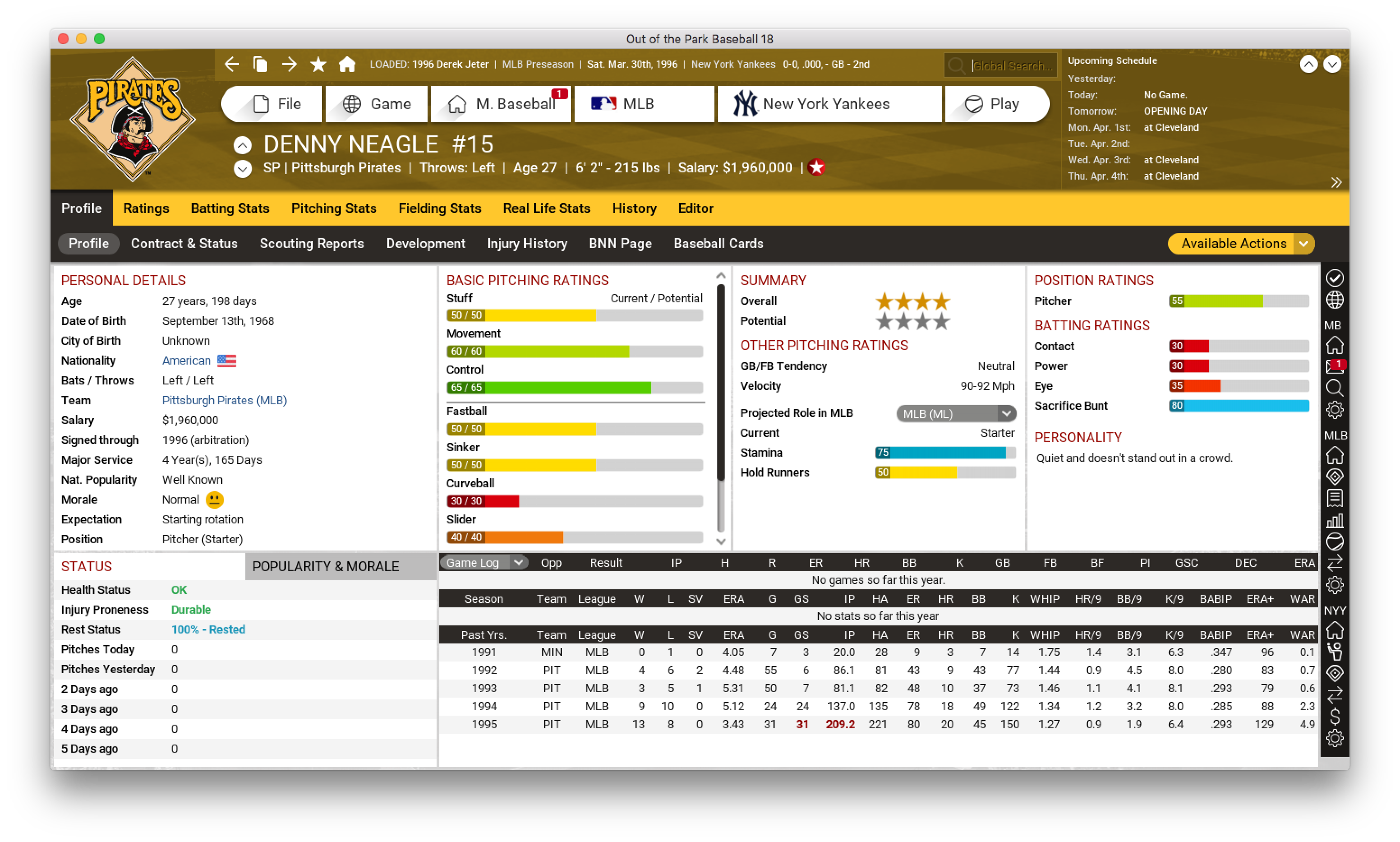 My assistant GM, Joe Grant, and I get the Pirates' GM on the horn to see what he thinks of this trade, straight up. (OOTP assigns you a fictional assistant GM who helps guide you through your decision-making.) 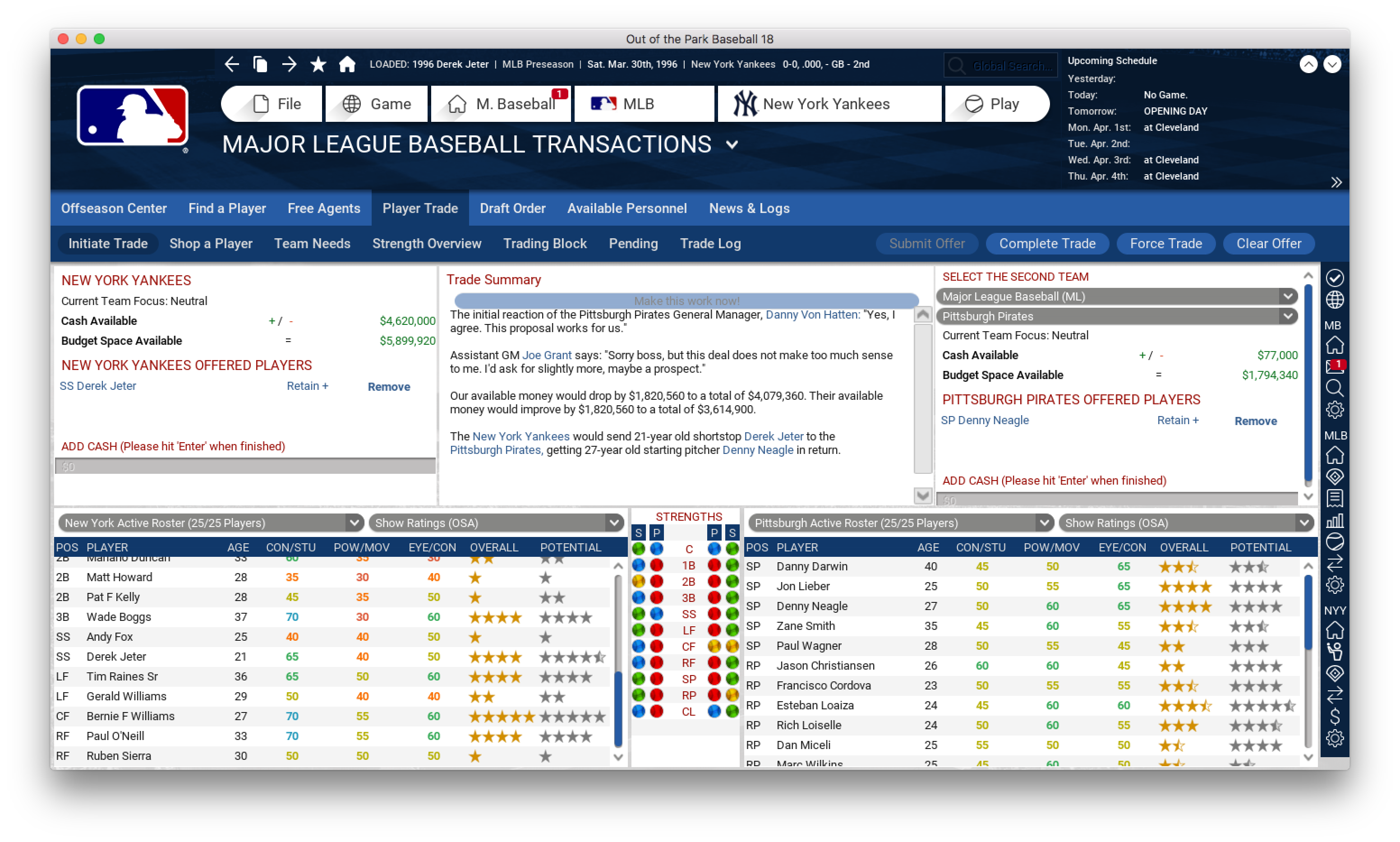 So the Pirates are ready to pull the trigger on the trade now, but Joe thinks we can squeeze something extra out of them. "Maybe a prospect," he helpfully suggests, so I peruse the other team's top minor leaguers. Hmmmm .... The Yankees' catchers are getting a bit old and Jason Kendall looks pretty good, so I add him to the deal. 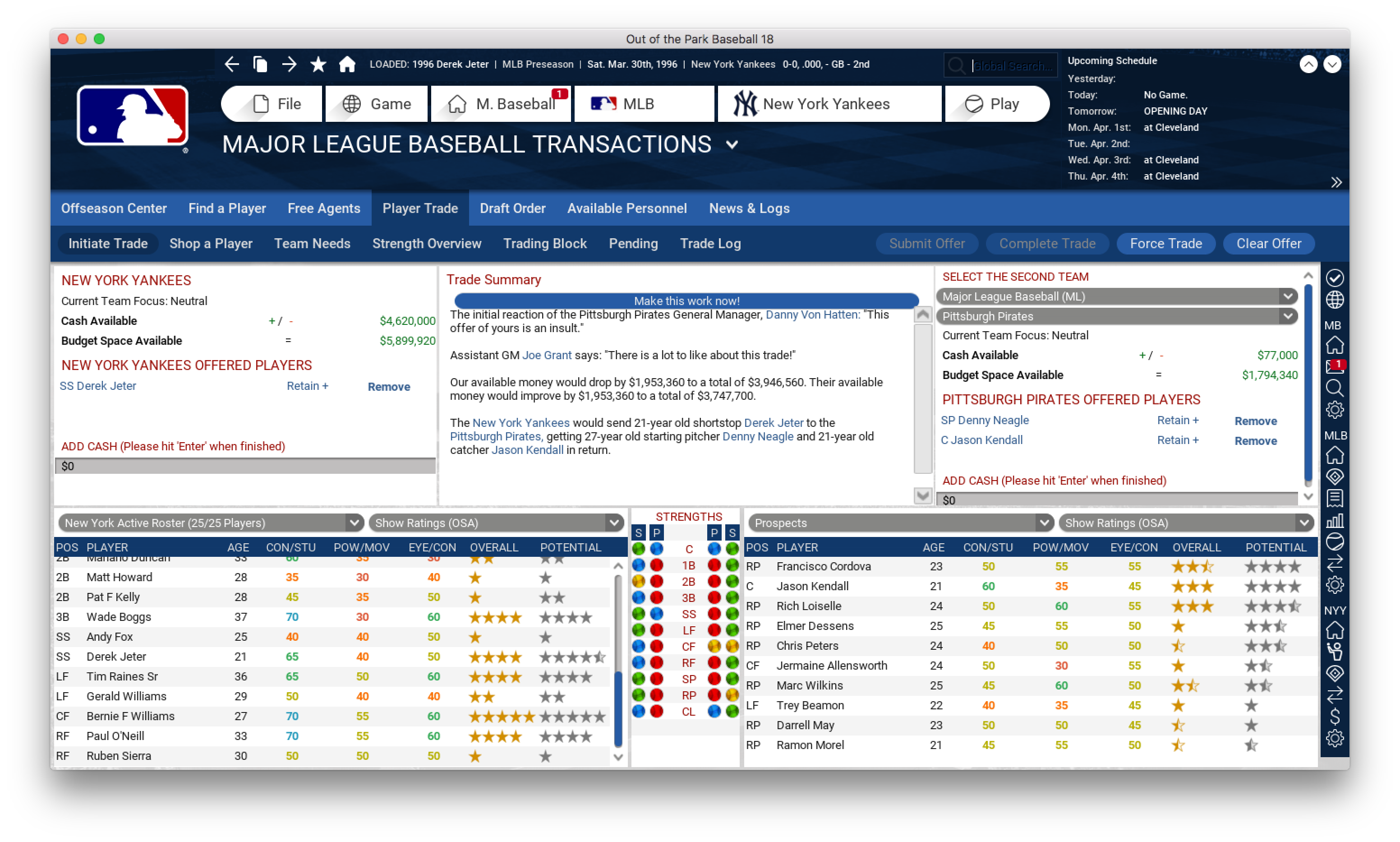 Yeah, that didn't go over so well. Luckily, my counterpart on the Pirates didn't hang up on us, so we try something else. Joe, bless his heart, really wants us to ask for even more.
I try adding a different prospect, relief pitcher Francisco Cordova, to the mix, and the Pirates seem ready to wrap this up now, while Joe is still egging me on. 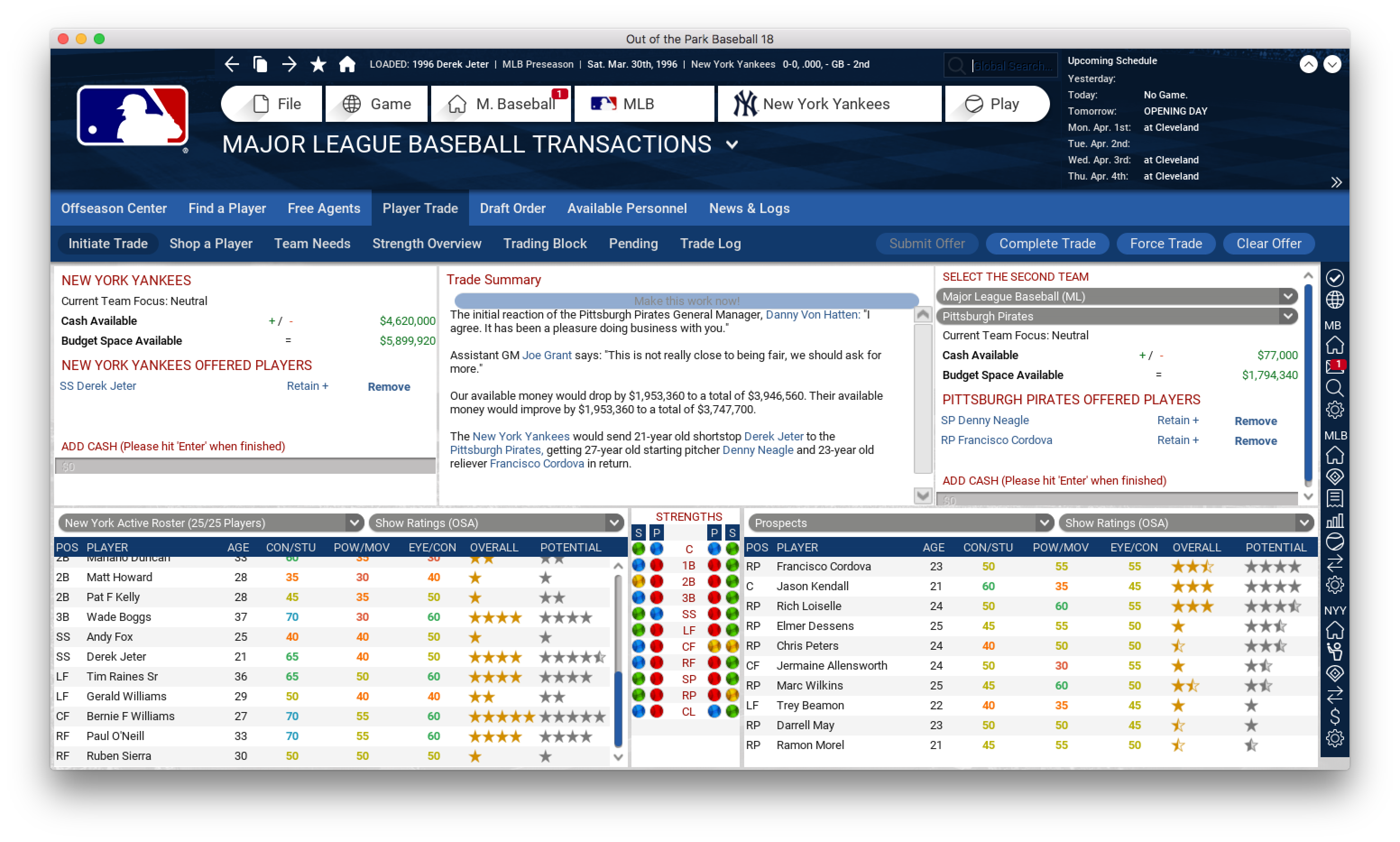 Okay, fine, Joe, I'll see if I can get another prospect out of the Bucs. I add Jermaine Allensworth to the deal, and the Pirates don't flinch. Joe wants me to get even more out of the other team, but I figure I should quit while I'm ahead. (Okay, sure, this is Derek Jeter we're talking about, but let's not forget that this is a simulation, and his career could turn out very different than it did in real life.) 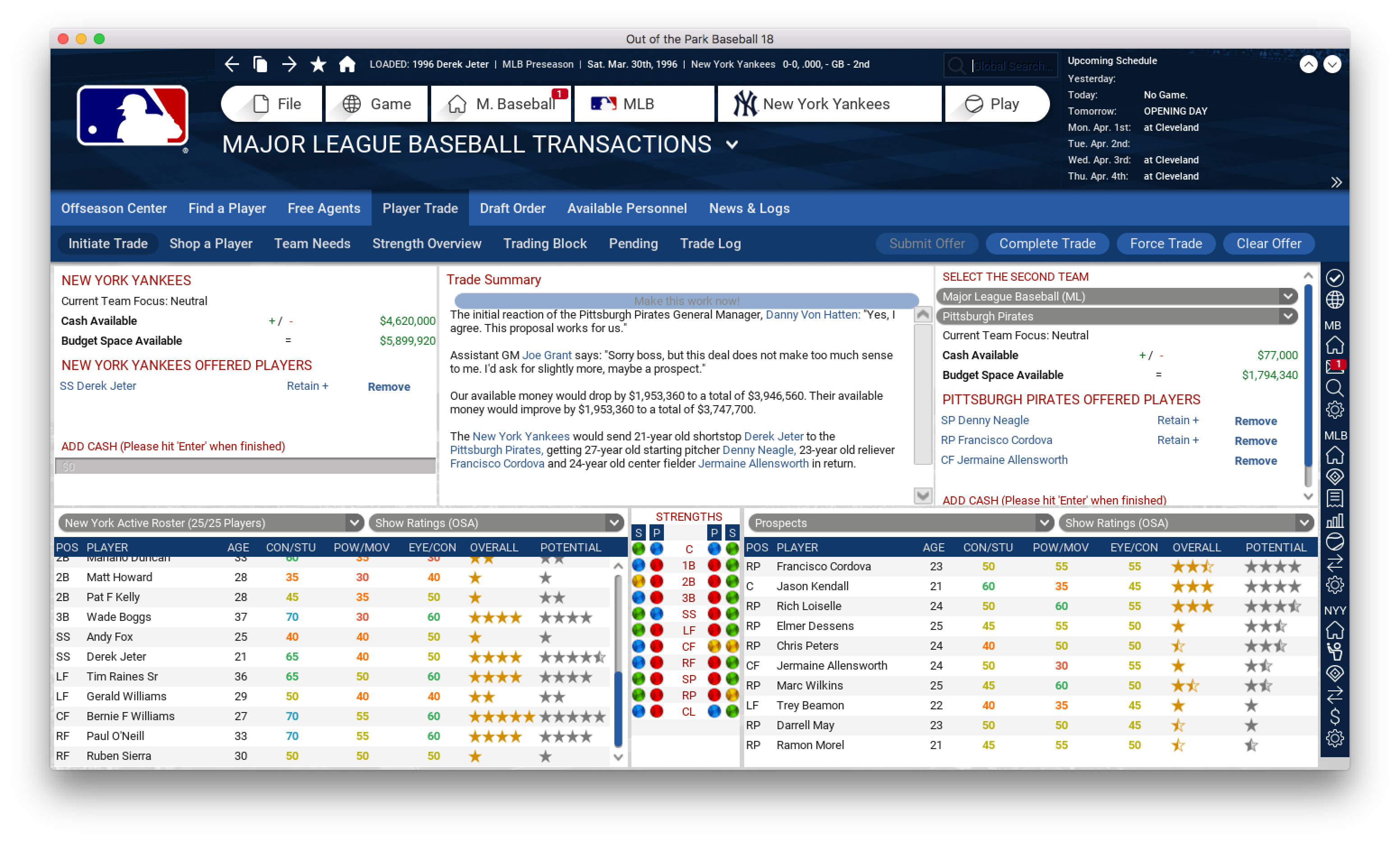 I seal the deal. Behold a new road to travel, thanks to OOTP Baseball: 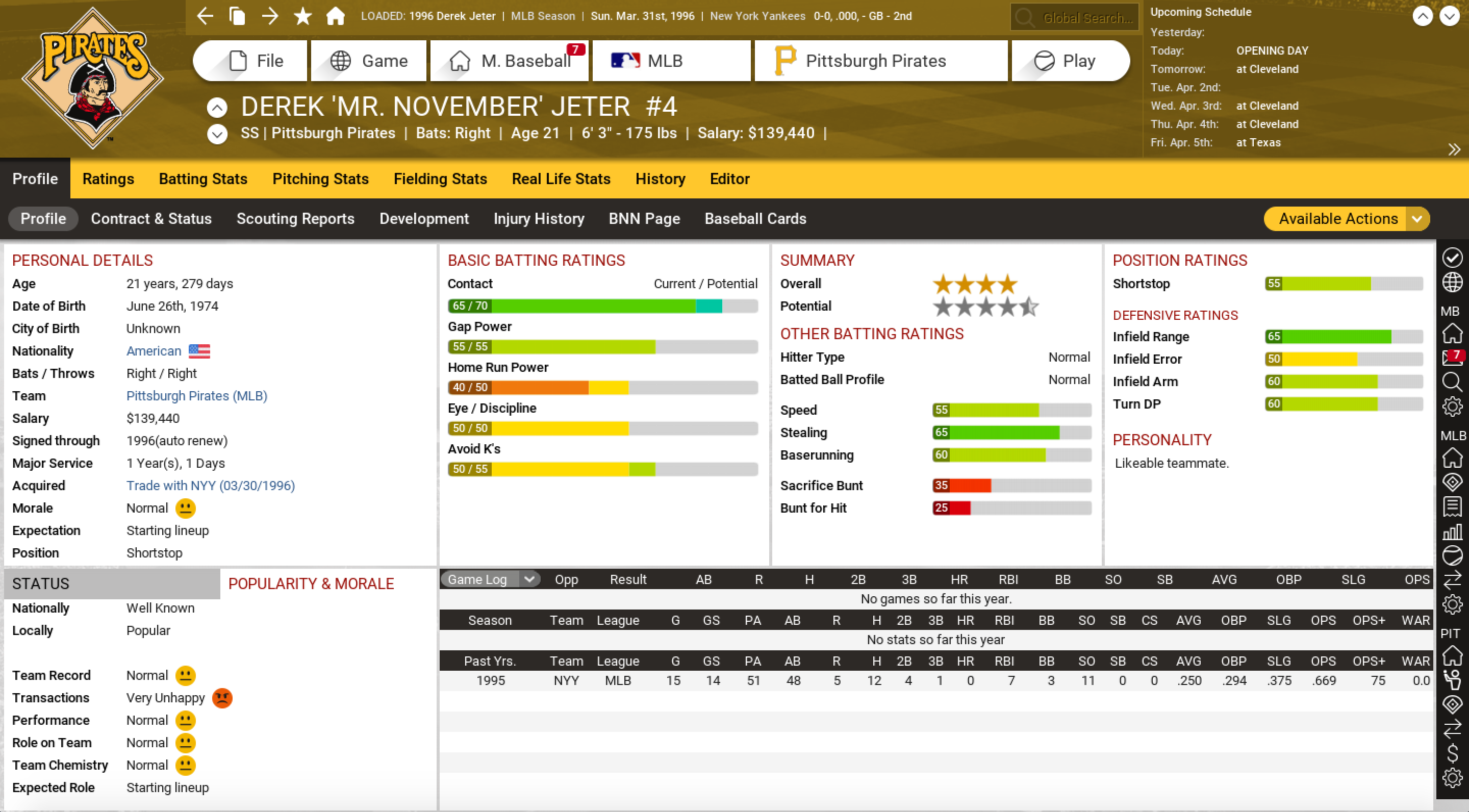 Unsurprisingly, Jeter's morale has taken a hit from the transaction, while Neagle is fairly happy with the deal.
I then abruptly quit my job with the Yankees (George Steinbrenner simply couldn't appreciate my genius deal-making skills), turn on Commissioner Mode, and start simming my alternate universe to see what will happen to Jeter.
He started off his career in Pittsburgh strong, posting a .294 average with 7 home runs and 66 RBI in 155 games. He played with the team through the 2000 season, helping lead them to three straight first place finishes and World Series trips from 1997-1999 -- that final year saw the Pirates win 109 games and take the World Series, the only championship Jeter enjoyed during his career.
In 1997, Jeter signed a 6-year, $24.9 million deal with the Pirates, but, in a pattern that would carry through his career, he exercised his opt-out in 2000 and took a 7-year, $45.7 million contract with Texas. He again took an opt-out in 2003 and went to Seattle, which offered him $46.3 million over 6 years, but he cut that deal short in 2006 and headed to Boston for two years.
Jeter actually ended up back with the Yankees in 2007, signing a two-year deal for $16.3 million, and then he went to St. Louis for 2 years at $28 million total before closing his career with two small 1-year deals in Cleveland and Milwaukee. In 2015, he retired, and six days later, he was a Hall of Famer. Yes, we used our Commissioner power to waive the 5-year waiting period so we could see if he would make it into the Hall.
Of course, given a career that featured 3,077 hits with 239 home runs, 1,364 RBI, and a .315/.384/.449/.833 slash line, with 87.2 cumulative WAR, he was a lock for the Hall. Here's how his profile looked at the end of his time in Major League Baseball: 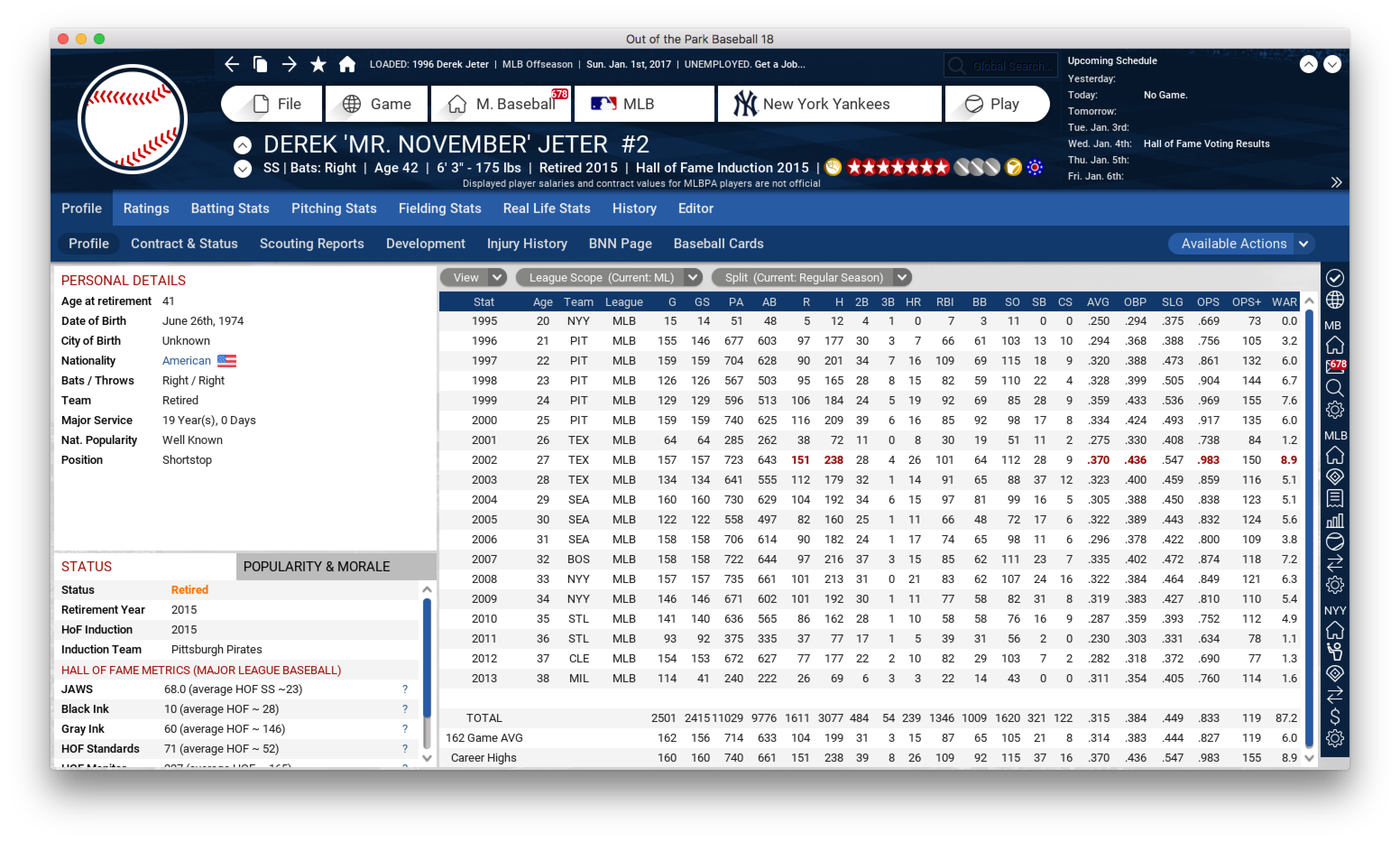 Other items of note from our sim: